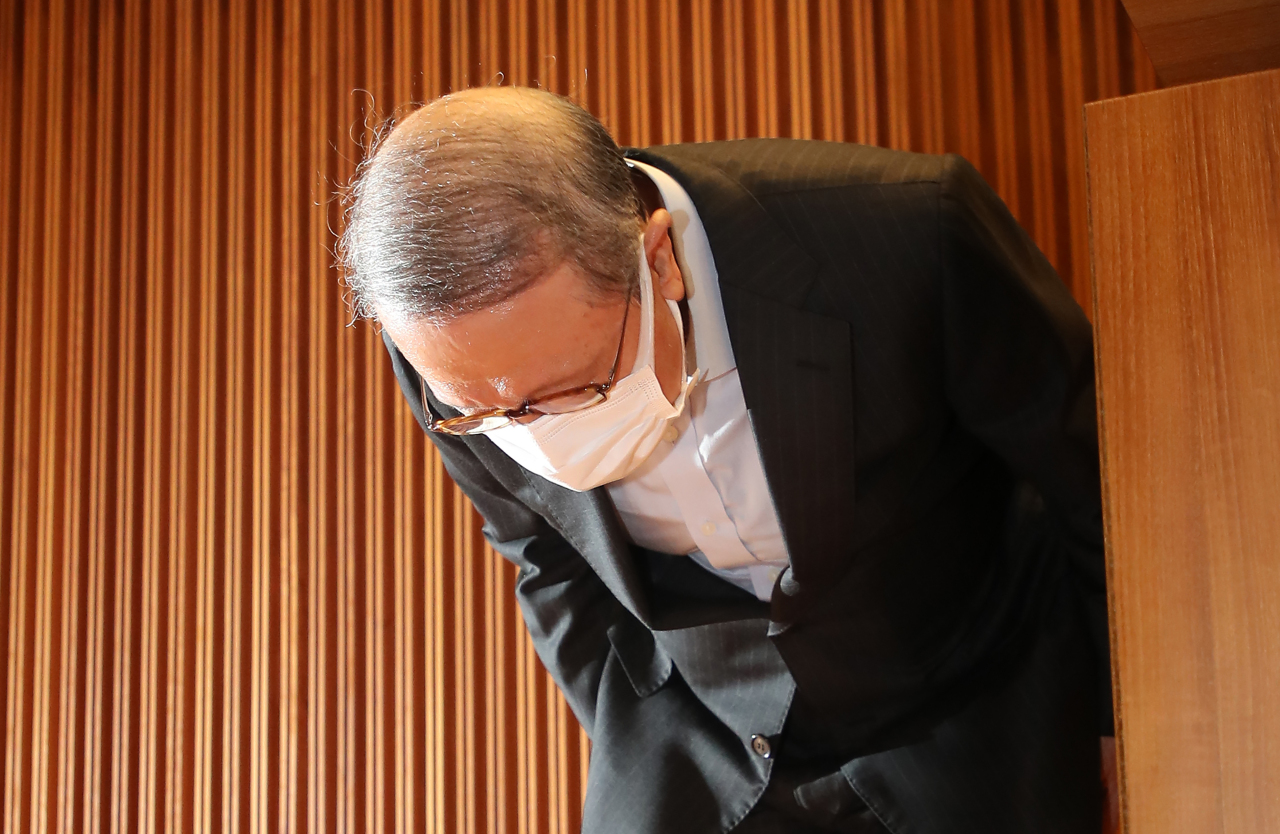 Namyang Dairy Products then-chairman Hong Won-sik bows in a show of apology on May 4 as he offered to resign from his position during a press conference in the company headquarters in Seoul. Hong was holding a controlling stake in Namyang Dairy and is expected to relinquish his voting rights in the company as Hahn & Co. has proposed to buy the shares. (Yonhap)

South Korean private equity firm Hahn & Co. is poised to buy a controlling 52.6 percent stake in Namyang Dairy Products which has been under public criticism for claiming that its yogurt drink helps prevent COVID-19, a filing showed on May 27.

Namyang Dairy’s board has agreed to sell 378,938 common shares, owned by ex-chairman Hong Won-sik, his wife and his grandson, to the country’s second-largest private equity firm for 310.7 billion won ($278.2 million), according to a disclosure submitted to the Financial Supervisory Service. Hong’s brother Myeong-sik will remain a minority stakeholder.

Hahn & Co. and Namyang Dairy inked a sales and purchase agreement on May 27, which set the deadline for the deal to close on Aug. 31. The deal will become the first announced acquisition of Hahn & Co. this year, after its takeover of inflight service operations by flag carrier Korean Air in August 2020.

Hahn & Co. said it will focus on improving corporate governance of the beleaguered company. The PEF seeks to disable Namyang Dairy’s board of directors of their authority to make decisions on the execution of company affairs and instead task independent executive directors with business management.

The news comes three weeks after Hong offered to resign from the top post earlier in May and vowed to end dynastic control over the family-owned dairy product maker. An emergency committee forced Hong’s mother and his eldest son out of the board on May 17.

Police are investigating the company for allegedly misleading customers and Sejong City’s municipal government has warned Namyang Dairy of a possible two-month business suspension should their investigation prove that they had made exaggerated claims.