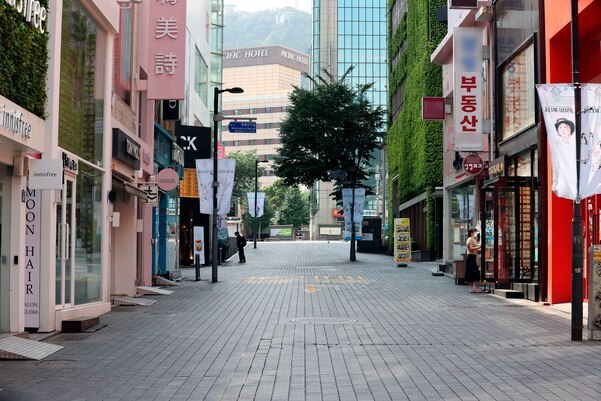 A street in Myeong-dong, one of the busiest shopping districts in Seoul, stands nearly empty. (Yonhap)

Responding to the economic fallout from the COVID-19 pandemic, South Korea’s middle-income households reduced private spending more sharply than those in the higher and lower income brackets, state-run think tank the Korea Development Institute said on May 17.

Households in the middle of the income distribution spectrum -- the third quintile, which earn 40 percent to 60 percent of the median income -- saw their consumption expenditures shrink 6.8 percent on-year in 2020, the KDI said in its report on the impact of the COVID-19 pandemic on household spending. This was far above the average 2.8 percent cut for the population as a whole.

Economists divide the population into five equal income groups, called quintiles. People in the first quintile earn the least, and those in the fifth bring in the most.

Households in the fourth quintile -- the upper 20 to 40 percent income range, also generally considered part of the middle class -- saw a 4.2 percent decrease in household spending in the same year. This was higher than the figure for the second quintile, or the bottom 20 to 40 percent, which posted 3.3 percent.

On the contrary, households in the highest and lowest brackets were less likely to tighten their belts, with the top 20 percent decreasing private consumption a mere 0.8 percent, while the bottom 20 percent increased their spending 2.8 percent.

Families belonging to the lower income brackets could spend more as their disposable income gained at a faster pace than those of middle-income households, largely due to the government’s financial stimulus packages, including selective cash handouts that targeted vulnerable social groups, the report explained.

While the disposable income of the first and second quintiles rose 7.5 percent and 4.6 percent, respectively, that of the third and fourth quintiles advanced less than 2 percent.

Disposable income is what is left of people’s salaries after they pay taxes and buy necessary goods and services, including food and shelter.

“People in the middle income bracket were most affected by the economic shock of the COVID-19 crisis throughout last year. It seems that they have responded to the protracted pandemic by reducing consumer spending, while increasing savings,” said Nam Chang-woo, a researcher at the KDI.