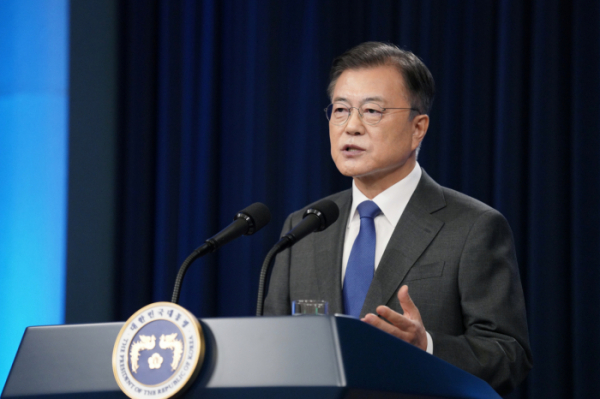 President Moon Jae-in delivers a special address at Cheong Wa Dae in Seoul on May 10, 2021, to mark the fourth anniversary of his inauguration. (Yonhap)

Transforming South Korea’s economy into a fairer and more transparent one was what President Moon Jae-in had in mind when entering office in 2017.

To soothe the public enraged over high-profile corruption involving the former president, his political archrival Park Geun-hye, Moon and his campaigners unveiled a series of economic policies pursuing the income-led and innovation-based growth, painting the rosy picture on mitigating the nation’s widening wealth disparity.

Now with his presidency remaining less than a year, however, the liberal-leaning political leader faces public anger over the real estate market that saw surging prices of residential units, largely due to a series of radical regulatory measures that had an adverse impact, at least from a short-term perspective.

The set of government measures that suppressed demand for home purchases ironically resulted in the median price of Seoul apartments skyrocketing 35 percent over the past four years under Moon’s presidency, according to data compiled by KB Kookmin Bank. The rise of apartment prices in the capital pushed potential homebuyers out of the vicinity, causing market prices of apartments in surrounding Gyeonggi Province and Sejong to rise even higher.

“The main cause behind soaring housing prices was the government’s failure to comply with the supply and demand laws in the market. In general, housing prices rise amid a supply shortage. Before imposing tougher property-related regulations, the government should have expanded home supply in the capital area,” said Kwon Dae-jung, a real estate professor at Myongji University.

Abundant liquidity in the financial markets, triggered by the government’s monetary easing strategies to help the nation’s economic recovery from the COVID-19 crisis, including a benchmark rate cut, further stimulated the overheated real estate market, he added.

Following Moon’s inauguration on May 10, 2017, a series of government measures have been implemented to regulate the labor and real estate market for the income-driven growth strategy. The income-led growth initiative centered on labor-friendly policies to raise household income as well as increased social expenditures for low- and middle-income groups to reduce their basic living expenses for housing or health care.

In addition, the financial authorities enacted a total of 26 property-related policy measures so far, including mortgage regulations and tax hikes, to curb runaway housing prices, largely due to real estate speculation.

Driven by the government’s bold policy actions, the Gini coefficient -- a measure of income inequality within a population -- slipped to 0.339 in 2019 from the previous year’s 0.345, extending a downtrend since 2017, when the figure stood at 0.354, according to government data.

In the meantime, the pace of increase in nationwide housing prices remained at the 1 percent in 2019, while Seoul apartment prices showed a downward trend for the 32nd consecutive week in June since November 2018, according to the Ministry of Land, Infrastructure and Transport.

These positive signals, however, didn’t last long, due to the regulatory measures’ side effects, coupled with unexpected external downside risks caused by the COVID-19 pandemic, according to market experts and data.

“The growing number of small and medium-sized companies from which nearly 80 percent of job openings in the labor market come out, responded to the government’s employment regulations by cutting back on hiring,” said Shin Se-don, an economics professor at Sookmyung University.

Beset further by the economic fallout from the COVID-19 crisis, the employment rate for people aged 15 and older posted 58.6 percent in February, down 1.4 percentage points on-year, marking the lowest for the month since 2013, according to data from Statistics Korea.

“A balance between private and public sector is crucial for achieving income-led growth or alleviating economic disparities exacerbated by the COVID-19. In its final year, the Moon administration should shift its focus on hard-line labor policies to relaxation of regulations on private companies so that they could boost investment and increase employment,” said Kang Sung-jin, an economics professor at Korea University.

As a higher priority was given to income distribution, the government has yet to yield tangible outcomes in terms of boosting future growth models to pioneer new markets, especially in the finance sector.

During his election campaign, Moon pledged to nurture North Jeolla Province, or Jeonbuk into the county’s third global financial hub through infrastructure investment. Seoul and Busan were already designated as financial centers in January 2009, to attract global financial firms and talents to the local financial markets.

But the envisioned plan was put to one side for years as political parties are divided over the development project’s feasibility as well as stalled discussions over the issues between the financial authorities, including the policymaking Financial Services Commission, and local financial institutions, a FSC official said.

Some market experts say the authorities’ tight grip on local financial companies runs counter to the government’s pledge to innovate the local financial sector, which was a part of the Moon Jae-in administration’s 100 policy tasks unveiled in July 2017.

“To foster the finance industry, the FSC and related government agencies ramped up policy measures to introduce innovative financial businesses like MyData and open banking over the past four years,” said Lee Joon Young, an economics professor at Sangmyung University.

“However, the financial authorities’ regulatory moves, including a 20 percent dividend cap for local banks, have placed a significant burden on financial firms, which already faced difficulties in digital finance sector due to an uneven playing field with their big tech rivals.”

Despite negative public sentiment and disappointing figures, Moon appears to be sticking to his commitment to the income-led growth campaign.

“With a goal of alleviating economic disparities across the nation, the government has pushed for ‘income-led growth’ and other inclusive economic policies, which have become the driving force to help households and businesses tackle the prolonged COVID-19 pandemic,” he said at a press conference marking his final year on Monday.

“Public opinions remain divided about the policy’s impact on the local market, but it is clear that job security and social safety nets have been improved,” Moon said, citing related government measures, including the minimum wage hike and transition of irregular workforce to a permanent status in the public sector.