Altcoins back in rally mode after pull-back 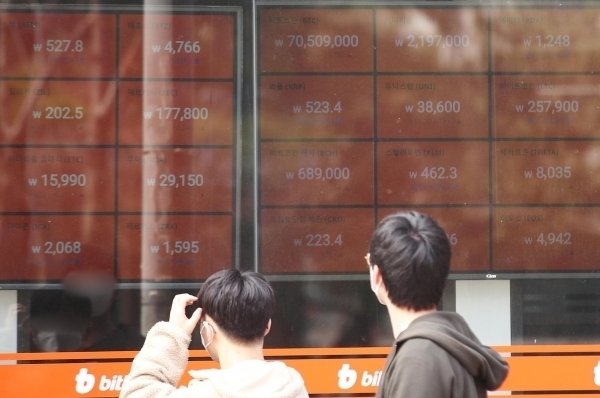 Cryptocurrencies have been rallying again with some digital coins, like Dogecoin and Ethereum, hitting record highs recently.

The prices of coins tumbled last month as governments around the world hinted that they would strengthen regulations on cryptocurrencies, which have no intrinsic value.

The European Investment Bank, a lending arm of the European Union, issued two-year digital notes, utilizing the Ethereum technology, and the news is believed to have sent the price of the digital coin to a new high. The coin increased as much as fivefold in value this year, from 803,000 won on Jan. 1 to 4,226,000 won on May 3.

Other coins, excluding Bitcoin, which are together referred to as altcoins, also jumped in price.

Dogecoin, which has been in the limelight thanks to the support of electric car maker Tesla CEO Elon Musk, rallied 20.97 percent May 3 to reach 548 won. The coin, which started as a joke to satirize cryptocurrencies in 2013, has seen its value skyrocket this year. The market cap of Dogecoin has surpassed $50 billion, higher than social media giant Twitter and car manufacturer Ford.

Some market watchers have said demand for altcoins has been on the rise since Bitcoin, the largest cryptocurrency in the world, has quickly risen in value in recent months.