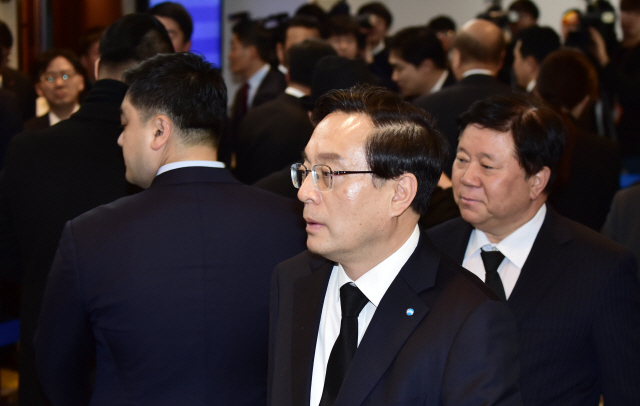 The penalty puts further pressure on Sohn, who is already in a legal fight against the Financial Supervisory Service over its sanction slapped on him for another misselling issue.

Sohn was reprimanded with the third-strongest sanction out of the FSS’ five-tier penalty system, which would prevent him from working in the financial sector for at least three years following the end of his current term. Sohn’s current and second term ends in March 2023.

The FSS said that it initially planned to slap Sohn with the second-highest sanction, but lowered it by a notch to take into account Woori’s decision last month to heed the watchdog’s recommendation to compensate investors who were dealt heavy losses due to Woori Bank’s selling of the troubled funds.

In line with Sohn’s punishment, Woori Bank was ordered partial suspension of its businesses -- likely tied to the lender’s fund sales -- as well.

The total value of Lime funds missold by Woori amounts to roughly 357.7 billion won, the largest amount sold by a commercial lender here.

But in order for the FSS’ decision to take legal effect, it would need the policymaking Financial Services Commission’s final approval.

Industry watchers said that Sohn is likely to file suit against the FSS if the FSC decides to stick to the current level of punishment without further alleviation.

Sohn is currently engaged in a legal battle with the FSS concerning a separate case involving the watchdog‘s punishment for Woori Bank’s misselling of derivatives-linked products that caused investors to incur massive losses in 2019.

The DLF products were designed to return high profits when the interest rates of major economies stayed above a certain level. However, they turned into losers as bond yields in the US, Britain and Germany unexpectedly sank amid speculation at the time that central banks in major economies might aggressively cut their interest rates.

The FSS’ punishment for Woori’s industry rival Shinhan Financial Group and its flagship Shinhan Bank regarding their roles in the misselling of Lime funds is slated to be announced after an arbitration settlement committee meeting on April 22. The watchdog has already sent advanced warning that Shinhan Bank CEO Jin Ok-dong is to receive the third-highest level of the five tiers of punishments and Shinhan Financial Group Chairman Cho Yong-byoung the second-highest sanction. They are likely to be alleviated following the April 22 committee meeting.

Lime Asset Management, once viewed as one of the fastest-growing hedge funds in Korea, froze all its assets in 2019 citing illiquidity. It has since refused requests from over 4,000 individuals and 580 enterprises to redeem their investments.

In the meantime, Lime was found to have run a Ponzi scheme, misrepresented its asset performance and colluded with fund sellers to conceal its financial losses.