SK chief unveils $22b investment plan in meeting with Biden 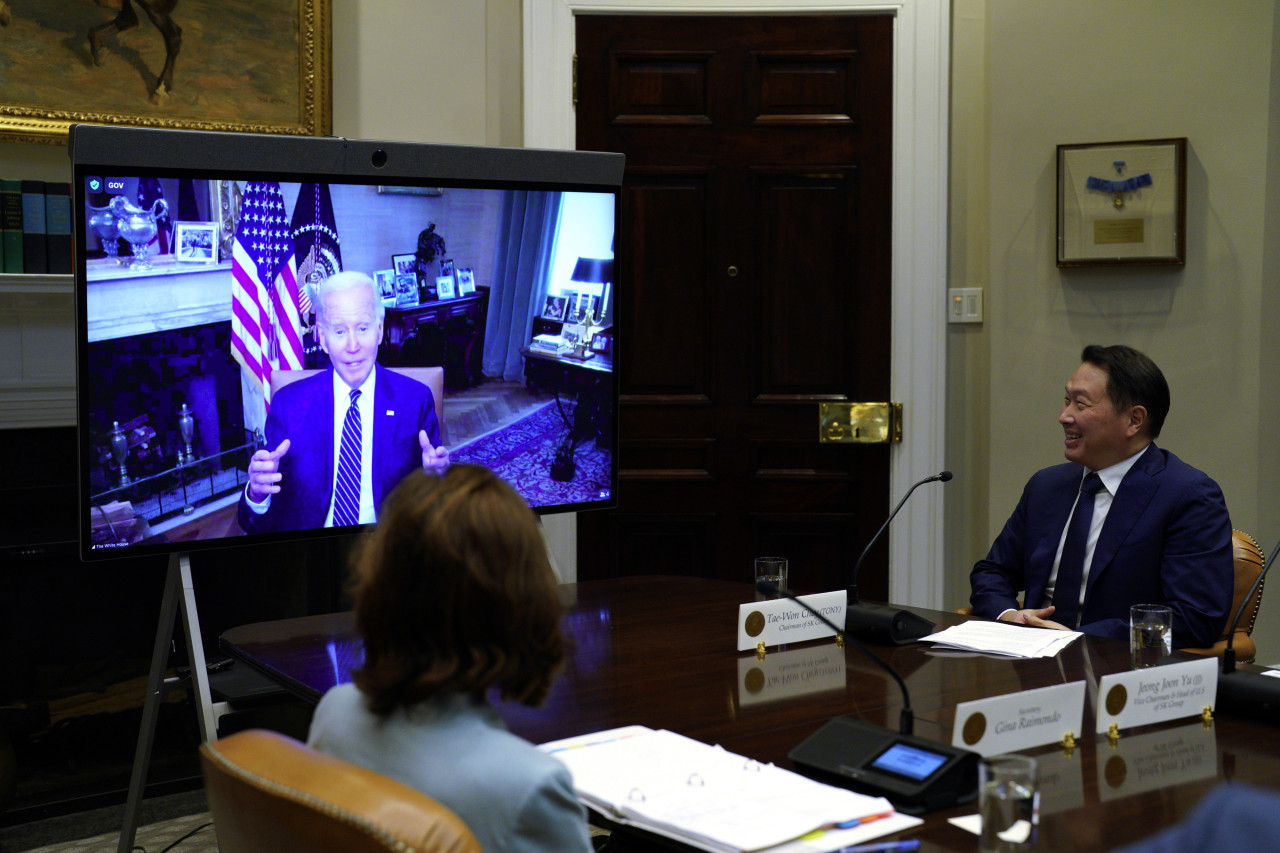 President Joe Biden appears on screen as he meets virtually with SK Group Chairman Chey Tae-won in the Roosevelt Room of the White House in Washington, on Tuesday. (AP-Yonhap)

SK Group Chairman Chey Tae-won on Tuesday (US time) announced South Korea’s second-largest conglomerate’s new $22 billion investment plan in the US in his meeting with President Joe Biden at the White House.

Biden, in return, touted SK’s new multi-billion dollar commitment as one of the “most significant investments” ever seen in the US.

“We are announcing another $22 billion in new investment in the US,” Chey told the US president.

“All this means that SK will invest in nearly $30 billion going forward, expanding on our recent announcement of $7 billion investment in EV batteries.”

Their rare one-on-one meeting was held virtually as Biden was still recovering from COVID-19. Other participants of the meeting include US Secretary of Commerce Gina Raimondo and SK hynix CEO Park Jung-ho.

In October last year, Chey announced plans to invest a combined $52 billion into the US by 2030. Tuesday’s announcement is part of the plans.

“By uniting our skills and innovation, we will be able to manufacturer the technologies that create the critical changes that are needed both for our countries,” he added.

Of the $22 billion investment, Chey said almost half the total is expected to enhance the semiconductor ecosystem in the US, including building a new packaging plant there as well as funding research and development programs in partnership with local universities.

SK’s chip-making unit SK hynix has no production base in the US. The world’s second-largest memory chipmaker operates a packaging plant in China.

Advanced chip packaging is a burgeoning market as demand is soaring for more sophisticated chips for artificial intelligence, 5G and autonomous driving.

The chipmaker said nothing had been decided yet on details, including site and timing.

About $5 billion will be poured into other green energy sectors, including ultra-fast EV charging systems, green hydrogen, battery materials and recycling, and also small modular reactors.

The rest of the investment will be spent on SK’s push for bioscience and biopharmaceutical sectors in the US, including the development of treatment for cell and gene therapy.

The new investment plan comes after a series of commitments were made by SK companies in the US recently.

SK On, which recently launched a new joint venture with Ford, called BlueOval SK, plans to build three battery plants – one in Tennessee and two others in Kentucky. A combined 5.1 trillion won ($3.9 billion) will be injected to produce 129-gigawatt hours per year, with plans to start production from 2025 in phases.

The battery maker is also building two $7 billion battery cell plants in Georgia, with the construction set to be completed by next year.

Earlier, SK said it planned to invest a combined 247 trillion won by 2026 to boost its semiconductor, battery and bioscience businesses, of which 68 trillion won would be invested in overseas markets.

The high-profile meeting between Chey and Biden was held in the Roosevelt Room of the White House, with Biden speaking from his official residence. The meeting lasted for more than 30 minutes, during which Biden affectionately called the tycoon by his English name “Tony.”

In recent months, Biden has held a series of meetings with South Korean chaebol leaders.

During his visit to Seoul in May, he looked around Samsung Electronics’ chip-making complex, with Vice Chairman Lee Jae-yong offering him a personal tour. During the visit, he also met with Hyundai Motor Group Chairman Chung Euisun. Both Samsung and Hyundai announced plans to expand production facilities in the US.