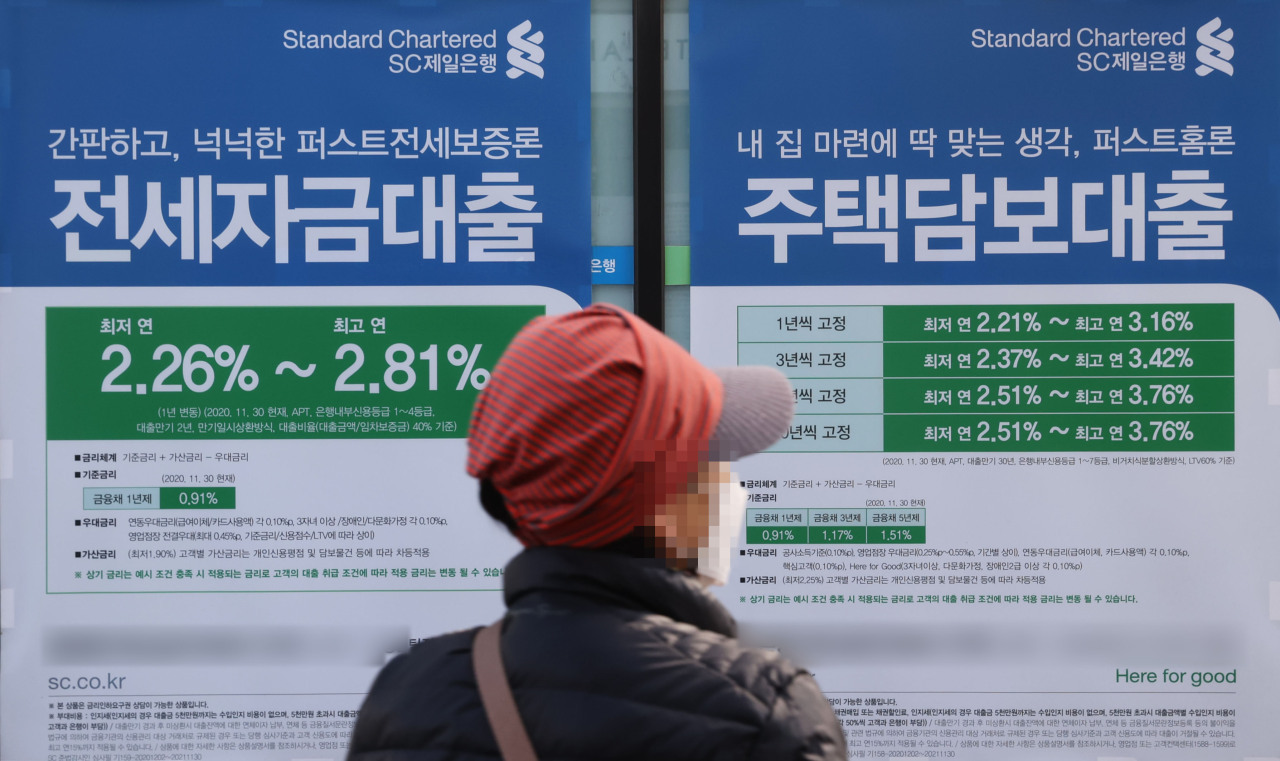 A pedestrian passes by a commercial bank promoting jeonse and mortgage loans, on Sunday. The FSC is considering toughening up rules for the current debt service ratios, or DSR, as part of its additional debt control measures. (Yonhap)

South Korea‘s major banks are set to loosen control on extension of “jeonse” loans for homes, but their tightened grip over personal credit loans will continue under pressure from financial authorities, industry sources said on October 17.

Jeonse is a housing lease system unique to Korea whereby tenants pay a lump-sum deposit instead of monthly rent on a two-year contract.

NH NongHyup Bank, which in August decided to temporarily stop offering jeonse loans until Nov. 30, will resume its jeonse lending services starting on October 18. Shinhan Bank will begin to discard its borrowing limit of 500 billion won ($423 million) for loans taken out for home rental on the same day, they said.

Meanwhile, starting Oct. 27, the nation’s five major lenders -- KB Kookmin Bank, Shinhan Bank, Hana Bank, Woori Bank and NH NongHyup Bank -- will provide jeonse loans with their amount not to exceed gains in the price of jeonse apartments. For instance, those who saw jeonse prices rise from 400 million won to 600 million, the upper limit of loans would be 200 million.

The banks’ cap on the size of jeonse loans is aimed at preventing borrowers from rushing to stock purchases or the so-called “gap investment,” a situation where a buyer purchases a home occupied by a jeonse tenant, who pays a lump-sum deposit that must be refunded when the lease expires, to profit from the difference between the price of the home and the amount of the deposit.

The latest move came after the policymaking Financial Services Commission, on October 14, vowed to ease regulations on jeonse loans to protect people who actually need to borrow to rent a home to live in.

“For loans taken out for jeonse in October, November and December, the cap on aggregate loans will be applied in a flexible manner,” said FSC Chairman Koh Seung-beom.

“We will tolerate it even if the growth rate of outstanding household debt exceeds the targeted range if that is due to a rise in loans for jeonse.”

The financial authority earlier urged local lenders to bring the annual increase of household debt to between 5 percent and 6 percent this year, compared with a growth of 7.9 percent last year.

Despite the government’s partial relaxation of loan rules, borrowers are likely to be turned down for personal credit loans or other types of mortgage loans amid banks’ strict lending standards.

Hana Bank, for instance, will halt extending credit loans for property purchases from October 20 until the end of this year, while Woori Bank plans to lower favorable interest rates charged on the bank’s 11 lending products, in a move to slow growth in credit loans.

To cope with a sustained rise in credit loans, the FSC is expected to unveil additional debt control measures, with a focus on the current debt service ratios, or DSR -- a limit on personal borrowing based on disposable income -- by the end of this month.

Since July, a borrower has been limited to loans that involve repayments of 40 percent or less of annual income if the borrower buys a home worth more than 600 million won in select regions, including Seoul and its surrounding areas.

Possibilities remain for the authorities to expand the scope of the current 40 percent DSR, industry sources said.