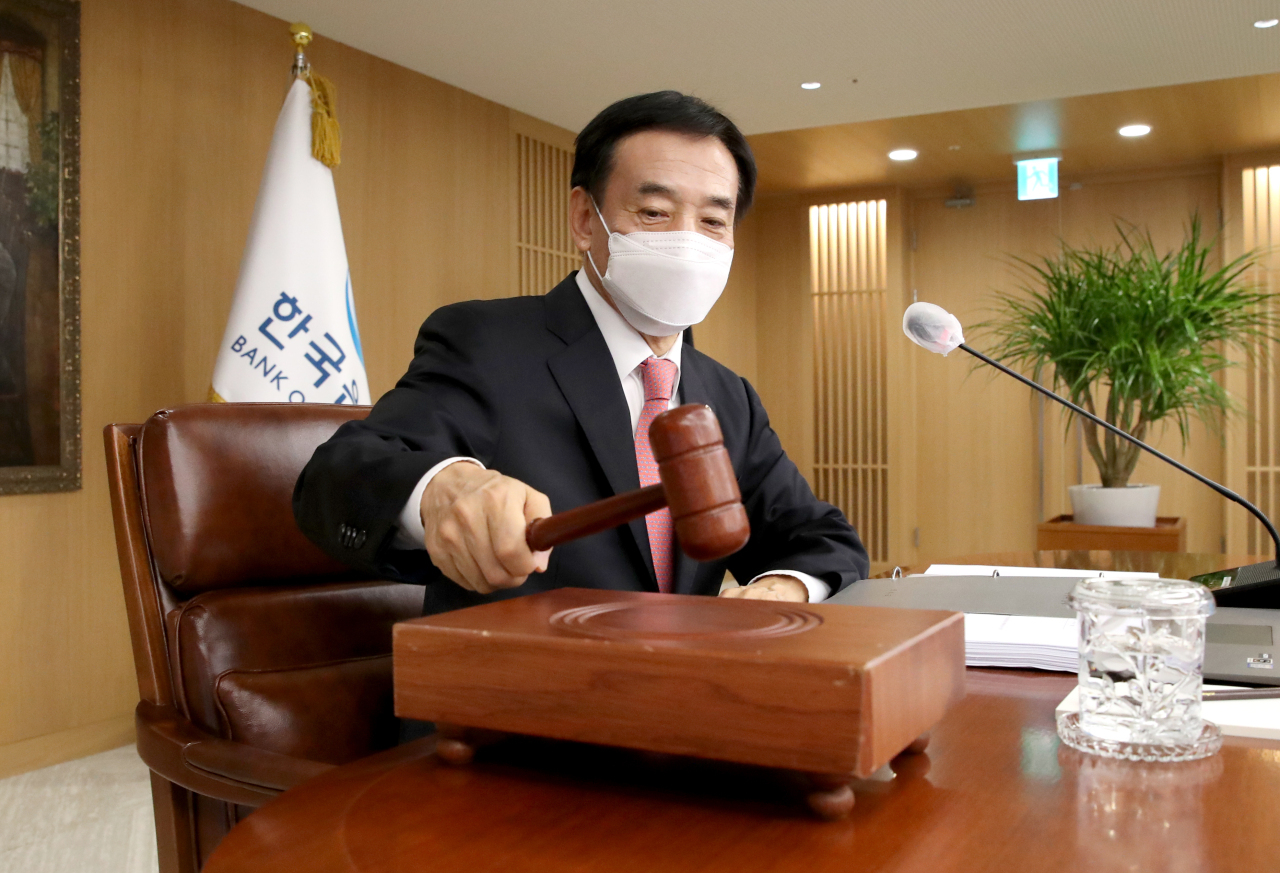 South Korea’s monetary policy chief said on October 12 that the central bank may carry out its second rate hike in the pandemic-era next month, after deciding to keep the rate steady at 0.75 percent until then.

“When we made our rate hike decision in August, we mentioned that we would adjust the level of our monetary easing in tandem with the pace of the economic recovery,” Bank of Korea Gov. Lee Ju-yeol said in a briefing tied to rate-setting meeting on October 12.

“We have decided to freeze the key rate for now, but if the economic recovery heads in the direction of where the monetary policy board expects, then an additional rate hike (in November) could be considered,” he added.

The BOK in August delivered its first pandemic-era rate hike, raising its key rate by 25 basis point from a record low of 0.5 percent. This wrapped up 15 months of record-low interest rates, after the BOK cut the base rate by a combined 75 basis point between March and May 2020, to provide cushion for the economy following the outbreak of COVID-19 early last year.

Lee mentioned that two out of the seven members of the monetary policy board proposed a 25 basis point rate hike during the latest rate-setting meeting, saying decision made on October 12 was not unanimous.

For inflation this year, the BOK maintained its annual 2.1 percent forecast made in August, which it had raised from its earlier projection of 1.8 percent. But Lee warned that the forecast is likely to be raised due to the surging global oil prices.

“If global oil prices and overall energy prices continue to hike, the forecast for this year is likely to be raised, considering their usual effects on Korea’s inflationary pressure,” Lee said.

West Texas Intermediate crude futures, the US oil benchmark, crossed $80 per barrel last week for the first time since November 2014. Experts have been expressing concerns over rising energy prices in both Korea and the global market. The state-run Korea Electric Power Corp. is poised to raise electricity bills in the fourth quarter this year, the first time since November 2013, citing the surging price of global liquefied gas.

The BOK has set its mid-term annual inflation goal at 2 percent.

The central bank kept its 2021 growth forecast for Asia’s fourth-largest economy at 4 percent, citing the solid vaccination rate here, despite the ongoing fourth wave of the virus. As of October 11, the first-shot vaccination rate stood at 77.9 percent, while the rate of full vaccination came to 59.6 percent, according to the nation’s health authorities. Meanwhile, the daily number of COVID-19 cases has stayed in the quadruple digits since July 7.

On the nation’s surging housing prices, the monetary policy chief kept a cautious stance, saying the market needs further monitoring to be assessed.

Finance Minister and Deputy Prime Minister Hong Nam-ki recently said in a parliamentary audit that the gain in housing prices have been slowing down, citing recent BOK data. But Lee explained that the real estate market is affected by factors other than central bank data that is focused on recent price forecasts and indexes reflecting property purchases.

South Korea’s housing prices in the first nine months of this year spiked nearly 12 percent. It surpassed the annual gains observed in 2001 and 2006, when the instability of the local real estate market, triggered by the previous financial crisis, concerned onlookers and buyers, data from KB Kookmin Bank’s real estate platform Liiv showed earlier this month.