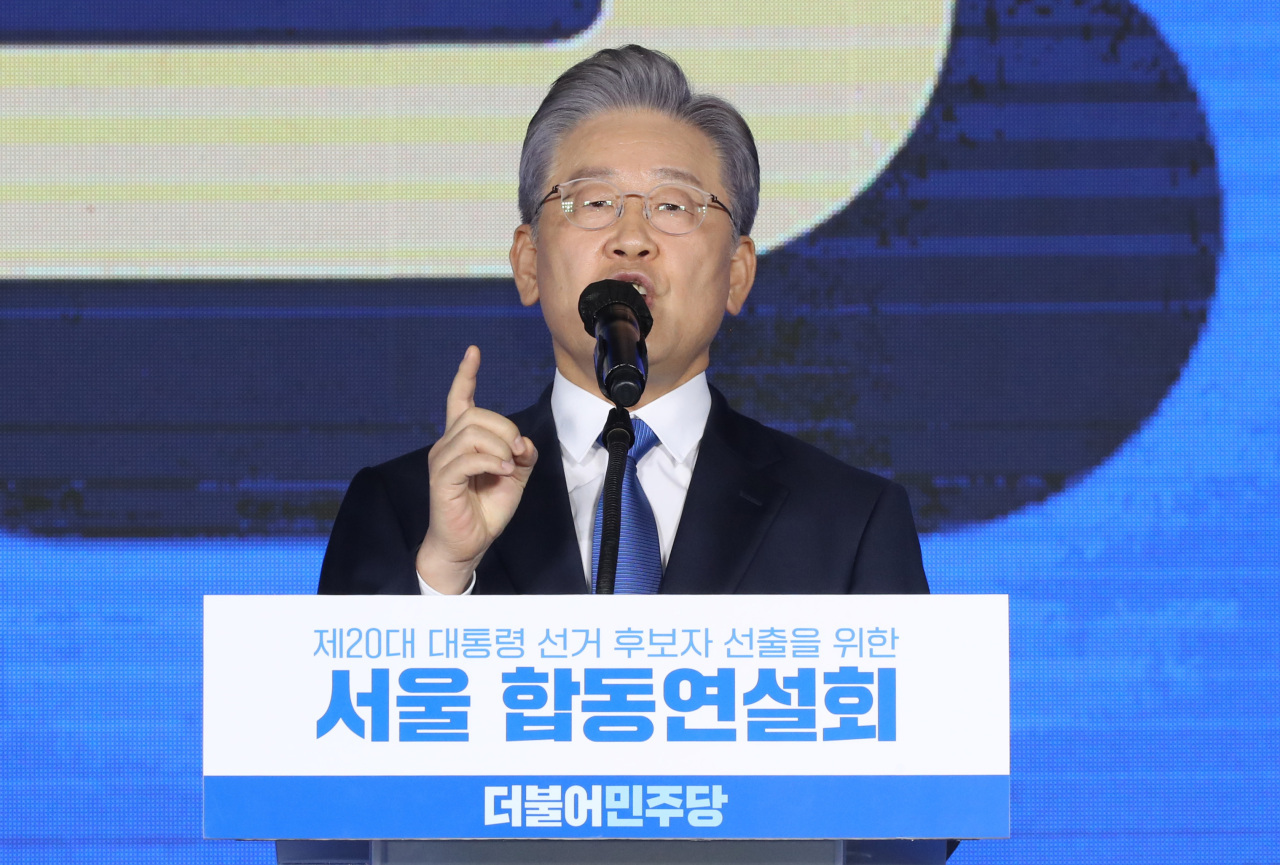 Gyeonggi Gov. Lee Jae-myung, named presidential candidate of the ruling Democratic Party Oct. 10, vowed to adopt universal basic income if elected, claiming that he would turn South Korea into the world’s first nation offering the subsidy package, even to the wealthy.

In his acceptance speech on Oct. 10, Lee highlighted his “basic agenda package,” which is expected to be the backbone of his economy policy if elected president. The package, which consists of a universal basic income plan, a basic housing program and a basic loan scheme, has immediately sparked divided responses from onlookers for its impact on the economy and lack of resources.

Lee plans to ultimately raise the bottom line to 1 million won within his years in office.

But the universal basic income plan has received criticism from experts and opposition lawmakers alike who ask how much taxpayers’ money it would require to materialize.

Lee said earlier that he plans to finance the scheme by introducing fresh taxes on land holdings and carbon emissions.

According to a report released by an opposition lawmaker last month, the basic income scheme would require the government to draw up an additional five-year budget of 252 trillion won to be paid for. The report released by People Power Party Rep. Choo Kyung-ho was based on data compiled by the National Assembly Budget Office.

Lee, on Oct. 10, addressed the current conditions of the housing market, which the Moon Jae-in administration have failed to cool down, despite more than 20 sets of measures announced since 2017. The measures focus on slapping more taxes on those who own multiple homes and implementing tenant-friendly rules.

Lee vowed to carry out powerful real estate reforms “to rid the country of the stigma of a republic of unearned real estate income,” worrying multi-home owners that heftier taxes that could come.

On loans, Lee guaranteed to launch long-term loans with favorable conditions and interest rates for borrowers. Borrowers would be able to subscribe to special checking accounts with overdraft line of credit.

“The concept of universal basic income requires the government to draw up large additional budgets every year,” Sung Tae-yoon, an economics professor at Yonsei University said.

“Unless the country has the means to rake in profit annually, like the Middle East and crude oil, and plans to funnel it solely through taxpayers’ money, without cutting back on the existing welfare programs, then the plan would not be easy to manifest,” he added.

Lee won the ruling Democratic Party’s nomination for president Oct. 10, in an expected victory. The 56-year-old human rights lawyer-turned-politician won 50.29 percent of all votes cast in the course of the party’s 11-round primary since early last month, followed by former Prime Minister Lee Nak-yon with 39.14 percent.

In his victory speech, Lee said he will take a leaf out of US President Franklin D. Roosevelt’s book in overcoming an economic crisis through left-wing policies, drawing parallels between the current COVID-19 pandemic and the Great Depression of the 1930s.