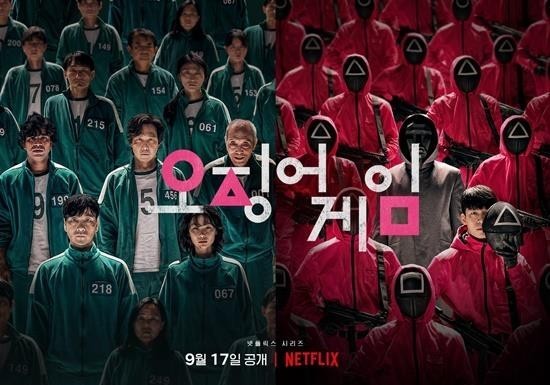 A poster for the Korean series “Squid Game” (Netflix)

Tving -- the country’s leading streaming service provider, run by entertainment and media firm CJ ENM -- recently set out to lure investments from private equity funds at home and abroad in partnership with Nomura Securities, according to industry sources on October 7.

Tving plans to sell its new shares, worth 300 billion won ($255.4 million). The envisioned investments would drive up its corporate value to a maximum of 2 trillion won, which was calculated based on the price-to-sales ratio, or the market price of its stock versus its net sales, they said.

Assuming that the platform’s nearly 1.5 million subscribers pay at least 7,000 won per month, its annual sales would exceed 126 billion won. Given that the corporate valuation of domestic and foreign streaming companies is generally seven to 10 times higher than their sales, Tving might be worth about 1.5 trillion won.

Originally launched by CJ ENM as an online video-on-demand service in 2010, Tving separated from the mother company last year and partnered with production company JTBC Studios. It earlier announced plans to invest more than 400 billion won over the next three years and expand its market share to over 5 million paid subscribers by 2023.

The latest move is aimed at raising new funding to foster the video-streaming platform’s original content. It comes at a time when global rivals like Netflix and Disney+ -- slated to be launched in Korea in November -- are eyeing a greater slice of the local streaming media service market, fueled by the “Squid Game” bonanza. The new survival drama topped daily charts in all 83 countries where Netflix streams, shining a global spotlight on Korean media content.

Led by the rampant popularity of “Squid Game,” entertainment-related stocks remained strong despite the Kospi’s downslide.

In the meantime, the benchmark Kospi fell 53.86 points, or 1.82 percent, to close at 2,908.31 points on Wednesday, the lowest finish since Dec. 30 amid ongoing investor concerns over the growing debt crisis faced by Evergrande Group, one of China’s biggest property developers.

Tving’s drive to beef up investments is expected to add fuel to the already fierce competition in Korea’s streaming services market.

Wavve -- a joint venture between the country’s top wireless carrier, SK Telecom, and broadcasters KBS, MBC and SBS -- in March unveiled plans to invest 1 trillion won in content over five years. SK Telecom has decided to finance the plan by issuing 100 billion won worth of new stocks.

Seezn, a digital streaming service operated by KT, is planning to create over 100 original series by 2023 with more than 400 billion won in investments. Meanwhile, KakaoTalk’s in-app TV service Kakao TV aims to create about 240 shows or series with a 300 billion won investment by the same year.

Investments from global streaming platforms are likely to further heat up the Korean entertainment scene. For instance, US streaming giant Netflix, which has injected 770 billion won into domestic content production over the last five years, plans to invest another 550 billion won into Korean projects this year alone.

“The over-the-top market has seen substantial growth in Korea and abroad amid the stay-at-home trend driven by the prolonged COVID-19 crisis,” said Lee Ki-hoon, an analyst at Hana Financial Investment. “On the back of the growing popularity of K-contents, global OTT giants like US media giants Disney+ and Apple TV are preparing to enter the local market. Fueled by the market expansion, local OTT service providers will continue to expand their investments in content production.”