No. of Korean youths who gave up job seeking surges 35% 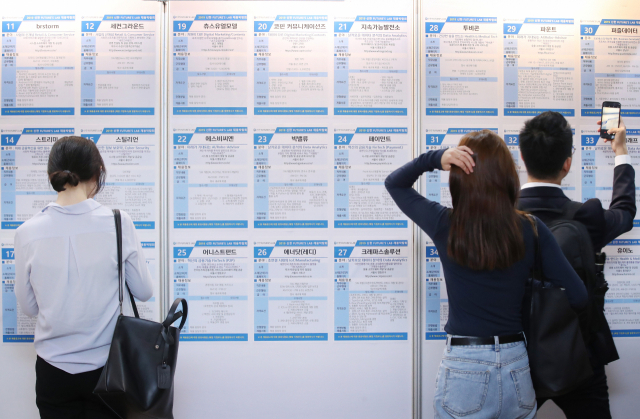 People look at a bulletin board at a startup job fair held in Seoul in 2019. (Yonhap)

South Koreans aged between 15 and 29 who were unemployed, not engaged in schooling or housework, and were not seeking jobs increased some 35 percent on-year, data showed on September 14.

As of May, 96,000 were classified as those “not in education, employment, or training” or “NEET,” data compiled by Yonhap News Agency showed. The figure increased 35.8 percent or 25,000 on-year from 71,000 the previous year. They were among a group of 278,000 people within the same age range who has not been employed for more than three years and are considered “long-term unemployed.”

NEET is a term that originated from the United Kingdom in the late 1990s and is often used in Korea, Japan and other countries to describe those not seeking work.

The Korea Economic Research Institute said in 2019 that South Korea incurred an annual economic loss of 49.4 trillion won ($42.1 billion) from NEETs aged between 15 to 29. The number of young NEETs has been growing as well, the private think tank noted.

There seemed to be fewer young NEETs in high-income, highly educated families, KERI said, indicating that those from disadvantaged families are more prone to give up on job searching.