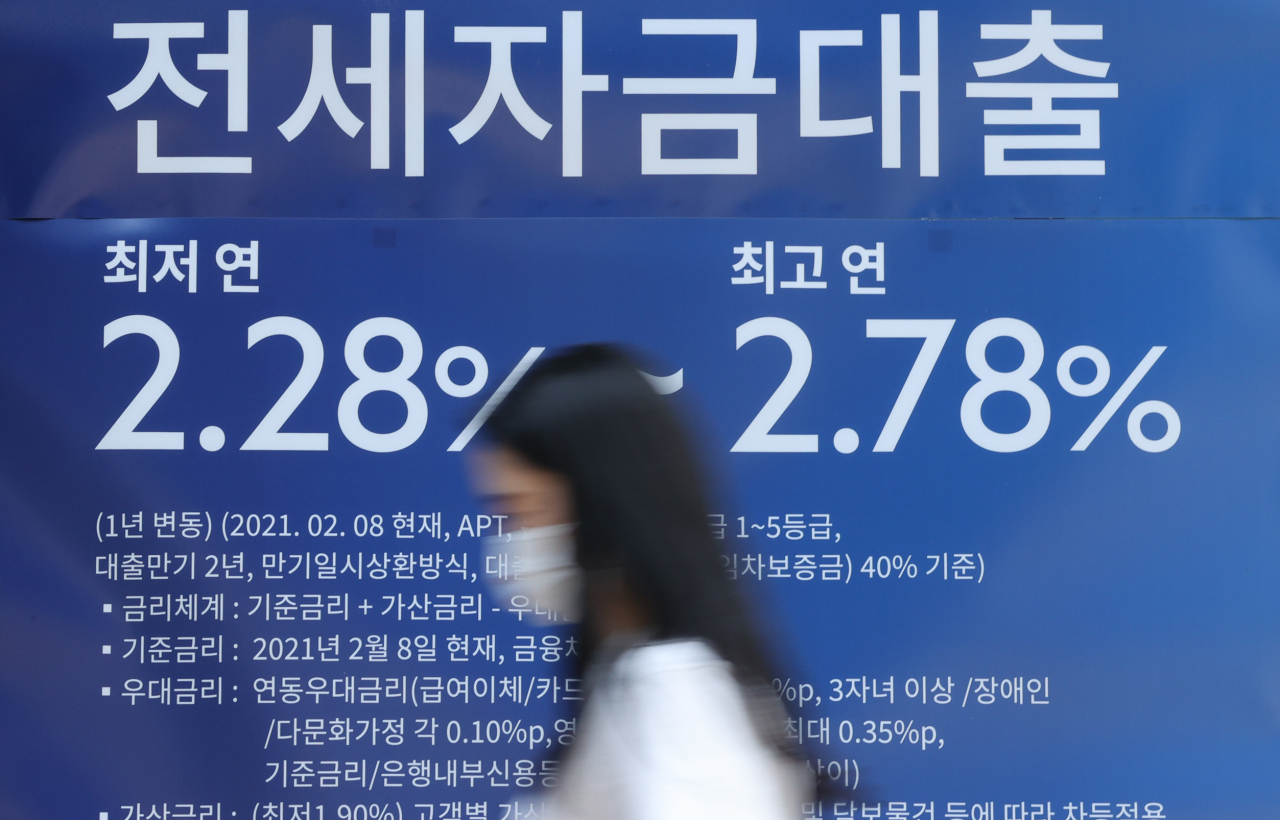 A pedestrian passes by a commercial bank promoting jeonse loan in Seoul on Thursday. (Yonhap)

The sum total of all loans extended to South Koreans in their 20s and 30s to pay their “jeonse” rental deposits has more than doubled since President Moon Jae-in took office in 2017, data showed Sept 9. This reflects the harsh reality that more and more young people are ditching hopes of homeownership and renting instead.

Jeonse is a rental system where the tenant hands over a large lump sum to the landlord -- on average, about 65 percent of the value of the property -- in lieu of rent. The deposit is returned to the tenant at the end of the contract, usually after two years.

Outstanding jeonse loans extended by the five major commercial banks here to borrowers in their 20s had increased nearly sixfold to 24.3 trillion won ($20.7 billion) as of end-June, compared with the same month in 2017, watchdog Financial Supervisory Service data submitted to a lawmaker here showed. The gain is nearly double the amount seen for other age ranges over the cited period.

The data reflects the massive hurdles that Koreans in their 20s and 30s face when looking to purchase homes in the nation’s heated real estate market. The tragedy is that people in their 30s usually want to become homeowners.

According to the Korea Real Estate Board, in the first half of the year, 28.4 percent of apartments purchased in Gyeonggi Province were bought by those in their 30s, while the corresponding figure in Seoul came to 36.5 percent.

The average price of an apartment unit measuring 82.4 square meters jumped around 80 percent from 660 million won in 2017 to 1.19 billion won in 2020, according to civic group Citizens’ Coalition for Economic Justice. The organization analyzed 63,000 apartments in 22 apartment complexes in Seoul.

“The gap between those who settled for jeonse loans and actual homeowners -- both in their 20s and 30s -- is getting wider,” Rep. Kim Sang-hoon of the People Power Party said.

“If the authorities and the financial institutions continue to restrict access to jeonse loans, people in their 20s and 30s will only suffer further,” he added.

On top of it, Korea is facing a jeonse shortage, with homeowners cautious of signing jeonse contracts in the first place, preferring monthly rent now that the Moon administration’s tenant protection laws have taken effect. The laws allow jeonse contracts to be automatically extended once, and they stop homeowners from raising jeonse deposits more than 5 percent at the time of automatic renewal.

The average jeonse price in Gangnam-gu, a well-known affluent area of Seoul, has jumped 58 percent since the Moon administration took power in May 2017, data compiled and released by real estate data platform 10,000-lab showed earlier this month. The average jeonse price for apartments in the area jumped by some 58 percent to 40.2 million won per 3.3 square meters as of August, compared with 25.3 million won in May 2017, according to the same data.

Commercial lenders have been temporarily suspending new mortgage, jeonse and other home-related loans, under pressure from the authorities to put the brakes on the nation’s snowballing household debt. The Bank of Korea ended its 15-month interest rate freeze by hiking the key rate 25 basis points to 0.75, up from a record low, also as part of this effort.

Meanwhile, the employment rate for Koreans in the 15 to 29 age range came to 42.2 percent, 14.6 percentage points below the average employment rate for people in the same age range in the US, the UK, Germany, Japan and France as of end-2020, a report released Thursday by the Korea Economic Research Institute showed. It was also below the Organization for Economic Cooperation and Development’s average of 50.8 percent.