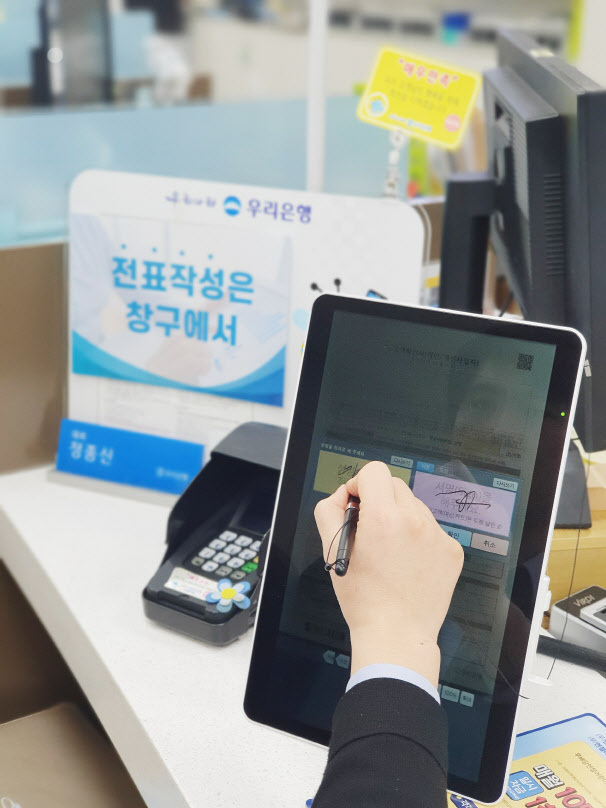 This article is part of analysis and interviews by The Korea Herald’s finance desk staff exploring South Korea’s budding ESG investment market, as well as its potential, impact and challenges. -- Ed.

Of all the changes stemming from the banking sector’s embrace of environmental, social and governance values in recent years, according to 53-year-old Shin Hae-jin, the one that stands out most is the absence of paper in “paperwork.”

“Since last year, I’ve noticed that whenever I go to open or deal with a savings account, the documents are signed through tablet PCs installed in every booth,” said Shin, who has been a loyal customer of Woori Bank for more than 30 years.

“The employee also always double-checks if I really want to make a paper bankbook, which was just handed to me without any questions a few years ago,” she added.

All five of the nation’s largest banking groups -- KB, Shinhan, Hana, Woori and NH -- have either launched special ESG task forces or hired ESG experts as outside directors in hopes of keeping pace with the nation’s 73.4 trillion won ($64.7 billion) Green New Deal Policy. The steps they have taken center on the environmental aspects of ESG financing.

As Shin noticed, a key step is to minimize paper waste.

KB Kookmin Bank launched a campaign in June last year dubbed “KB Green Wave” that encouraged the use of less paper in photocopy machines and promoted savings accounts with better yields for those who established mobile-only or online-only accounts.

“The company actually cut our budget for paper for our copying machines,” a Kookmin official said.

“It’s frustrating sometimes, but it’s also something that we know we have to get used to.”

Overall, the issuance of paper bankbooks dropped 10 percent on-year in 2019 and the decline seems to have gained momentum since then, industry data showed.

Electric vehicles are another key area where the banking sector is striving to “go green,” with the firms shifting toward electric vehicles for company cars and setting up charging stations near their headquarters and their brick-and-mortar branches.

Woori Bank is an industry trailblazer in the area of electric vehicles. 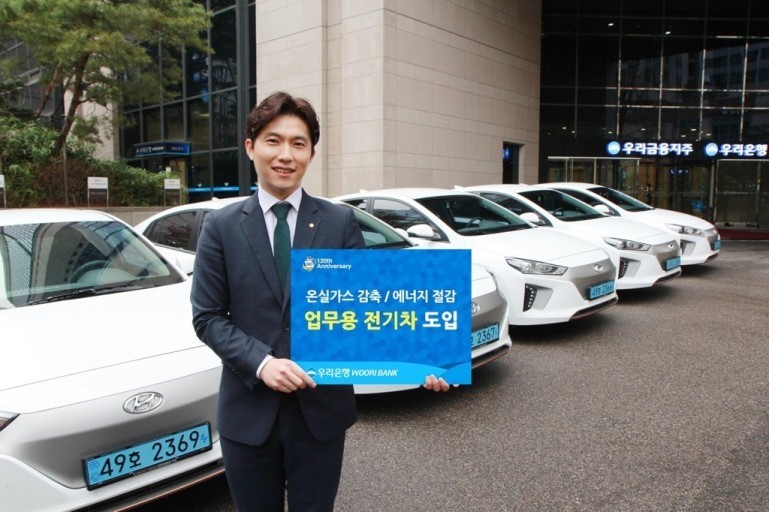 The firm started out with five electric company cars in 2019 and had expanded that number to 16 by the end of last year. It currently operates two charging stations, one at its headquarters in central Seoul and one at its comprehensive research and development center in Sangam-dong, western Seoul. The bank plans to make all of its company-owned cars electric vehicles by 2025 as part of a green partnership with the Seoul Metropolitan Government that began in 2017. It will also set up additional charging stations at 10 branches by the end of the year.

Other lenders are either in the early stages of adopting electric vehicles or plan to do so by the end of the year.

NH NongHyup vowed to expand the number of EVs by at least 20 after beginning its own transition in February. Shinhan plans to purchase and use at least 30 EVs by the end of the year.

On the business side, loan benefits for firms that meet certain ESG criteria are gaining popularity among lenders, alongside the issuance of ESG bonds.

As of March 29, Korean banks had floated won-denominated ESG bonds worth a combined 1.7 trillion won so far this year, according to data from the Korea Exchange. This accounts for 70 percent of the ESG bonds issued throughout last year, which together were worth some 2.4 trillion won.

Despite this slew of green campaigns, industry watchers say it will take much longer for ESG values to be truly incorporated into banks’ core business areas such as project financing.

Since the beginning of the year, the chiefs of all five major banking groups here have pledged support for “coal-free” financing, saying they intend to halt all project financing for coal-fired power plants and the purchase of bonds tied to coal “from now on.”

But their declarations drew flak as the banks had no plans to discontinue existing project financing for coal-fired power plants.

The state-run Export-Import Bank of Korea last year, for example, was selected to finance a $2.2 billion project to build the 1,200-megawatt Vung Ang 2 power plant in northeastern Vietnam.

According to a local civic group, the Korea Sustainability Investing Forum, KB Financial Group provided a total of 6.3 trillion won for coal-related projects from 2009 to 2020, coming in at No. 1 in terms of investments made by banking groups. NH followed with 3.5 trillion won, and Shinhan came in at No. 3 with nearly 1.2 trillion won.

Of their flagship banking units, NongHyup came in at No. 1 with 676.9 billion won in the cited period while Shinhan and KB Kookmin trailed behind with 366.7 billion won and 333.3 billion won, respectively.

“Though it is important for financial institutions to refrain from coal financing, the manufacturing industry needs to support the cause in order to create a truly virtuous cycle,” a Financial Supervisory Service official said March 31 on condition of anonymity.