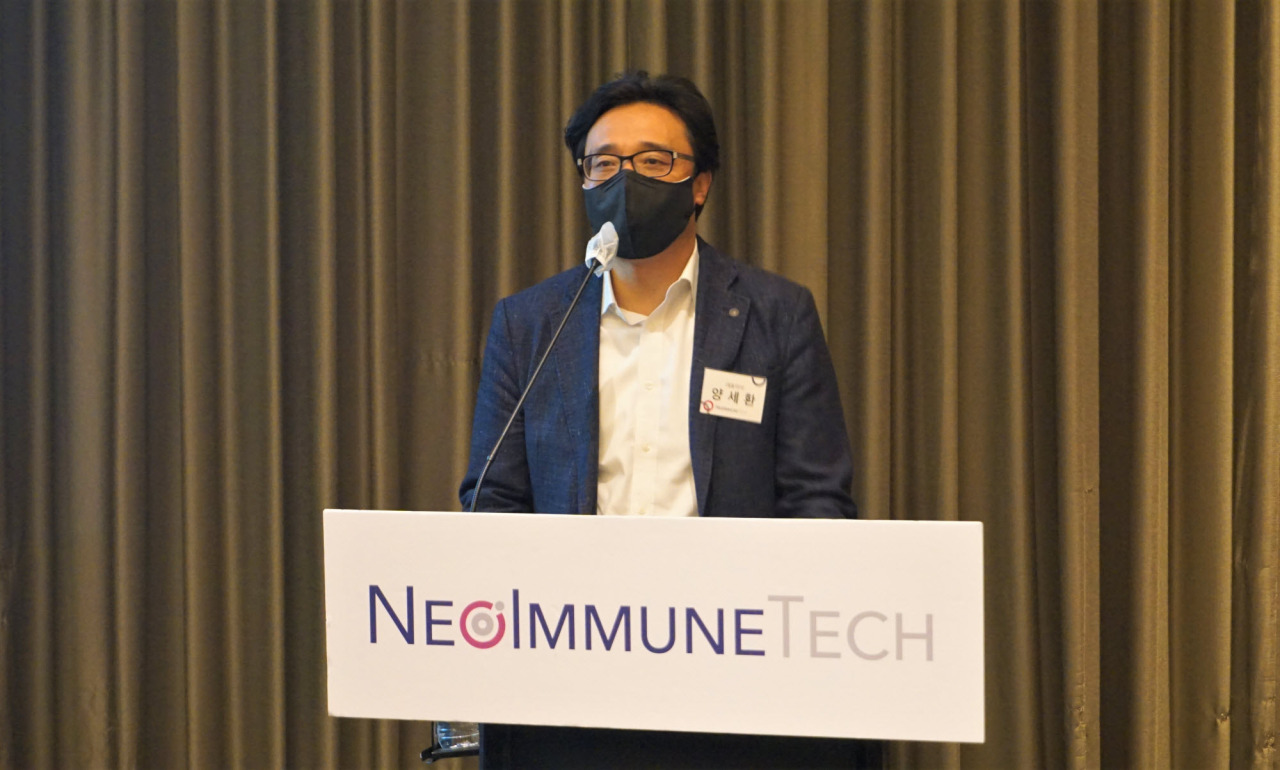 NeoImmuneTech President Yang Se-hwan speaks at a briefing in Seoul on Monday. (NeoImmuneTech)

NeoImmuneTech, a US immunotherapy drug development company, said on Feb. 22, 2021 that it was looking to raise as much as 96 billion won ($86.9 million) in fresh funds via an initial public offering on the South Korean bourse next month.

Under the plan to be listed on Korea’s tech-heavy Kosdaq, NeoImmuneTech seeks to issue 15 million depository receipts in a price band between 5,400 won and 6,400 won. The exact share price will be determined through a book-building process for institutional investors that is set to wrap up on Feb. 24, 2021. Hana Financial investment and Mirae Asset Daewoo are underwriting the deal.

Based in Rockville, Maryland, the firm was established in 2014 as a spinoff of Korea-based new drug developer Genexine. Genexine is the largest shareholder of NeoImmuneTech, owning a 25.31 percent stake, the officials said.

NeoImmuneTech has focused on developing immunotherapeutic treatments based on T cells. Its major pipeline is NT-I7 -- an interleukin-7 pipeline stabilized with a patented technology -- which is designed to induce T cell proliferation and help the body fight serious disease.

“Our foray into expanding NT-I7 business is crucial, as the technology can also diversely be used with other anti-cancer products and infectious disease drugs for other treatments. We’ve signed contracts with global pharmaceuticals such as Merck, BMS and Roche for joint clinical trials for further developments,” NeoImmuneTech President Yang Se-hwan told reporters at a briefing in Seoul.

To reinforce the company’s pipelines, he explained, the IPO proceeds will be used mainly for clinical tests, research and development, and the construction of manufacturing facilities. He stressed the firm’s plans to maximize value and competitiveness by going public.

“We will put all our efforts into developing innovative treatments for immune and infectious diseases. We’re especially anticipated to make the next leap forward to become a leading company in the global immune-oncology market,” Yang added.

Followed by Psomagen, NeoImmuneTech is expected to become the second overseas company to be listed on the Kosdaq market via a “special listing on promising technology growth.” The listing procedure measures a firm’s potential for scalability instead of profitability, in cases where technological advances cannot easily be measured.