Retail investors had submitted nearly 5.19 trillion won in deposits as of 1 p.m. during the first day of the two-day preorder session for stocks of Big Hit Entertainment, they said. 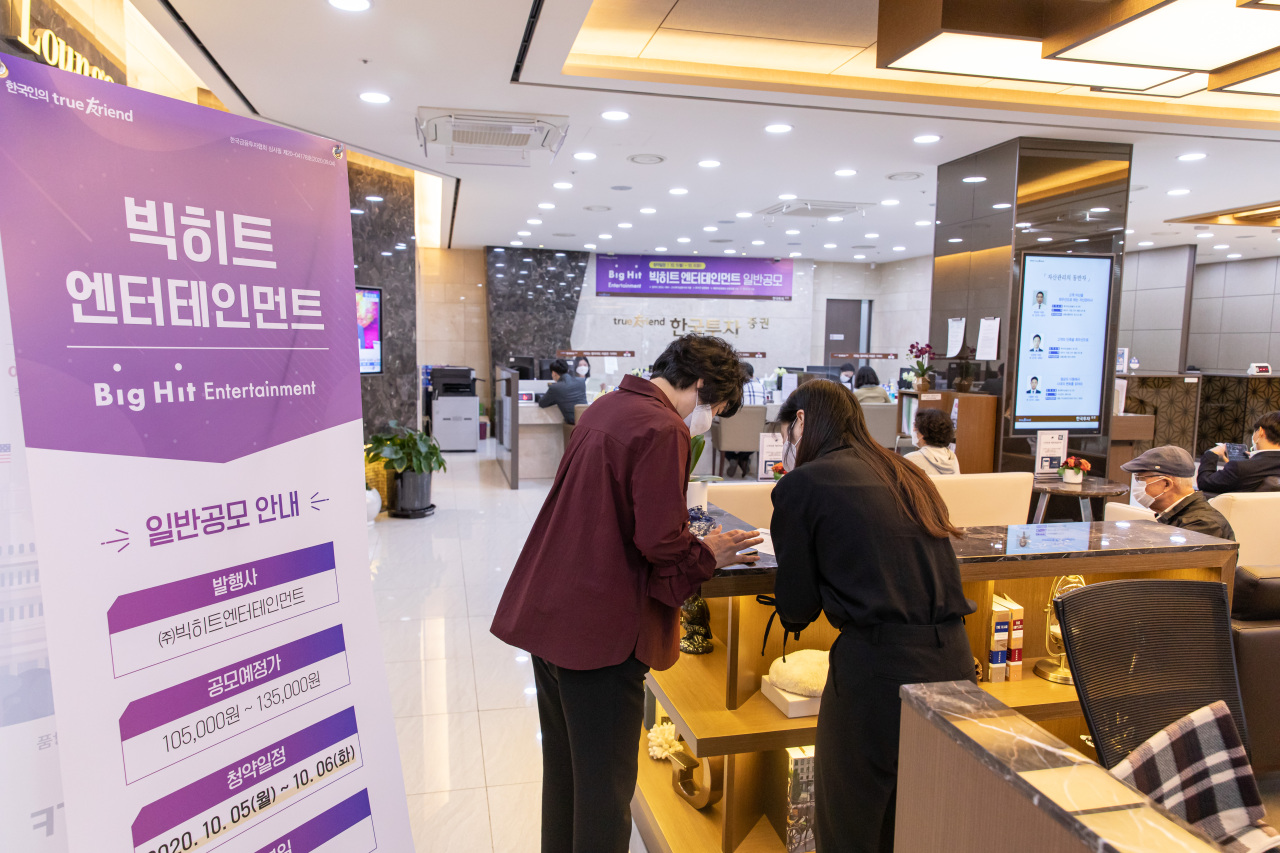 Potential investors visit a brokerage office in Seoul Monday to apply for the public subscription of Big Hit Entertainment on the first day of the agency’s initial public offering on the nation’s main bourse Kospi. (Korea Investment & Securities)

While some 1.42 million shares, or 20 percent of the company’s total offering, are to be sold under the planned IPO, some market watchers previously forecast that Big Hit might break Kakao Games’ record. Last month, retail investors chipped in some 58.55 trillion won in subscription deposits for the game publisher’s stock. That competition also marked 1,524.85 to 1.

Two trading sessions prior to SK Biopharmaceuticals and Kakao Games’ retail tranches, the net asset value of CMAs also surged, marking 60.93 trillion won and 56.39 trillion won, respectively, but the figures were far lower than during the agency’s IPO, the data showed.

While both market experts and investors wait to see whether Big Hit will log record-breaking IPO subscription numbers, its two-day tranche will wrap up Tuesday at 4 p.m.

Amid heated competition, some investors said they even borrowed money from local banks to make enough deposits for the subscription to win a single 135,000 won share.

A 35-year-old surnamed Shin borrowed about 40 million won from a local bank to make a deposit of some 1.5 trillion won for Big Hit’s shares. Over some 2 percent of the bank’s annual interest rate was not the obstacle for him.

“I have been trading stocks for nearly 6 years and this is not even the first time for me to make a deposit for a public subscription. But borrowing money from a bank just for the event is my first time experience,” Shin said.

“Before making the decision, I’ve heard news saying that if the preorder competition reaches 1,000-1, an individual has to park 67.5 million won to win over a share. I wish I can win over at least one share, It’s my earnest desire for now.”

The K-pop agency is also slated to make its market debut on the nation’s main bourse Kospi market on Oct. 15.