Kakao Games shares soar for 2nd day in row, leaps to No. 3 on Kosdaq

Kakao Games continued its bullish run on the Kosdaq market, with shares spiking by a daily permissible limit of nearly 30 percent for a second consecutive day on Sept. 11.

It soon rose into the third most valuable stock on the Kosdaq, with its market capitalization nearing 5.94 trillion won, just 621.6 billion won behind No. 2 player Seegene.

A day earlier, Kakao Games made headlines with its market debut, becoming the fifth most-valued stock on the tech-heavy market, with a market cap of nearly 4.57 trillion won at the closing bell. 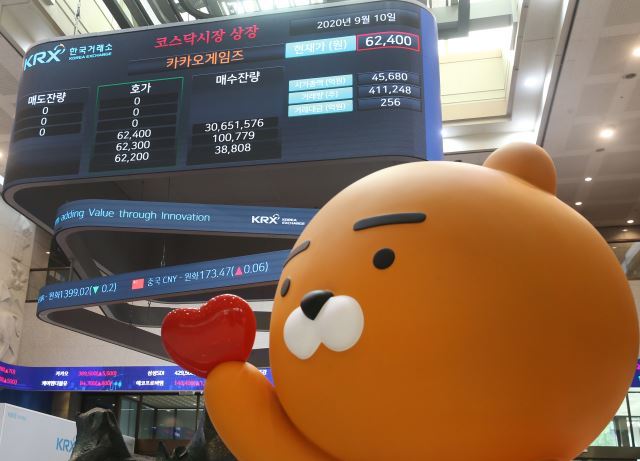 An electric board at the Korea Exchange showing Kakao Games’ market debut on Kosdaq on Sept. 10. (Korea Exchange)

Market watchers attributed the meteoric rise of Kakao Games to its parent company -- the nation’s mobile giant Kakao -- especially the synergy with the nation’s most popular mobile messenger Kakao Talk. The excess liquidity which has been heating up the local stock market could be another boosting factor.

Prior to its initial public offering, investors were highly enthusiastic about the game developer and chipped in some 58.55 trillion won as deposit payments for the shares. It was not only double the 30.99 trillion won deposited for SK Biopharmaceuticals’ IPO, but also the record-breaking subscription amount in the nation’s IPO history.

Investors and the industry are keeping a close eye on whether the firm’s stock price continuously rises to a daily permissible limit for a third consecutive session, as in the case of SK Biopharmaceuticals.

When the bio unit of South Korean conglomerate SK Group made its debut on the nation’s main bourse Kospi market in July, the stock price doubled immediately, and then rose by a daily 30 percent limit for the third trading session in a row, to over four times the offering price of 49,000 won.

“Amid the current market environment, Kakao Games shares are likely to generate a similar upturn, possibly for three consecutive days as SK Biopharmaceuticals did. The number of shares waiting to be purchased for Kakao Games has reached some 10 million, which is similar to the bio firm,” said an official from a local brokerage firm.