To keep stock market volatility at bay amid concerns that COVID-19 will continue to affect the market next year, South Korea has extended its temporary ban on short-selling activities of all listed Korean shares to March 2021. And the government is set to toughen penalties against illegal acts such as naked short selling.

Financial authorities are also hoping to build a monitoring system that allows them to detect any irregularities in foreign investors‘ borrowing and lending of Korean stocks.

A short seller borrows a stock, sells it, and when the stock price falls, buys the stock to return it to the lender. The short seller makes profit by buying the stock back at a price lower than the price it sold it for. 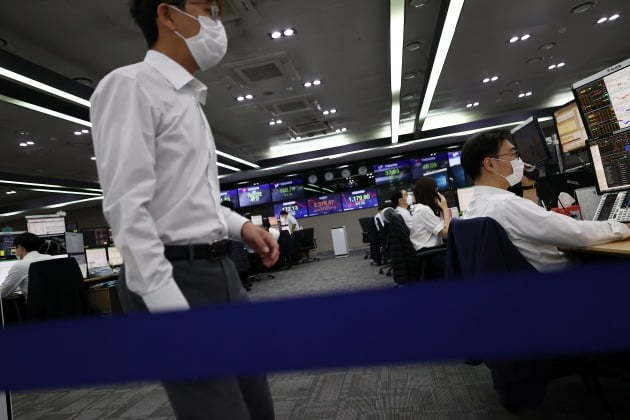 Naked short selling refers to the illegal practice of short-selling a tradable asset without first borrowing the security or ensuring that the security can be borrowed, as it is conventionally done in a short sale.

Naked short selling leaves a stock market prone to uncertainties, as failure to borrow the corresponding shares under a contractual obligation with stock lenders and the subsequent failure to settle the transaction could cause an unanticipated damage to those who attempted to buy shares from the short seller.

Witnessing the market unease, Korean authorities have prohibited naked short selling since 2000. Still, the Korean market was often seen as a hotbed for naked short selling, given that a violation of the rule carried a relatively light penalty.

Of the 101 cases of naked short selling uncovered by financial authorities here between 2010 and late last year, 94 were committed by foreign investment companies. Forty-five firms were slapped fines, while the remaining 56 were simply warned.

Only Goldman Sachs International was slapped a sizable fine of over 7.5 billion won in 2018. The fines imposed on the other 44 culprits of naked short selling amounted to about 1 billion won, combined.

The observation prompted calls for a stricter rule to eradicate naked short selling in the domestic market and an enhanced oversight on securities lending transactions.

Lawmakers such as Rep. Hong Sung-kook, Rep. Park Yong-jin and Rep. Kim Byung-wook of the ruling Democratic Party believe naked short selling occurs because the fines are not high enough to keep foreign investors from seeking profit through the illegal activity.

Rep. Hong and 14 other lawmakers proposed a bill that raises the fine for naked short selling, and allows criminal punishment of the offenders.

Rep. Park and 10 other assemblymen motioned another bill that prohibits short selling of a company’s stock when that company has done something that requires regulatory filing such as issuing new stocks to raise capital or issuing its business report. The idea is to prevent institutions or foreign investors from shorting a company’s stocks upon obtaining in advance negative information about the company.

Rep. Kim plans to table a bill later this week that allows the use of automated systems by brokerages to prevent human errors in logging the quantity of borrowed shares for short sale.

However, no legislator of the newly elected 21st National Assembly so far has proposed a bill that provides the legal basis for the government’s envisioned electronic monitoring infrastructure, dubbed Foreign Investment Management System.

Initially proposed by financial authorities in 2018, the system is designed to allow them to oversee securities lending transactions and check whether there are any discrepancies in the stock borrowing and lending by foreign investors.

The Financial Services Commission and relevant institutions such as the nation’s bourse operator Korea Exchange, its system manager Koscom Corp. and the Korea Securities Depository have concluded that establishing the monitoring system is “impossible without revising the existing capital markets law,” according to Huh Sung, deputy director of the FSC’s capital markets department.

An aide to Rep. Kim said, however, that the government‘s monitoring system is likely to cause delays in transactions, hence automated systems provided by the private sector could be a better alternative.

The offenders such as Goldman Sachs have claimed that their naked short sales were the result of human error, or errors in manually logging the quantity of stocks borrowed on the electronic trading systems.

Financial authorities agree that human error can occur as the parties involved in a short sale manually record the amount of shares to be borrowed.

“Even in advanced financial markets in the US, Europe and Hong Kong, an act of short selling typically involves manual recording of the quantity of shares that a short seller borrows. Parties involved in the short selling discuss the quantity of shares to be delivered. Then each party uses their respective securities trading system to record the amount of stocks to be delivered. A short sale order is then placed, and the stocks borrowed are delivered accordingly,” said Huh.

Some fintech companies that wish to broker stock borrowing and lending for short sellers provide automated systems for their clients, which they claim would prevent human error by enabling stock borrowers and lenders to electronically confirm the amount of stocks to be borrowed and validate the transactions.

Auh Jun-kyung, professor of finance at Yonsei University, said while it is highly possible that naked short selling is caused by such recording errors, it is difficult to prove whether the offenders’ claims are true.

“When securities firms short stocks, stock borrowing must precede. But in most securities brokerage houses, the trading desk that shorts (stocks) is run separately from the prime brokerage that does the borrowing and lending,” Auh said.

“Without an automated system, human errors can be quite common in verifying how many shares are available for borrowing before short selling. But it is still hard to find out how many of the (naked short selling) cases were actually caused by such error. It is also not easy to prove that it was not caused by human error.”