Looking for a home, whether to rent or own, is an extremely time-consuming and painstaking job in South Korea.

House hunters have to jump from one real estate agency to another to find the right one to fit their budget. Many factors contribute to this decision, including proximity to educational resources, commute times, and the neighborhood itself.

And the mission of finding a perfect house for Matthew Shampine, former general manager of coworking space giant WeWork Korea, was also difficult.

While searching for a family home, the newlywed entrepreneur, came up with an idea -- building an online platform where house hunters can get tailored information of houses on sale or on rent from seasoned local realtors throughout all the home-seeking process.”

Since his departure from WeWork in August last year, he met a number of entrepreneurs and experts in the local markets for residential real estate, startups as well as proptech -- a portmanteau of property and technology -- with co-founder and Chief Operating Officer Insong Kim. Kim was an early member of WeWork Korea and helped expand the coworking space firm in the domestic market.

“Insong and I wanted to take all the best things that we’ve learned at WeWork and apply them to this new venture,” Shampine, CEO of DN Korea, told The Korea Herald in an interview on July 7. 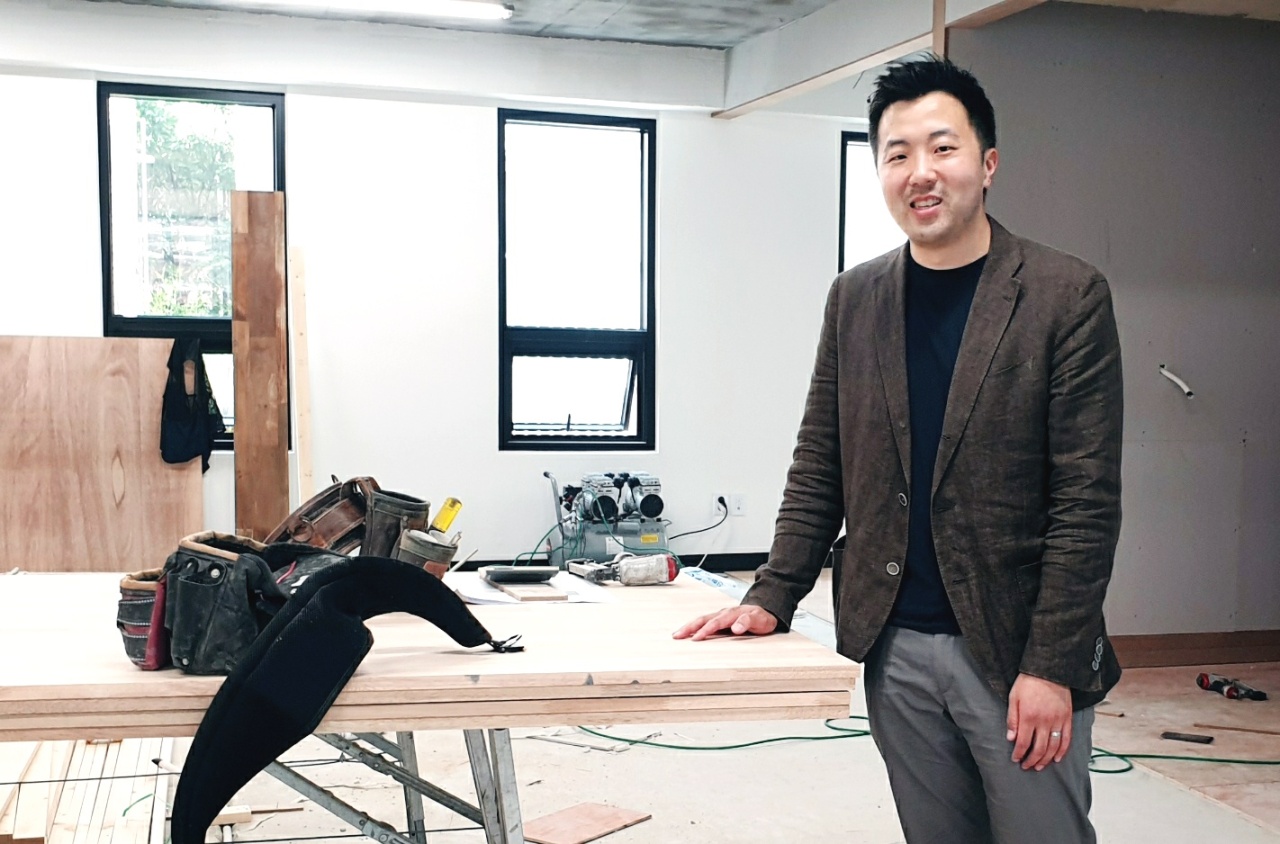 Matthew Shampine, CEO of DN Korea, poses for photo at an interview in Seoul on Tuesday. (Kim Young-won/The Korea Herald)

“People always need a place to live, and it is important for us (at the firm) to figure out how we can help streamline that experience all the way through their life cycle.”

The Dongnae platform allows customers to easily find the right place based on their needs and purpose, be it school and easy commute to work or investment, with assistance of the company’s partner brokers. It is also deploying cutting-edge technologies, including artificial intelligence and virtual reality, for the real estate agents to utilize.

The existing services available to customers for finding homes, like Zigbang, are mostly one-way, only offering property listings and data collected through the government’s agencies. Dongnae, however, serves as a platform that truly interacts with and offers tailored benefits for customers, he said.

“We are trying to offer full-stack services, all the way from consultation, touring, negotiation, and to the actual moving-in process,” he said.

Founded in March this year, the Seoul-based company is initially targeting newlyweds, for whom it is especially hard to buy a house since they may not have done it before. Finding a residential space for the locals will be the main business model for a while, but the company could later expand its territory in other segments, including the one for commercial property, he said.

Like WeWork, Dongnae focuses on building a valuable community for its participants -- in this case, local brokers, according to the DN Korea CEO. So Dongnae’s headquarters, which is scheduled to open in August, will serve as the community center for the company’s consultants rather than a typical real estate agency.

Aiming to contribute to the local neighborhoods, 1 percent of the company’s revenue from real estate transactions on the Dongnae platform will be donated back to the neighborhood where a local branch is located. The Dongnae consultants in that branch will be able to choose which charity they will support.

Although the company is in a fledgling stage, it has closed its pre-seed round of funding led by Boston-based venture capital firm Flybridge. It has also attracted investments from a number of Korean and US angel investors.

Despite his fresh start, his previous workplace, WeWork’s Korean unit is now struggling from valuation cut, departure of the CEO and downsizing.

Businesses of sharing economy are on a transitional process for now, he said, stressing that the company would eventually overcome the current difficulties. And personally, he doesn’t regret his time there.

“Though there were extreme ups and downs throughout those nine years, I’m grateful for that experience and where it has brought me,” he said.

“I was able to meet my wife, experience living in and doing business in Korea and China, travel and learn about so many cultures, and make countless friends all over the world.”

Shampine, also known as Cha Min-geun, is one of the founding members of WeWork Lab. Before returning to his home country from US, he was managing director of WeWork APAC in 2015, leading the company’s expansion in Asia. In 2017, he was appointed as general manager of WeWork Korea. He tied the knot with actress Claudia Kim late last year. The couple is expecting a baby later this year.