In support of eco-friendly lifestyles, Herald Corp., runs a year-round campaign through a group of young activists called Ecoya, which promotes environmental issues such as renewable energy, climate change and upcycling. The purpose of Ecoya is to remind the next generation of the importance of the environment and empower them to create positive change. Launched in March of this year, Ecoya currently focuses on online activities such as creating environment-related digital content. This article is part of those efforts. – Ed. 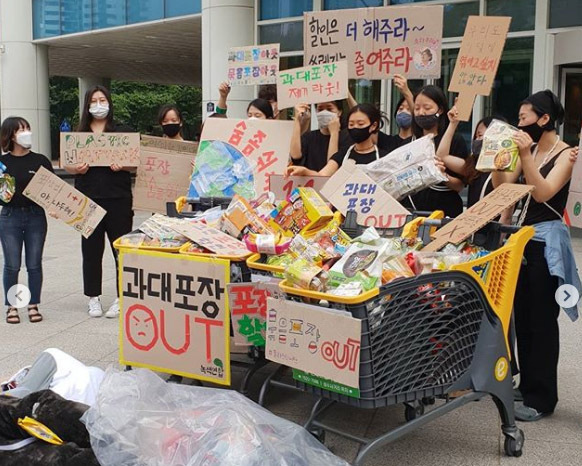 Consumers and activists participate in the `Plastic Attach` protest in front of a hyper market on July 3, which is the International Plastic Bag Free Day.
(Ko Kumsook)

Even without the COVID-19 pandemic forcing us to stay at home, the stellar growth of e-commerce has resulted in an ever-increasing number of package deliveries. Anticipating the arrival of packages has become a source of excitement for most of us, but for some, each package serves as a reminder of our environmental footprint.

“Every time I receive a package, I feel very uncomfortable,” said Ko Kum-sook, one of the three founders of the zero waste store, Almang Market.

Almang Market, which made its debut just three weeks ago, is the brainchild of three local activists, who met through a no plastic bag campaign at a traditional market in Seoul, which has been running for two years. Almang means kernels in Korean.

“We opened Almang Market, in the hope that it could serve as a community which allows people to easily access a zero waste lifestyle,” Ko added. 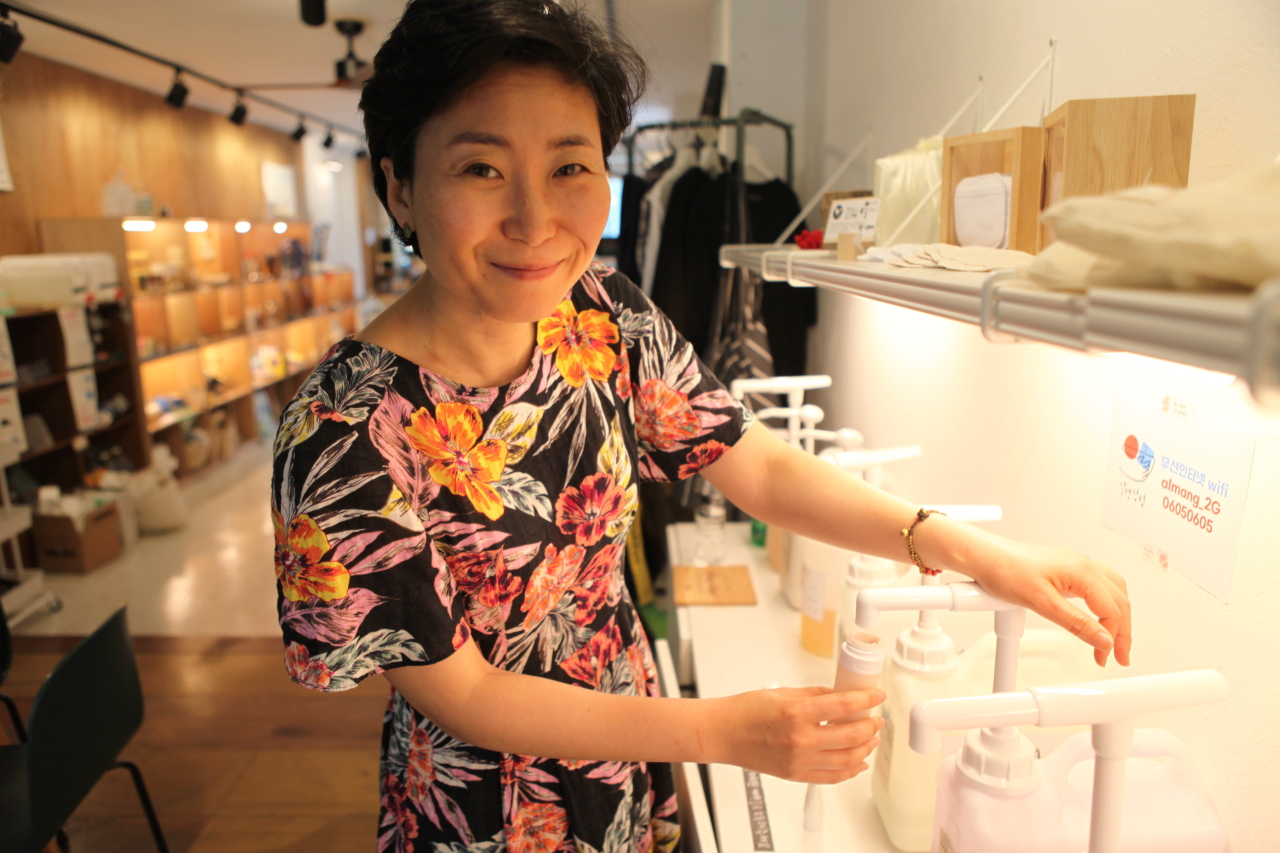 At Almang Market, people have to bring their own packaging to buy products such as olive oil, cosmetics, and coffee beans, which are dispensed at a “refill station.” Products sold at Almang Market are environmentally friendly through the use of recyclables such as used coffee grounds or left-over leather.

Ko, who has been an environmental activist for more than a decade, said that people are increasingly becoming aware of how they dispose of things, especially after the “waste crisis” in 2018.

In 2018, China’s ban of plastic and vinyl waste imports served as a wake-up call for many South Koreans who, despite proactively recycling, had no idea of the futility of recycling, given that their sorted waste was just dumped anyway. On top of that, the COVID-19 pandemic has made many people reflect on their relationship with the environment, Ko discussed.

A growing number of young Korean customers -- especially women in their 20s and 30s -- with an eye for environmentally friendly businesses have shown interest in zero-waste stores such as Almang Market and Cafe Earth, US.


Convenience at the expense of the Earth 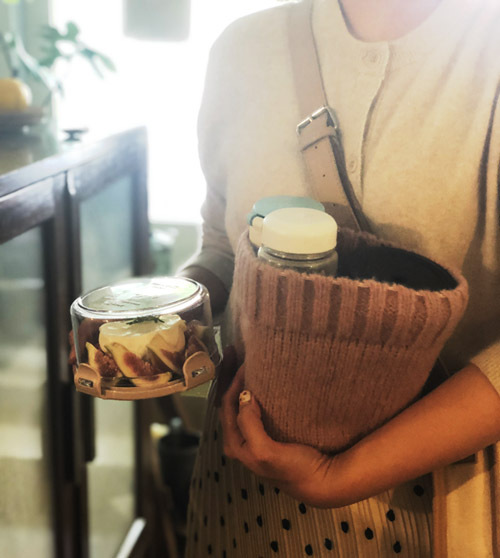 Instead of using disposables, Cafe Earth, US, uses reusable cups and hand towels. Behind the coffee bar, they use environmentally friendly detergents and operate under the principle of minimizing food waste. Customers have to bring reusable containers to buy takeout beverages.

“Some customers do complain, especially when they dropped by without knowing they need a container, but I feel proud when they say they were made more mindful by visiting our shop or are willing to take the trouble to bring containers and cumbersome packaging,” founder Gil Hyun-hee said.

Gil, however, does not advertise the cafe as plastic free. Customers only realize the principles underpinning the store when they are handed a handkerchief or asked to present reusable containers when asking for takeout.

“I don’t want to force any environmental messages on our customers. Rather, I hope they realize that avoiding disposable is not inconvenient,” Gil said, and urged people to use less environmentally harmful options.

“Although our lifestyles can harm the Earth, this zero waste lifestyle doesn’t need to come at any personal expense,” said Gil. “My respect for the Earth does not hurt me and allows me to continue prioritizing my own wellbeing.”

Gil said that people could start with small efforts, such as using bamboo toothbrushes, handkerchiefs instead of paper towels, or their own shopping bags and tumblers.

Granted, Almang Market and Cafe Earth, US only represent a tiny fraction of an industry that consumes disposables every single day: Cafe Earth, US is among a few zero waste stores out of 70,000 cafes in the country.

Despite this, both Gil and Ko have high hopes, thanks to toughening regulations in addition to improving consumer awareness.

They hope that cafes and restaurants may become less environmentally damaging when the use of paper cups and straws is banned and customers have to pay for takeout cups, starting from 2021.

“Since we cannot always rely on everyone taking responsibility, we need a well-organized system and regulations,” Ko said. “I think South Korea’s legal infrastructure is well designed and developing fast but lacks detail.”

Ko said she expects more fundamental and positive changes to come as the country pushes forward with the green economy under its “Green New Deal” initiatives. Annoucned by the Moon Jae-in administration in June, the Green New Deal aims to invest 12.9 trillion won (US$10.8 billion) to boost the green energy sector and create 133,000 jobs in the process over the next two years.

“Combined with fast-changing consumer trends among the younger generation, I hope the Green New Deal could bring about fundamental change in our economic system, and prove that a green lifestyle doesn’t need to hurt the economy,” Ko said.