Regarding the merger deal involving the air carrier, HDC had to receive approval from six of the nations that Asiana flies to as a prerequisite.

HDC had planned to complete the deal by the end of April after regulators in the United States, China, Kazakhstan, Uzbekistan, Turkey and South Korea approved the merger deal. 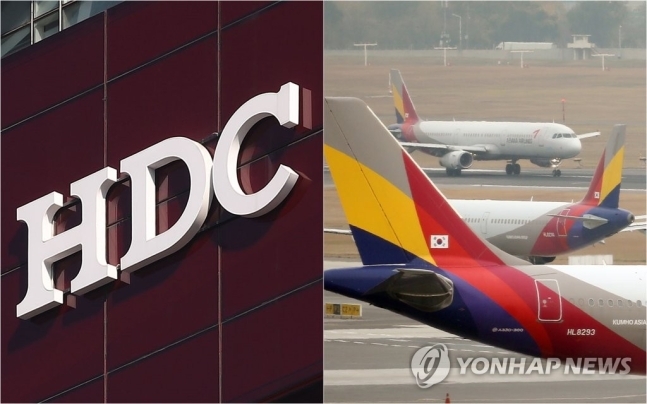 But the closing date for the deal was postponed to “a date agreed by both parties” following a delay in Russia’s approval. The contract expiration date was June 27.

HDC said Friday that the Russian authorities notified HDC of approval for the takeover on Thursday at 11 p.m.

With the final block to the planned acquisition of Asiana cleared, HDC said it has requested Asiana’s creditors review the acquisition status since negative situations have been impacting the takeover deal.

“Although the process for corporate merger approval has been cleared, other prerequisites for a takeover deal such as sincere attitudes from Kumho Industrial and Asiana Airlines must be reached for deal closing,” said HDC in a statement released to reporters Friday.

Last month, HDC said it hopes to renegotiate its deal for acquiring Asiana given the business turmoil caused by the COVID-19 pandemic.

The company said it has not received “sufficient and trustworthy data” about Asiana’s financial status or an explanation for the changes to that status since the contract was signed.

In December, an HDC-Mirae Asset consortium inked a deal with Kumho Industrial to acquire its controlling 31 percent stake in the country’s second-largest air carrier under a plan to diversify its business portfolio.

But since the outbreak of the novel coronavirus in January, Asiana has scaled back services on 79 percent of its lucrative China routes and suspended most of its international routes.

This undermined the air carrier’s fiscal health, raising concerns that HDC might back away from its plan to acquire the company for 2.2 trillion won ($1.83 billion).