South Korean drug developer SK Biopharmaceuticals is likely to get an early admission to join the Kospi 200 -- a basket of top 200 blue-chip stocks of the nation’s benchmark index Kospi -- possibly only two months after its planned market debut in July, according to local analysts on June 22.

If a newly listed stock’s market cap reaches the top 50 in the market, the firm’s stock is qualified to join the league of 200 blue-chip stocks even before the bourse operator announces regular changes of the list every six months.

Acceptance to the Kospi 200 requires SK Biopharm to reach a market capitalization of at least 4.2 trillion won ($3.46 billion), equaling a price of 54,067 won per share, Kim Dong-wan, an analyst at Eugene Investment & Securities. 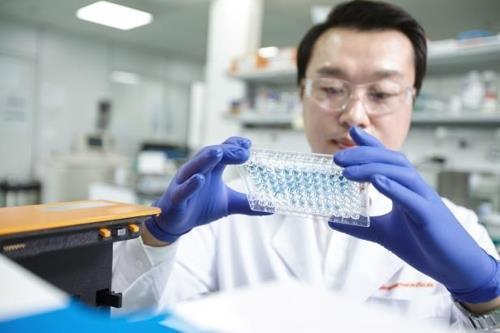 Its entry is anticipated on Sept. 11, Kim said, adding that it was a day after expiration date of Kospi 200 futures and options.

Previously, other large-cap stocks such as Samsung C&T, Samsung Biologics and Netmarble joined the list within six months of going public, according to Kang Song-chul, an analyst with Shinhan Investment.

Ahead of its market debut on July 2, SK Biopharm set its initial public offering price at 49,000 won per share on Friday, after 1,076 domestic and foreign institutional investors participated in the book building and bid for 11.75 million shares, or 60 percent of the total.

The subscription rate stood at 835.66:1, recording the highest competition rate among local companies with public offering value worth more than 500 billion won. Retail subscriptions will take place on Tuesday and Wednesday.