Toss Lab, the maker of innovative collaboration tool JANDI, has established itself at the top of South Korea’s growing work communication platform market.

The fledgling company, in just six years, has managed to go head-on with not only domestic competitors such as Flow and Collabee but also global companies like Slack and Microsoft Teams.

Ironically, however, these direct competitors offer far less of a challenge than that of the immensely popular messenger service KakaoTalk, in JANDI’s journey to become a leading SaaS (Software as a Service) company, said Toss Lab founder and CEO Kim Dae-hyun.

“It’s not like people don’t have access to collaboration tools, rather they just use their personal messenger services like KakaoTalk instead,” Kim affirmed. “To be honest, justifying the efficiency and effectiveness of work collaboration tools like JANDI was the most significant initial challenge,” Kim added.

Kim quickly realized that there were two primary ways to introduce JANDI to potential clients, either by having companies use the service themselves or by providing many use cases. This would allow companies to recognize the service’s applicability and trustworthiness, which is an important hurdle especially for a new and unfamiliar product in the market. Kim focused on building use cases in his strategy to build JANDI’s presence.

Kim got his feet wet at a conglomerate and then went on to work with TMON during the e-commerce boom. When a light bulb went off in his head while noticing the lack of innovation in workplace collaboration he decided to launch Toss Lab in 2014.

“I saw many take the leap and start their own businesses in the food, fashion and housing industries but I always wondered at the lack of movement in workplace innovation. Especially considering how much time we spend working,” Kim added.

Despite initial challenges, Toss Lab continues to grow fast, doubling its user base year on year. This success is in part due to Kim’s spot-on predictions regarding the growth of the SaaS market and, accordingly, the increasing popularity of the work collaboration tools within it. Indeed, ResearchAndMarkets.com predicts that the global SaaS market will grow from $134.44 billion in 2018 to $220.21 billion by 2022, at a compounded annual growth rate of 13.1 percent.

Shifting trends in workplace culture have also contributed to the growing popularity of JANDI-like tools. Led by big companies like Samsung and CJ which tend to set trends regarding the domestic workplace culture, an increasing number of companies, especially those with more than 1000 employees, are embracing collaboration tools, Kim said.

This year’s Covid19 pandemic has presented such tools with a unique market incubator by necessitating digital communication tools. Perhaps as a side effect of this global crisis, the company has witnessed exponential growth. Virus-induced social distancing has pushed companies to improve the efficiency of working remotely in order to offset any downsides of this new normal.

In March, Toss Lab reported an 80 percent rise in new registrations, and the company hit the 2-million-user milestone in mid-April. 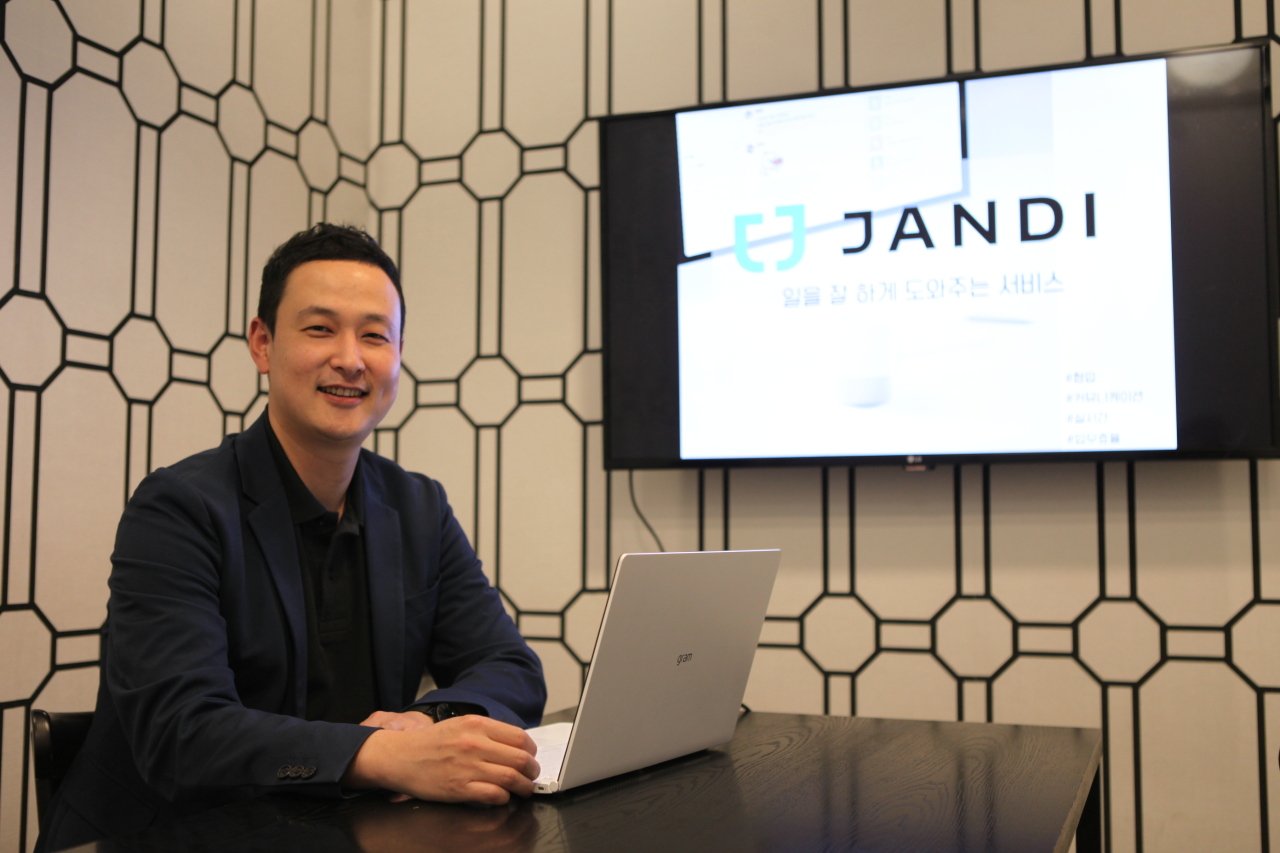 “How much of this demand will endure once this has all blown over and we have returned to our workplaces, is yet to be seen. The most pressing question at the moment is how we can translate these new registrations into profits,” Kim remarked, given that his company is providing much of its services free of charge until June, to allow new users to take advantage of this platform during the pandemic.

Although it’s difficult to make predictions about the world post-coronavirus, Kim said he hopes this time of change will allow people to recognize the necessity of separating work collaboration tools from personal messenger services. Regardless of what the future holds, Kim is determined to use JANDI’s emergent popularity as a platform for future success not only in the domestic market but also overseas.

At the time of publication, Toss Lab, which will conclude its series B funding as early as June, has raised 13 billion won ($10.56 million) from investors including SoftBank Ventures, Qualcomm Ventures and Korea Development Bank.

Once this ongoing round of funding has been completed, the company will push the global expansion of JANDI, which currently gathers 12 percent of its revenue from markets such as Japan, Vietnam and Taiwan. The company will make further forays into overseas markets including Singapore, United Arab Emirates and Malaysia later this year.

“In Korea, our strategy is complete localization. In my opinion, our dominant market position has arisen from our thorough understanding of the reality of Korean corporate culture, which allows us to respond to customers in real time,” Kim said. “We will deploy the same strategy when we expand abroad. We aim to create services that are tailored to serve local companies’ needs.”