In January, Airbnb superhost Diana Jeong quit her job as she was expecting a baby this spring. What she did not expect was a pandemic that would upend her plan to become a full-time Airbnb host.

The former college lecturer made that decision because she found great satisfaction in providing hospitality to guests, but more importantly she could make a living renting her three-bedroom apartment on the global house-sharing platform.

She now finds herself selling used items on the secondhand market and writing petitions to Airbnb and authorities.

Jeong, who has been on the platform for five years since she was in the UK, claims Airbnb is being unfair to hosts with its new policies, which have been updated as the epidemic becomes a pandemic.

“The changes of Airbnb policies regarding COVID-19 has been a disaster,” Jeong told The Investor on March 19. 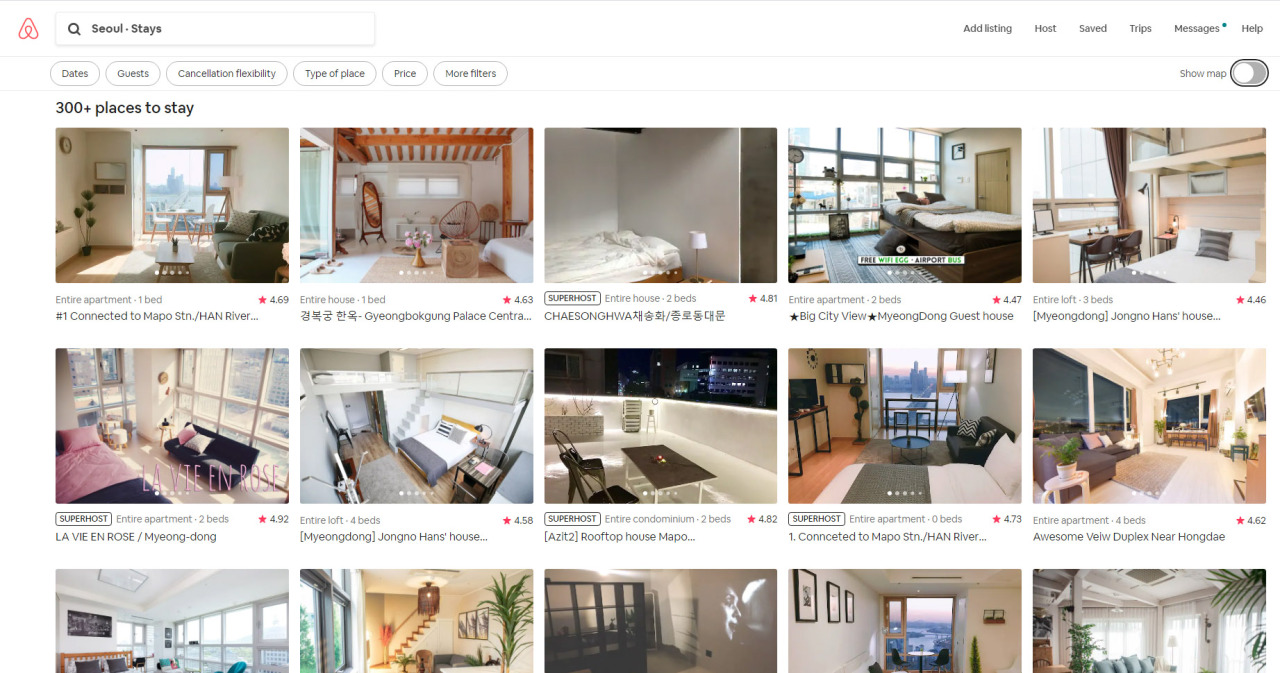 Jeong is not alone. Cho Hyun, who runs two properties on the platform, also said that he is devastated by Airbnb’s new policies, which have resulted in the changes that were retroactively applied to closed reservations or bookings that have nothing to do with the outbreak, pointing out Airbnb carried out refunds without the host’s consent.

“It’s not like we demand the same policy apply to the reservations in these hard times, but hosts shouldn’t be the only ones who bear the burden,” Cho said. “They didn’t even have the courtesy to ask our permission.”

Some hosts reported abuse of the system by guests, such as getting refunds citing COVID-19 after they checked in and stayed just to find a cheaper place. They said Airbnb gave full refunds to those cases without verification that the cancellations were linked to the virus. A host whose surname is Kim said she was considering legal action jointly with other hosts who have had similar experiences.

Airbnb, introduced policy updates regarding COVID-19 a few times, says they feel the pain of both hosts and guests.

“This is a very difficult time for both guests and hosts. As global entry bans expand along with the spread of COVID-19, we had to take action to protect both guests and hosts,” Airbnb Korea spokesperson Eum Sung-won told the Investor. “But we understand the ordeals that hosts are going through and are mulling various ways to support our hosts.”

Eum said in the case of abuse of the changes, the best policy is to rely on everyone’s honesty and to trust guests because, “Our first priority now is the health of the public and our guests and hosts.”

While many hosts accept that the hardship that entails extenuating circumstances, it is likely that some of them will be pushed out of businesses if the worldwide travel restrictions continue even for a couple of months. Recently, an online community for domestic Airbnb hosts is seeing an increasing number of listings that have been put up for sale by Airbnb hosts. Cho, who still has to pay monthly rents and interest, has also put up one of his listings to hand over to someone else but to no avail so far.

Cho and Jeong are among most vulnerable because their listings, like many other domestic listings, are not entirely legal.

South Korea has not fully embraced the shared economy and is a place where many globally successful “shared economy” businesses such as Uber have failed. And as it relies on existing laws to govern new types of business, it often creates complicated situations for hosts and guests.

For Jeong to rent out her apartment on Airbnb or other home-sharing platforms, she has to live in her property when accepting guests. For apartments that, like hers, are in urban areas, guests also have to be foreign nationals. Jeong said many guests want the entire property to themselves, and in this time of global travel restrictions, hosts have been forced by economic necessity to accept domestic guests, which is illegal.

The number of hosts has grown in recent years along with the number of guests who use Airbnb. In 2018, a total of 2.9 million tourists used Airbnb, up 56 percent from a year earlier. Airbnb hosts earned an average of 4.94 million won (US$4,400) last year, according to the company.

But the country has failed to recognize hosting as a legitimate business model. And this leaves many Airbnb hosts unprotected under this kind of unprecedented situation, said a businessman in the hospitality business. 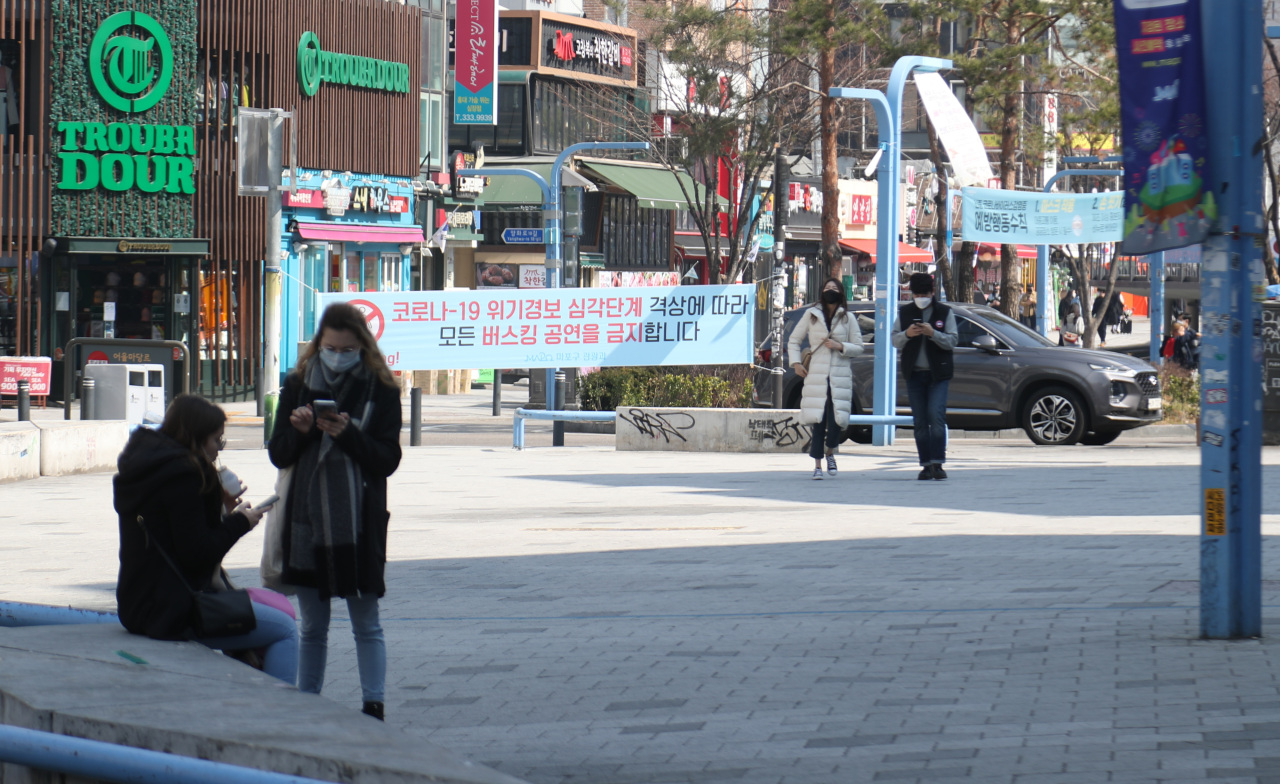 This photo taken on March 8 shows an empty street near Hongik University amid Covid-19. The street is a famous destination for tourists and young people. (Yonhap)

Zhang Ki-chul, an Airbnb host with five years of experience, said that he predicts many Airbnb hosts and guest houses will go out of business and be left without government aid, even though they have been greatly affected by the coronavirus.

“I saw many Airbnb and guesthouse closures in 2017 when China banned travel to Korea over the deployment of the US THAAD (missile system), but this time it would definitely take a heavier toll on hosts,” Zhang said.

“If they shut down, no one will care because many of them were operating illegally but that’s not fair and as the home-sharing business is growing and evolving to meet users’ tastes, the government should fully embrace new businesses like home-sharing platforms.”