South Korean stocks rebounded sharply Tuesday as investors were buoyed by the US Federal Reserve’s overnight announcement of unlimited bond-buying to tackle the economic slowdown due to coronavirus spread. The Korean won also climbed sharply against the US dollar.

Institutional investors scooped 100 billion won ($40.2 million) won worth of stocks. Foreigners, who turned to net buyers until early afternoon, turned back to net sellers and dumped 82.9 billion worth of their shares. 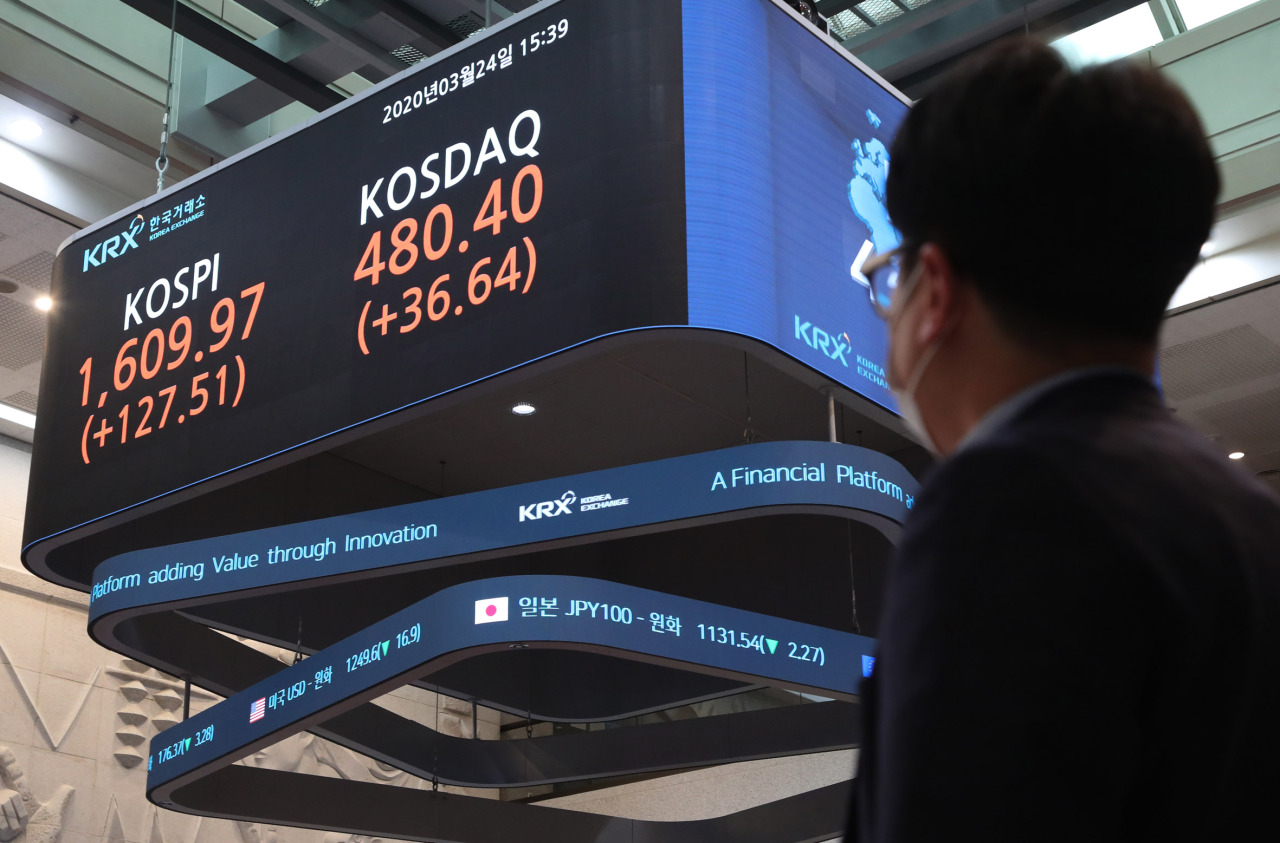 A man looks at a electronic board that shows Kospi and Kosdaq indexes on March 24 at Korea Exchange. (KRX)

The Korea Exchange temporarily suspended trading at 10:05 a.m. for five minutes, following a sharp rise in Kospi 200 index futures -- as prices jumped 5.29 percent. Prior to the trading halt, the nation’s sole market operator activated another trading halt on the tech-heavy Kosdaq at 10:02 a.m., as the Kosdaq 150 futures rose 6.15 percent from the previous session’s close.

Kosdaq also closed higher at 480.40 -- up 36.64 points, or 8.26 percent. The index got off to a solid start at 457.21 and quickly extended its gains #throughout the day.# Foreign and institutional investors net purchased 102.9 billion won and 82.5 billion won of stocks, respectively, pulling up the bourse.

The Fed pledged an aggressive quantitative easing program Monday (local time) noting that it will buy an unlimited amount of Treasurys and mortgage-backed securities to soothe financial markets.

Despite the Fed’s big move, major stock market indexes on Wall Street tumbled. The Dow Jones Industrial Average dropped 3.04 percent to close at 18,591.93 points after the Senate again failed to advance a nearly $2 trillion COVID-19 stimulus package as Republicans and Democrats failed to reach an agreement. The S&P and Nasdaq also fell 2.93 percent and 0.27 percent, respectively, on the same day.

However, most large-cap stocks in Seoul market rose across the board.

“The Fed’s announcement on unlimited easing increased the chance to mitigate risks of the won-dollar exchange rate and credits. It also positively affected the local stock market,” said Seo Sang-young, an analyst at Kiwoom Securities.