SUWON -- Around 400 Samsung Electronics shareholders gathered at a convention center in Suwon, Gyeonggi Province, to attend the annual meeting with reinforced sanitation efforts amid the coronavirus fears.

“I hesitated to participate today because of the coronavirus spread, but had to come to exercise my rights as a shareholder,” said one of the attendees.

Amid persisting concerns about the novel coronavirus spread in Korea, the shareholders present at Suwon Convention Center wore masks as a precaution.

As widely expected, due to the COVID-19 scare and introduction of the electronic voting system, the number of attendees more than halved from last year.

Samsung strategically decided to change the meeting venue from its Seocho headquarters, in southwestern Seoul, to the 2,000-seat convention center in Suwon, outside its own corporate building for the first time, in order not to repeat last year’s overcrowded meeting that drew over 1,000 shareholders after the company’s 50:1 stock split in 2018. 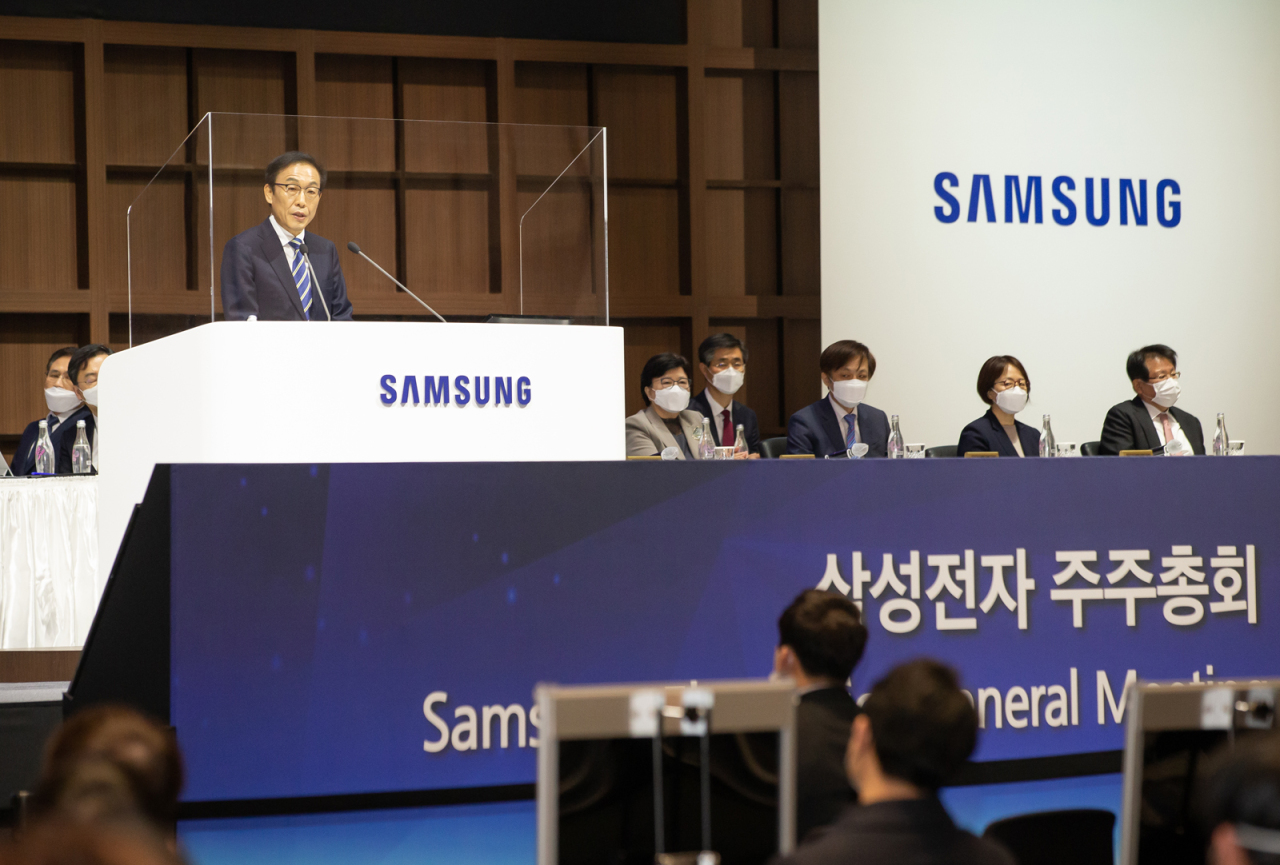 In order to prevent close contact, the organizer made shareholders sit about three seats away from each other.

Vice Chairman Kim Ki-nam presided over the meeting for the second time, acknowledging that the tech giant is facing a number of risks in the global business environment, including the global epidemic, continuing trade disputes between China and the United States, slowdown in emerging markets and overall anemic growth.

“Despite the recent harsh conditions, Samsung has been thoroughly preparing for the future, while solidifying its global leadership in the semiconductor, mobile and consumer electronics markets,” Kim said.

“The company, particularly, has made efforts to reinforce its responsibilities for management and enhance the rights of shareholders by having the first ever chair to represent outside directors and formed an external committee on compliance monitoring,” he highlighted.

About Samsung’s most lucrative chip business, Kim said global demand for semiconductors will grow despite the “external uncertainties” this year.

“We expect global chip demand to grow driven by the growth of artificial intelligence and automotive semiconductor industries, increased investment from data center firms and expansion of 5G networks,” he said.

“We forecast the memory chip market would stabilize this year compared to the previous year as investments centered on upgrading our process nodes are in progress.”

Some shareholders raised concerns over possible difficulties in production of Samsung products ranging from mobile phones and TVs to consumer electronics, amid the global COVID-19 pandemic.

“There were some difficulties in parts procurement when the virus first broke out in China, but we have solved the problems and there is no production issue now,” said Kim Hyun-suk, chief executive officer of consumer electronics at Samsung.

Regarding the looming slowdown in demand for consumer electronics in the United States and Europe, Kim vowed to take precautionary measures to minimize the virus influence on Samsung’s global distribution network and consumers worldwide.