While all industry sectors in South Korea are struggling to handle the economic impact of COVID-19, the nation’s 5.48 million self-employed and small business owners are among those suffering the most.

Oh Myong-seok, who has been running a 24-hour diner in Yongsan, Seoul, for seven years, is experiencing its worst-ever slump, as the store is seeing its customers cut in half.

“For night times from 9 p.m. to 9 a.m., revenue has been halved, for day times it has been cut about 40 percent,” Oh told The Korea Herald on Tuesday at his 60-seat restaurant.

“There was always a line during the peak hours in lunch and dinner time, but it is basically empty nowadays. People avoid the crowded time and come in dispersed.” 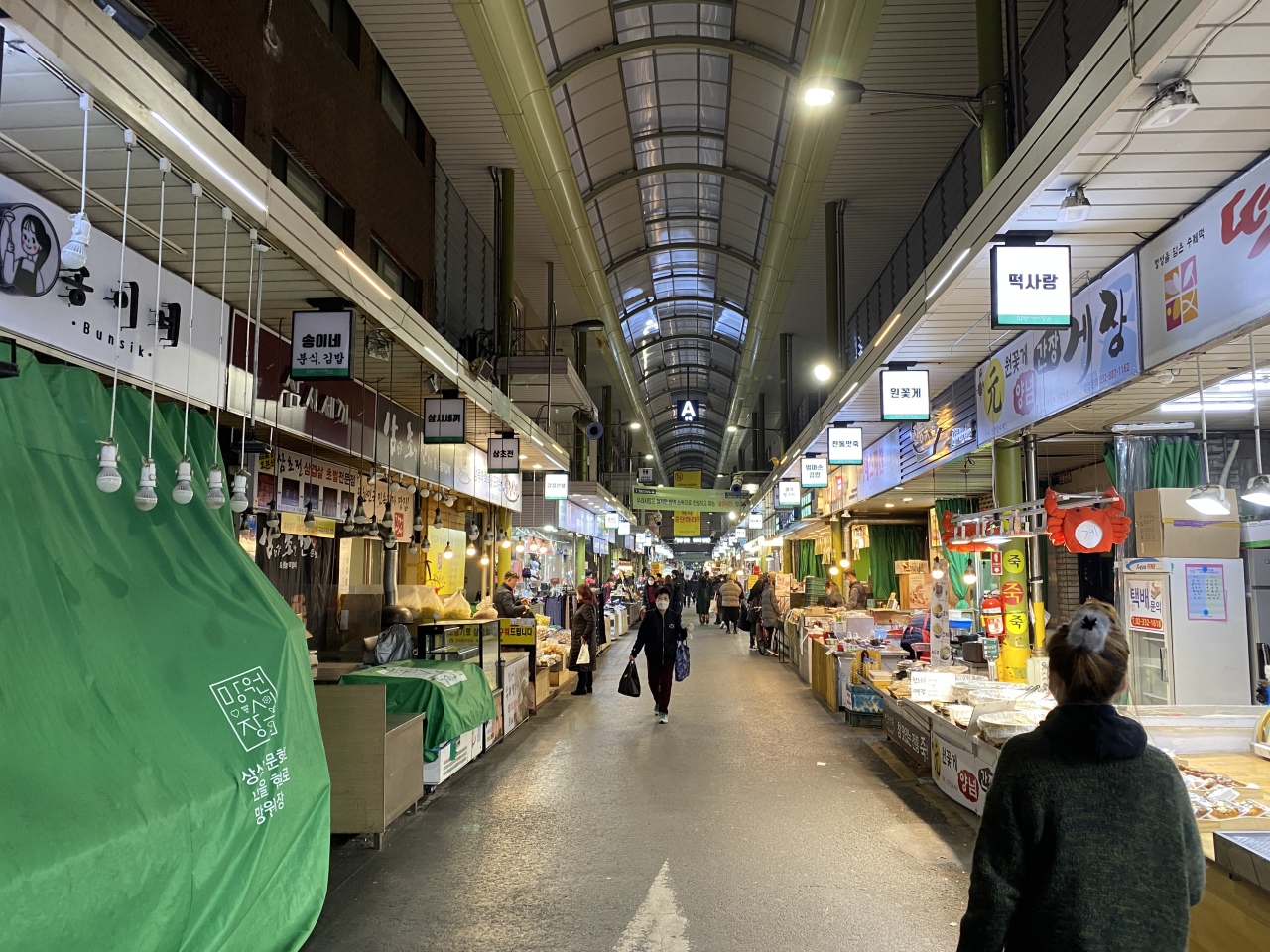 Oh still says he is better off than other shop owners he knows.

According to a poll conducted by Ministry of Agriculture, Food and Rural Affairs and Korea Foodservice Industry Research Institute, about 95.2 percent of diners and franchises are experiencing about a 65.8 percent decrease in the number of daily customers.

This is not limited to the food industry. Most small business owners and the self-employed are enduring a drastic change in consumer due to the virus outbreak.

In collaboration with KT, Korea Federation of Micro Enterprise analyzed 6 million sets of data to reveal that the volume of population flow across the country has been decreased by around 70 to 80 percent. The figure links closely to the reduced profit of shopkeepers, the federation explained.

“For me, the real problem is the fixed expenses for managing the store. Personnel costs and ingredients are something you can control, but the rent is not,” Oh said. Previously, the rent accounted for around 10 percent of a monthly income for Oh, but now, it takes up about 40 percent.

“On the news, they say there are ‘kind’ building owners cutting the rent for people like us. But I do not see anyone doing that for me, nor for people around me,” a fruit vendor owner surnamed Jeon told The Korea Herald.

Jeon’s store, in Mangwon Traditional Market in western Seoul, was shut down a couple of times already, when confirmed COVID-19 patients were found to have visited.

Late on Tuesday night, the National Assembly approved an 11.7 trillion-won ($9.44 billion) extra budget bill proposed by the government for efforts to contain COVID-19 and to stem the economic fallout from the crisis.

The supplementary budget includes 1.72 trillion won for emergency loans, with interest rate set at around 1.5 percent. In addition, the extra fund is expected to provide compensation for losses caused by the epidemic to 198,000 stores across the country.

Lawmakers also passed the amendment bill to the Restriction of Special Taxation Act to lower value added tax for the self-employed, expanding the qualification bracket for simplified taxpayers from annual revenue of 66 million won to 88 million won. 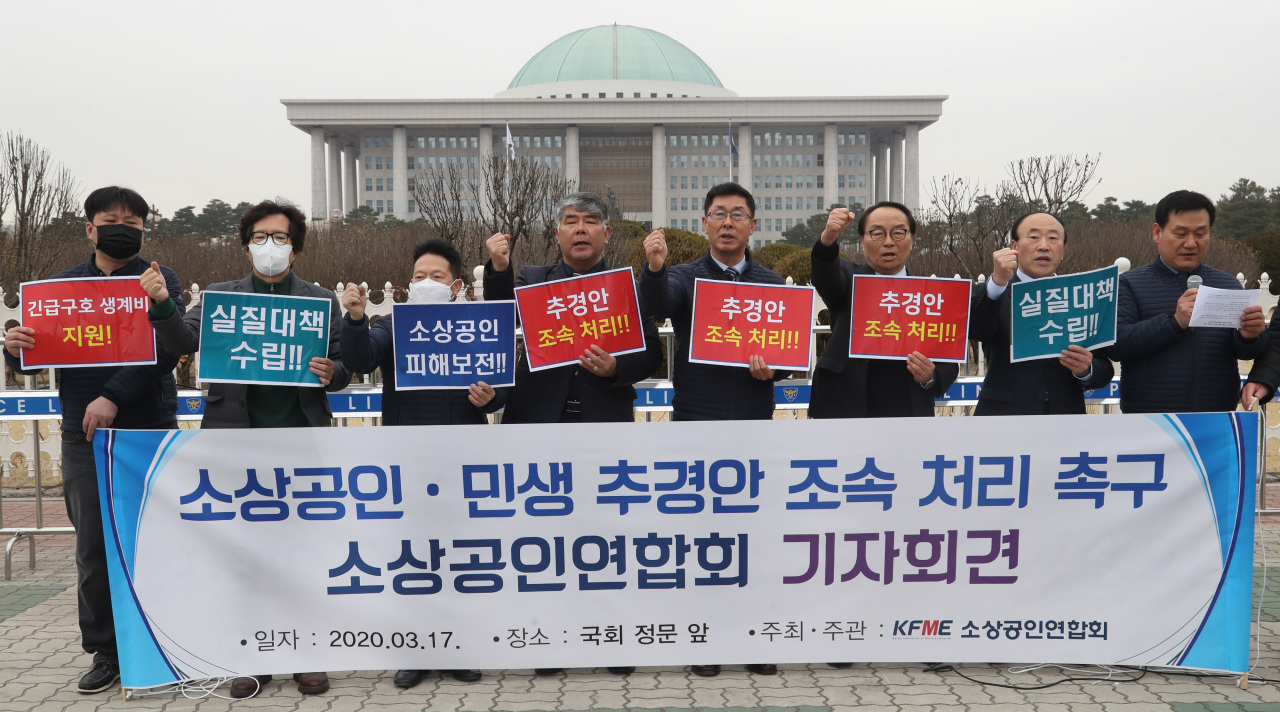 Members of Korea Federation of Micro Enterprise hold signs demanding for government’s financial support for small business owners, in front of the National Assembly in Seoul on Tuesday. (Yonhap)

For some small business owners, getting more loans comes as a greater burden.

“I did think about getting the bank loan, but I already have debt and I am not even sure if I would be eligible,” Choi Jung-hee, who operates a hair salon in Mapo, Seoul said. “I don’t know how much longer I will be able to endure.”

Earlier on Tuesday, KFSE held a press conference in front of the National Assembly to call for government to expand the supplementary budget to 30 trillion won.

“We call for all possible measures to be taken for the survival of small businesses and revival of local economy,” Kim Im-yong, the de facto president of the federation said.

Noting that it is an unprecedentedly difficult situation, the group demanded the government to provide financial support, including emergency living expenses, personnel costs, and disinfection supplies, in addition to tax cuts.

Experts say it is crucial to prop up small business owners, who account for about 21 percent of the working population in 2018, as it is the base of the country’s domestic market.

“In using extra budget, the government should know what kind of support the self-employed really needs, and disburse the fund more effectively,” Cho Joon-mo, an economics professor at Sungkyunkwan University told The Korea Herald.

“The problem now is a corporate liquidity shortage. To not waste the budget, it is important for it to go specifically to where it is needed, to help the small businesses hold out.”