Local brokerages and banks in Yeouido, the country’s main investment and financial district, have allowed employees to work from home as part of efforts to contain the new coronavirus. Over 73 percent of the nation’s financial companies are reviewing telecommuting plans, according to a poll conducted by job portal Saramin.

“Except IT and other core departments, many employees are working from home through the company’s intranet,” said a 35-year-old office worker at a securities brokerage firm in Yeouido.

“Because of security concerns, we use corporate messenger instead of KakaoTalk when sending documents or having video conferences.”

Since several cases of the coronavirus were confirmed in Yeouido last month, major stock firms and banks have started to deploy workers to separate offices, ranging from corporate training centers in other cities to another headquarters building in a bid to prevent further spread, according to industry officials.

“Unlike those days during the MERS outbreak, the bank opens thirty minutes late and the head office announced if the situation is getting worse, employees at bank branches can work at different locations at a manager’s discretion,” said a bank clerk working in Majang-dong, Seoul, referring to previous experience with the Middle East respiratory syndrome in 2015.

Initial public offerings led by brokerage houses also have been battered by the coronavirus pandemic, with IPO presentations delayed or canceled.

“We canceled the planned offline conference and held an investor relations presentation online,” said an official from LS EV Korea, a supplier of electric car components. Since there is no Q&A session in the online investor relations sessions, officials are having 1:1 consultations with investors in a quiet place, he said.

Some companies that planned to be listed on the Kosdaq bourse had even withdrawn their registration statement for an IPO on fears of being undervalued.

The spread of new virus also put a brake on analysts’ plans to visit firms and meet with investor relations officials which are important when writing research reports on whether to invest in specific companies or industry sectors.

“It is even hard to have lunch or dinner with company officials these days.” 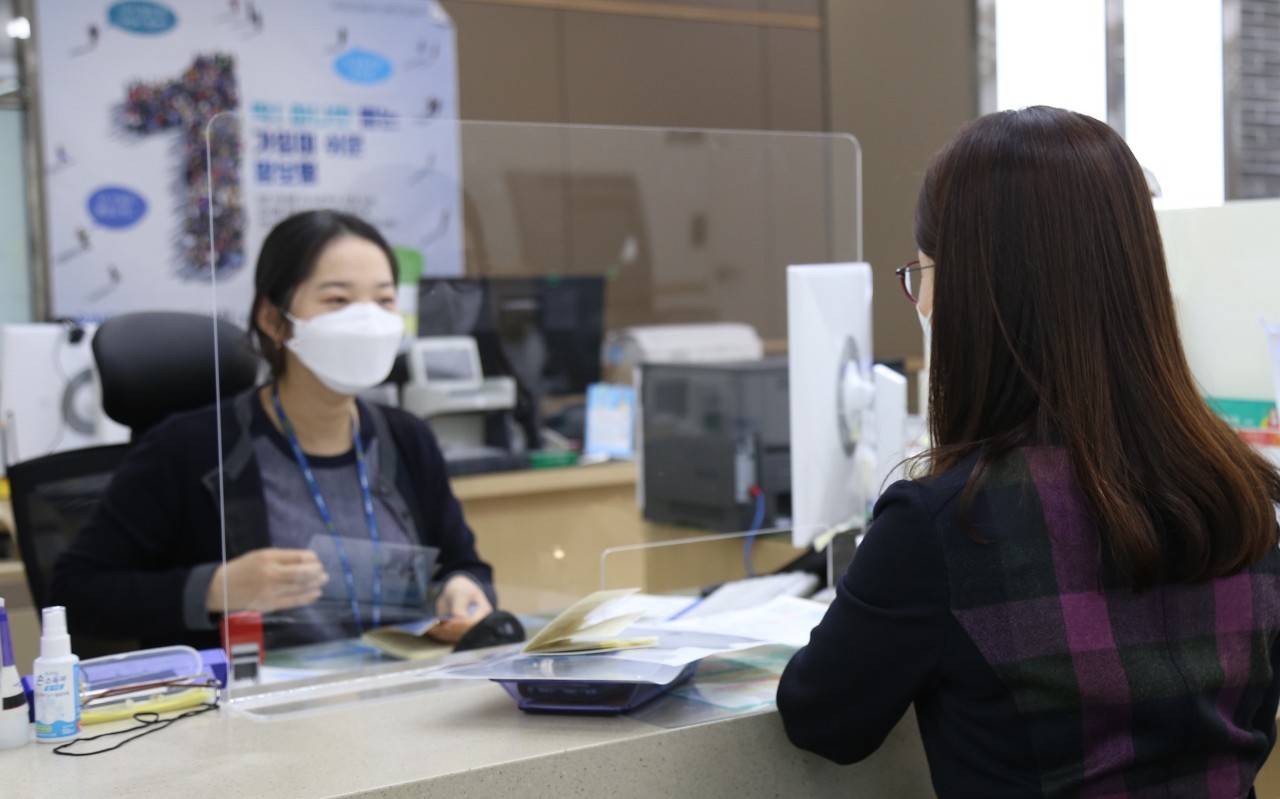 A bank teller and a customer talk over a tranparent wall. (Yonhap)

Visits to brick-and-mortar banks have always been part of Koreans’ daily routines, despite the fast rise of digital transactions.

But commercial lenders have seen fewer than half the visitors they used to before the outbreak of the novel coronavirus in late January.

Before offline branches became potential breeding grounds for the virus, a popular branch of a major commercial bank used to get hundreds of customers per day.

Banks have shut down branches for three or four days upon learning that coronavirus patients have been there. Employees at those branches have been ordered into self-isolation for two weeks.

Customers now have to undergo thermal monitoring before they enter a bank and are greeted by bank employees wearing face masks. Bottles of hand sanitizer are installed near the entrance to every branch.

To protect their core networks, which would paralyze all operations if affected, banks have been dispatching their employees to different branches. Temporary offices have been launched to carry out key business at headquarters and IT centers.

They have also eased firewalls to allow employees to work at home if necessary -- a rare move in the financial sector.

The watchdog Financial Supervisory Service on Thursday expressed concerns about a decline in the lenders’ loan margins due to the outbreak.