In 2012, Psy’s “Gangnam Style” made the world do the horse dance and proved that South Korean cultural content could go beyond East Asia and even spread to other continents. Fast forward to 2019, and the country with a population of 51 million is a cultural powerhouse -- with its artists and cultural content not only stealing the hearts of global audiences but winning international acclaim. The proof? Here are three Bs that hail from Korea. 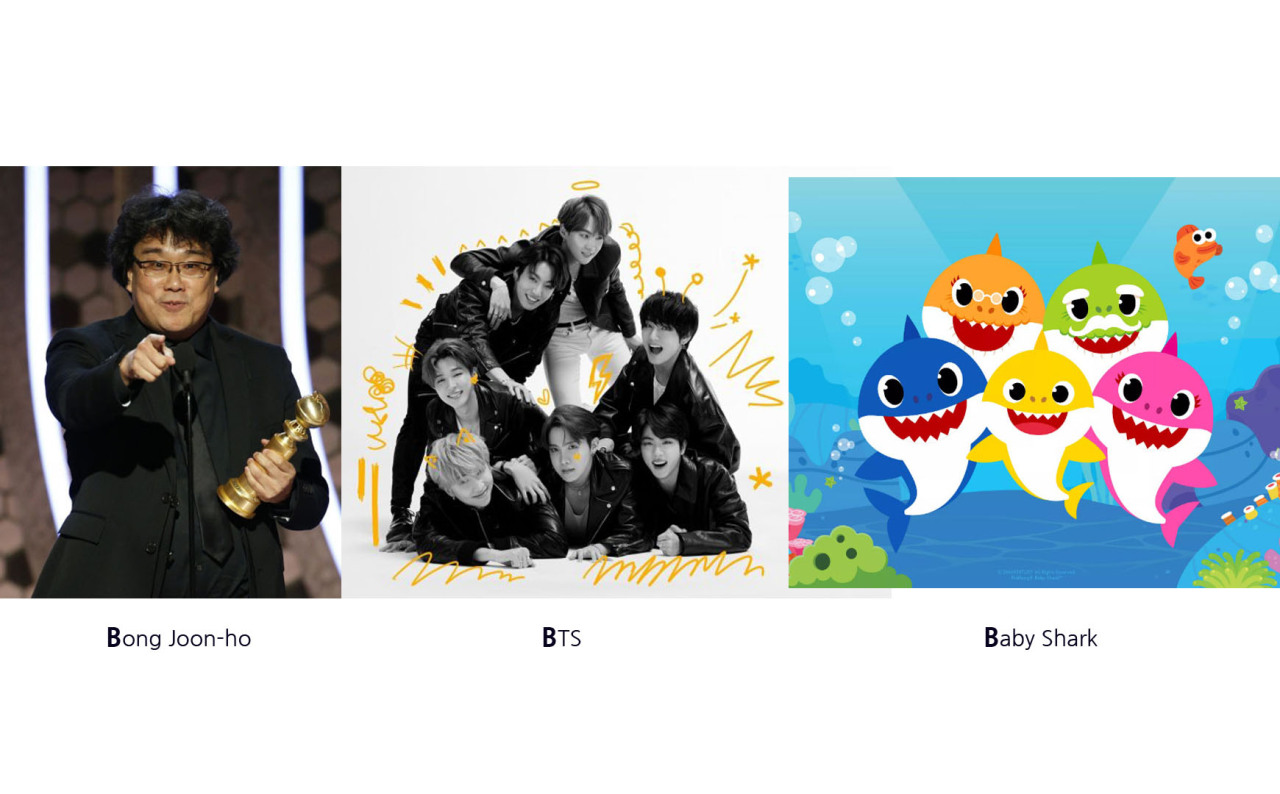 Bong Joon-ho
Bong Joon-ho and his movie “Parasite” swept the Academy Awards and snagged four Oscars, including the trophies for best film and best director. This victory followed a long list of honors, including a Golden Globe and the Palme d’Or at the Cannes Film Festival. “Parasite” is the first foreign-language film to win an Oscar for best picture in the 92 year-history of the Academy Awards.
The production costs of the movie are estimated at somewhere between 13.5 billion ($11.3 million) won and 20 billion won.
As of Feb. 17, Bong’s movie had raked in $179 million from box offices in 205 countries, according to Box Office Mojo.


BTS
The seven-member boy band BTS is making K-pop history. The band has a huge fan base around the world called the BTS Army and has topped music charts in many countries including the US, the UK and Australia. This year it became the first Korean act to perform at the Grammy Awards and set a record by staying at the top of the Billboard Social 50 chart for 165 consecutive weeks.
Big Hit Entertainment said it generated record revenue of 587.9 billion won and 97.5 billion won in operating profit in 2019, double what it brought in the previous year.
But the success of BTS has had an even stronger impact on the economy: The Hyundai Economic Research Institute said in 2018 that the BTS phenomenon was worth some 5.5 trillion won a year. For instance, according to Bang Si-hyuk, Big Hit Entertainment’s founder and CEO, BTS’ three-day concerts in Seoul brought 187,000 visitors to Korea, generating 100 billion won in economic value.


‘Baby Shark’
Who knew “Baby Shark,” a Korean children’s song, would grab the attention of so many children and their parents?
First uploaded on YouTube in November 2015, “Baby Shark” went on to get 4.58 billion views. As of Feb. 17, it was YouTube’s third-most-viewed video -- not too far behind Ed Sheeran’s “Shape of You.” The catchy song from Pinkfong, an education brand within Korean media startup SmartStudy, has been translated into 19 languages and is a favorite of many parents who use the song to soothe their children.
Its success isn’t limited to YouTube either. The song took over Nationals Park, the home of the Washington Nationals, last year throughout the Major League Baseball season. At the World Series, it became the team’s battle cry. In 2019, the song ranked 75th on the Billboard Year-End Hot 100 chart.
Backed by “Baby Shark,” the company’s sales soared from 40 billion won in 2018 to 60 billion won in 2019. In 2014, the company posted sales of 7.6 billion won.
“Baby Shark” has also made a fortune for the family behind SmartStudy. Kim Min-seok, who co-founded the company in 2010, owns 23 percent of the startup, and Samsung Publishing owns another 21 percent. Kim’s family owns 63 percent of the company, according to Bloomberg.


What’s their formula for success? Maybe we should look at their own words for a clue.
“When I was young and studying cinema there was saying that I carved deep into my heart, which is ‘the most personal, is the most creative.’ That quote was from our great Martin Scorsese,” Bong Joon-ho said in his Oscar acceptance speech.
“Emotion and music are universally shared values, but it is still important to localize some parts of the content,” SmartStudy CFO Lee Seung-gyu said Nov. 29 at K-Startup Week ComeUp 2019. “BTS also used a similar strategy. They sang in Korean but the way they communicated with global fans was localized.”