As the shares of producer Barunson E&A and its affiliate saw a strong upshot over the past week, investors in the firms’ mezzanine instruments are exercising options to convert them into shares to boost valuation in their asset holdings and seek an easier exit opportunity.

Winasia Partners, a Seoul-based private equity firm, announced Thursday that it had opted to turn its 4.3 billion won ($3.6 million) convertible bonds issued by Barunson E&A into common shares on Feb. 27.

Instead of taking a total of 17 percent return for the five-year investment, which reaches maturity in April 2021, Winasia chose to go for the market value of the company. 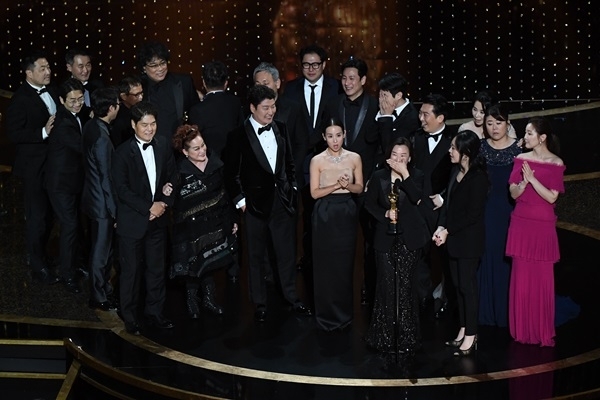 “Parasite” was named best picture at the 92nd Academy Awards on Feb. 9. (Yonhap)

As of the closing on Feb. 14, Winasia’s investment in Barunson E&A translates into a 107 percent increase from the fixed conversion price, as its 2.2 million shares were worth 8.9 billion won on Friday. Barunson E&A hit the price ceiling for two consecutive days until Thursday and fell 18.2 percent Friday.

In June 2018, BTC Investment invested 1 billion won in Barunson’s four-year bonds that could have brought a 12.5 percent return in total unless converted into stocks.

But exercising the conversion option, BTC Investment’s asset value soared 200 percent, as its 491,400 shares were valued at 3 billion won Friday. The securities will be converted Feb. 24.

Both Barunson E&A and Barunson are listed on the Korea Exchange’s development board Kosdaq. KRX ordered a three-day periodic call auction to both firms Wednesday and advised investor discretion. On Thursday, the firms were issued prior notices on one-day trade suspension.

Also on Feb. 14, convertible bond investors in Kosdaq-listed Soribada said that by early March, it would convert bonds into shares so that their fixed value of 7.2 billion won would rise to 9.3 billion won as of Friday.

Soribada is the parent company of Will Entertainment, which houses actress Lee Jung-eun. Lee played housekeeper Moon-gwang in “Parasite.” Soribada fell 1.6 percent over the past week.

Other investors including state-owned KDB Capital, hedge fund Ryukyung PSG Asset Management and venture capital houses such as Company K Partners, Union Investment Partners and Timewise Investment are expecting windfalls as they backed the $11 billion production of the movie, which has raked in over $165 billion globally.

These are the latest actions of investors after “Parasite,” directed by Bong Joon-ho, brought home four Oscar wins in the 92th Academy Awards on Feb. 9, including best picture.