It is not just children who need playgrounds but also senior citizens, experts said at a forum that took place at the National Assembly earlier this week.

Co-hosted by three lawmakers -- Kim Bu-gyeom, Jeon Hyun-hee and Kim Sung-shik -- the forum on Feb. 11 discussed the necessity of places for physical and mental activities for elderly people.

“With the proportion of senior citizens increasing in the total population and many of them living alone, cultivating senior culture is becoming more and more important,” Ko Min-jung, the chairman of FunFun Culture Foundation, who suggested senior playgrounds, said at the forum. “Outdoor activities could provide enhanced joy for them and change their life pattern which is mostly confined indoors.” 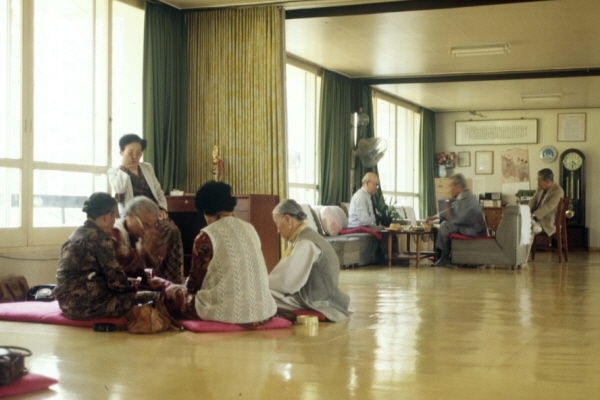 Cap: Inside of a senior center (unknown)

Currently, elderly welfare measures focus on indoor senior citizen centers. For instance, out of 66,262 welfare facilities for elderly people, 97.4 percent of them are senior centers in which they usually sit and chat while senior classes accounted for 2.1 percent according to research by the Gwangju Welfare Foundation in 2017.

“We need to create places where elderly people can still feel they are part of the society instead of trapping them inside senior citizen centers,” Ko emphasized.

She insisted that senior citizens need sports equipment tailored for those with weaker muscles and bones.

“Since elderly citizens are weak and exposed to falling accidents, regular workout machines are usually not suitable for them,” she added. “They need simple exercise machines such as a simple stepping exercise machine.

Ideally, it would be the best if playgrounds embrace all generations, experts said.