Hyundai Motor Co. and its sister company Kia Motors Corp. said Tuesday they have suspended some of their assembly lines here due to shortages of parts from China amid the spreading coronavirus outbreak.

Hyundai Motor halted the assembly lines for the production of the carmaker‘s independent brand Genesis’s sedan models at its No. 5 plant in Ulsan, 414 kilometers southeast of Seoul, from Tuesday, a company spokesman said over the phone.

The company and its union also have agreed to gradually suspend assembly lines at the remaining four plants in Ulsan by Friday, with its two other domestic plants, in Jeonju and Asan, also scheduled to halt operations by the same day, he said. 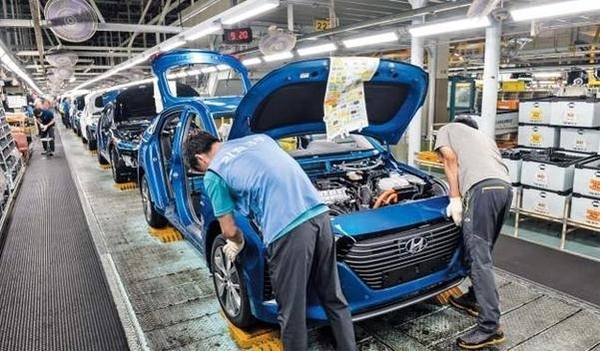 Employees work at an assembly line of the carmaker`s plant in Ulsan.
(Hyundai Motor)

They expect the plants will be suspended until Feb. 10 or 11 as the company is expected to obtain some stocks of wiring harness parts, a key component for a variety of models, from domestic companies.

The Chinese authorities called on manufacturers to stop operations until Feb. 9, a week after the end of the Lunar New Year holiday, to keep the new coronavirus from spreading.

“If auto parts factories in China resume operations on Feb. 10 or 11, production losses from lack of parts will be limited,” the spokesman said.

Hyundai Motor has seven domestic plants -- five in Ulsan, one in Asan and one in Jeonju -- and 10 overseas plants -- four in China, one in the United States, one in the Czech Republic, one in Turkey, one in Russia, one in India and one in Brazil. Their combined capacity reaches 5.5 million vehicles.

In an email message sent to workers at the Ulsan plants on Monday, Vice President Ha Eon-tae, head of Hyundai’s main plant, said it the suspension of certain car assembly lines in Ulsan is “inevitable” as South Korean parts suppliers in China have suspended production due to the Chinese government‘s restrictions on plant operations amid the coronavirus scare.

Kia, which is 34 percent owned by Hyundai, started reducing output at its plants in Hwaseong and Gwangju, outside of Seoul, for the same reasons, according to the union.

The company didn’t provide details about the suspension of assembly lines.

Kia has eight domestic plants -- two in Gwangmyeong, three in Hwaseong and three in Gwangju -- and seven overseas ones -- three in China and one each in the U.S., Slovakia, Mexico and India. Their overall capacity reaches 3.84 million units.

Hyundai and Kia, which together form the world‘s fifth-biggest carmaker by sales, are concerned about an extended shortage of auto components from their Korean suppliers in China.

Hyundai canceled overtime work over the weekend to produce the flagship Palisade sport utility vehicle at the Ulsan plant in an initial countermeasure to manage its parts inventories.

The fallout from the virus could deal a further blow to Hyundai and Kia, which have been struggling with declining sales in China, the world’s biggest automobile market, in the past three years.

In China, the carmakers‘ sales remained weak due to the lingering impact of political tensions between Seoul and Beijing over the deployment of an advanced U.S. missile defense system, called THAAD, in South Korea in 2017.

In April last year, Hyundai shut down one of its five plants in China, and in May, Kia suspended one of its three plants there due to lower demand.

Since emerging out of the Chinese city of Wuhan late last year, the new coronavirus has killed at least 425 and infected 20,438 people in China as of Tuesday and reached 24 countries, as far away as the U.S.

South Korea has reported 16 confirmed coronavirus cases as of Tuesday.

On Tuesday, SsangYong Motor stopped the operations of its sole car assembly plant in Pyeongtaek, 70 km south of Seoul, and will maintain the suspension until Feb. 12 due to the supply crunch.

“We will decide whether to extend the period depending on supply conditions in China,” a SsangYong Motor spokesman said.

GM Korea and Renault Samsung said they are closely monitoring the situation involving the novel coronavirus to minimize the impact on production.

“We don’t see any immediate impact on our production as we can receive wiring parts from our alliance partners Nissan Motor and Mitsubishi,” a Renault Samsung spokesperson said. “But if the virus continues to spread, there will be some shortages of parts.”

This file photo provided by Hyundai Motor shows an employee working at an assembly line of the carmaker‘s No. 2 plant in Ulsan. (PHOTO NOT FOR SALE) (Yonhap)