When Michelle Kim, former head for the Asia-Pacific region at Tiffany & Co., worked in the iconic jeweler’s international department, the majority of her colleagues were men and so was the entire top management. 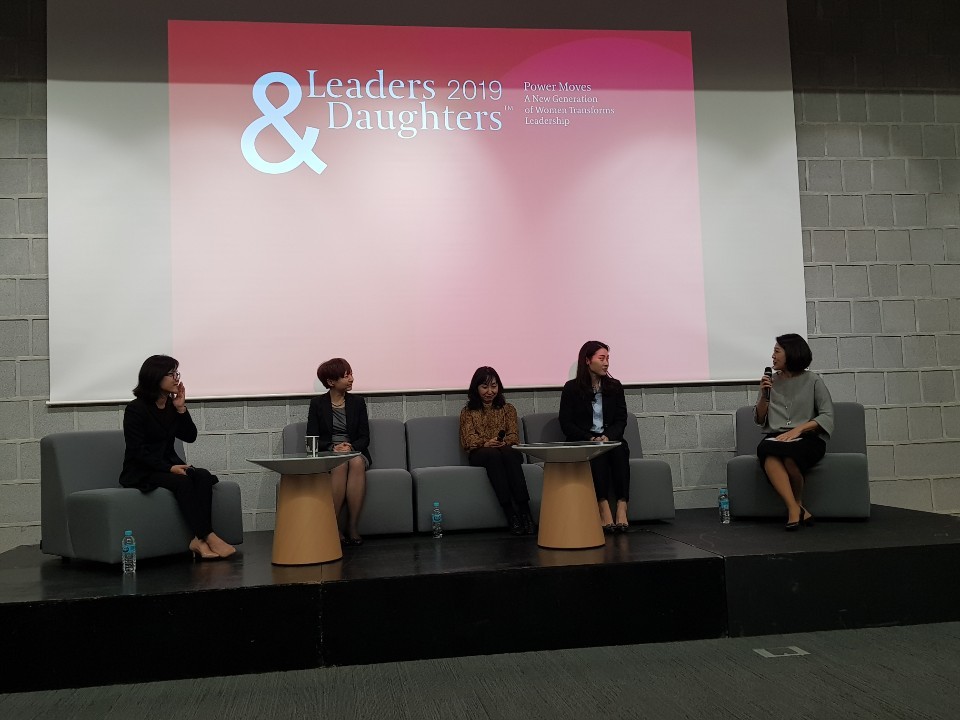 But instead of hiding away in the minority, Kim said she started “demanding” -- both from the organization and from herself.

“I demanded more work and did more work. Not in a very aggressive way … but that’s how I got the bigger title, even though it was not the title itself that I pursued,” she said on the panel of speakers at the annual Leaders & Daughters event hosted by global advisory firm Egon Zehnder’s Seoul office on Oct. 16 in Seoul.

The event was co-hosted by and held at Seoul Foreign School this year as an opportunity for students and their parents to communicate with business trailblazers, who candidly shared advice and anecdotes on career paths and leadership values, Egon Zehnder said.

Egon Zehnder has been organizing the event for the past three years to bring together women leaders across diverse industries and families with international backgrounds.

The panelists addressed the reality of gender inequality in the workforce and tackled a reality where women sometimes involuntarily contribute to building the barriers that hold them back from equal power and influence, drawing on their international work experience spanning over two decades.

“Women tend to be doubtful of their ability,” Yoon said, echoing Kim’s message to demand more, while shedding light on how keeping a close mentor by one’s side can help a person navigate her way through career paths.

“Throughout my career, I had mentors and coaches that threw one-liners that changed things,” she added.

“At Reuters, you have to apply for certain positions to get it (they’re not just handed to you). I saw a lot of women who are overqualified for the positions shy back, while men, who unfortunately were sometimes only capable of doing 50 percent of the job, be confident, thinking that they will learn the rest on the job.”

Working moms struggling to balance household responsibilities is a key issue of gender inequality in the workforce, and Juliet Kim addressed the feeling of guilt that women are burdened with under such circumstances.

“Women have to balance their life more than men in terms of child care,” she acknowledged. “There were a lot of working moms who felt guilty of dedicating so much of their time on work. One of the ways of balancing this out, for example, is like in Netflix, where they hand equal amount of parental leave for both male and female.”

“I believe this sets a good model for children, who are changed by their dad’s presence during the first six months of their lives,” she added, indicating corporate policies to promote gender equality can shape gender-balanced atmospheres within families.

Han, who said she herself was still “climbing up the ladder” compared with the other panel members in senior-level positions, noted the growing imbalance of men to women as she journeyed up the ladder.

“The female ratio gets extremely low as I climb up the ladder as many quit their job due to conflicts that stem from child care,” Han said. “But I’m hopeful -- the changes might be slow and gradual, but I’m seeing the change. I think I’ll be able to take my career into my 40s and 50s.”

Through its collaboration with Seoul Foreign School, this year’s Leaders & Daughters also saw participation from the school’s Girl Up club, part of a global movement of young female leaders to raise awareness about gender equality and bring about change. It was founded by the United Nations Foundation in 2010, and many schools around the world participate.

The four members of the club took turns introducing panelists prior to the discussions. “It’s great to hear real-life examples and success stories of female leaders, and even better that the panel comprises Asian leaders in powerful positions,” the club told The Korea Herald before the event.