VCNC, the operator of ride-hailing service Tada, unveiled an aggressive nationwide expansion plan that would see it operate 10,000 cars and employ 50,000 drivers by the end of 2020, the company said Oct. 7.

The mobility platform, launched a year ago, operated 1,400 vehicles with 9,000 drivers as of end-September while the number of registered users reached 1.25 million.

As part of the expansion plan, the company said it will invest heavily in artificial intelligence and data, adding that the company’s technology has shortened estimated arrival times by 26 percent and increased calls for one car by 113 percent. It will also continue to increase partnerships in micromobility and autonomous driving technology to boost the ecosystem for the country’s new mobility industry. 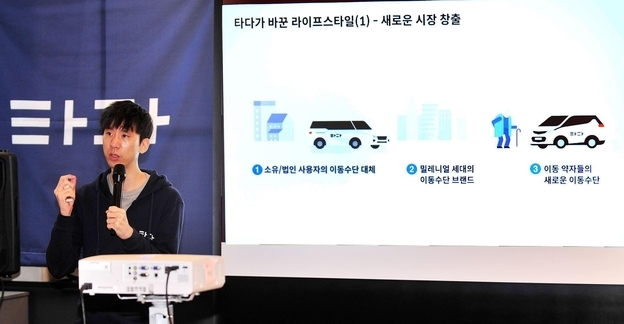 “Tada has built a new mobility system and has grown fast with AI and data technologies,” Park Jae-uk, CEO of VCNC, said. “We will focus on nationwide expansion in 2020.”

Tada was launched by car-sharing platform SoCar, which in July last year acquired VCNC, then best known for a communication app for couples. In October Tada launched its signature Tada Basic, a van ride-hailing service with 11 seaters, and has widened its business scope by introducing Tada Premium, a taxi-hailing service for high-end cabs, as well as Tada Business for companies.

Tada has grown despite intense tension between ride-hailing apps and the taxi industry, which strongly opposes Uber-like ride-hailing services. The taxi industry even filed a lawsuit against Park and So-Car founder Lee Jae-woong earlier this year in an attempt to stop Tada from operating. Tada uses a legal loophole to operate its van-hailing service since passenger cars cannot be used for commercial purposes under Korean law, which makes an exception for minivans.

Tada’s premium taxi service was the company’s answer to new regulations requiring companies such as VCNC to obtain taxi licenses, which authorities introduced to resolve the dispute between the taxi drivers and mobility companies.