Hyundai Heavy Industries has been grappling with growing opposition from workers against a merger with Daewoo Shipbuilding & Marine Engineering.

In March, HHI signed a formal deal, worth an estimated 2 trillion won ($1.7 billion), with the state-run Korea Development Bank to buy its smaller rival DSME. The deal will be completed when the world’s two largest shipbuilders get approval from antitrust watchdogs in Japan, China, Kazakhstan and the European Union.

The authorities will review whether the possible merger of the two major shipbuilders may reshape the global shipbuilding landscape with their dominant market position. If any antitrust regulator refuses to approve the request, the merger is likely to flounder.

In getting the approval, DSME workers are becoming an obstacle. 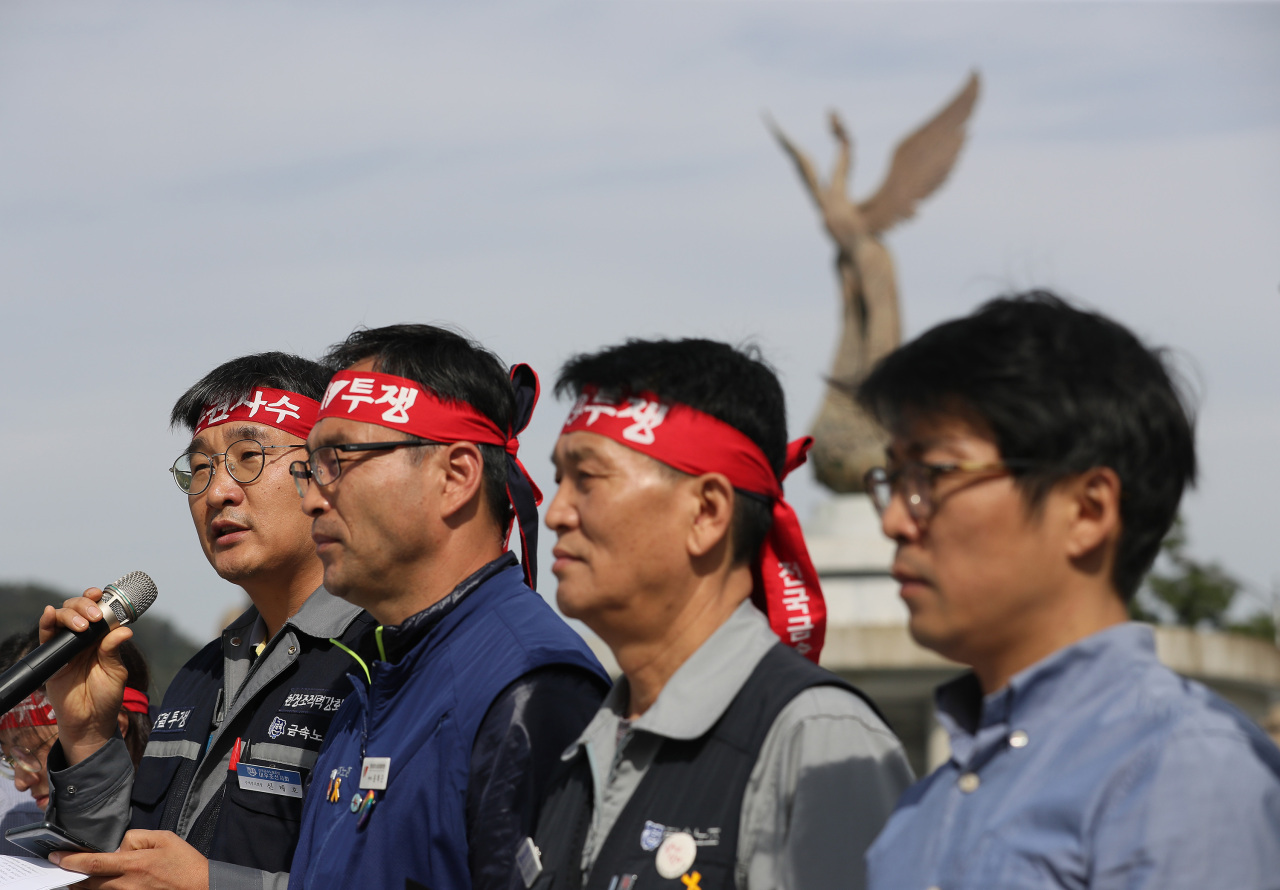 Unionized workers at Hyundai Heavy Industries deliver a statement ahead of their trip to the Directorate-General for Competition of the European Commission in September to express their opposition to HHI-DSME merger.
Yonhap

Last week, the DSME union members visited the European Union’s competition commission in Brussels, Belgium. They met with commission officials to urge the institution to disallow the tie-up, citing the case of Siemens and Alstom. In February, the merger of the German and French firms had been rejected by the commission on the grounds that it would create an undisputed market leader, reduce competition and disadvantage customers.

The workers’ visit to the EU commission is bad news to HHI as the region is already not favorable to the merger. In Europe, the two shipbuilders’ key clients are concentrated. When the two are merged, European clients may have a weaker price bargaining power as the shipbuilders will no longer compete for price.

Andreas Mundt, president of Germany’s Federal Cartel Office, told Korean reporters in March that a merger was “not a solution” to overcoming the crisis faced by the companies from a market perspective.

At home, the DSME union members, together with local civic groups, also issued a protest statement to Joh Sung-wook, new chief of Korea’s antitrust watchdog, asking him to disapprove the tie-up.

They said the FTC should keep in mind its mission of regulating monopolies and curbing the concentration of economic power. “The FTC should not approve the tie-up only because of efficiency and the rationalization of industry.”

In June, the union also blocked Hyundai Heavy from making on-site inspections at Geoje Okpo Shipyard, DSME’s core production facility. HHI failed to conduct its inspection due to fierce union opposition. HHI said it would delay the field inspections until the merger is approved by overseas authorities.

“The number of HHI employees who side with the merger is increasing, and we will continue to persuade DSME union members,” he said at the 16th Korea Maritime Day Celebration held last month.

An HHI spokesperson said it would faithfully respond to the evaluation timeline and process to meet the standards of each antitrust regulator.

When the deal is completed, the firm’s global market share will increase to 21.2 percent at 16.9 million compensated gross tonnage. It is three times higher than the third-ranked Japanese Imabari Shipbuilding. As for value-added liquefied natural gas carriers, the share will be around 60 percent.