The decision by the National Tax Service comes six months after it launched a special investigation of the entertainment mogul following the so-called Burning Sun scandal. The night club is owned by former Big Bang member Seungri, who is being probed by the police for offering prostitutes to his foreign investors.

The tax amount is significantly higher than 3.5 billion won the entertainment company was charged during a regular tax audit in 2016, but the company avoided tax evasion changes, local reports said.

The additional tax penalty adds to the mounting pressure on the company, which is also facing a payback of 67 billion won it received from LVMH in October 2014. LVMH’s investment unit Great World Music Investment holds 1,359,688 redeemable convertible preference shares of YG Entertainment with an option to convert them into common shares at 43,574 won apiece or get back 67 billion won by Oct. 16. 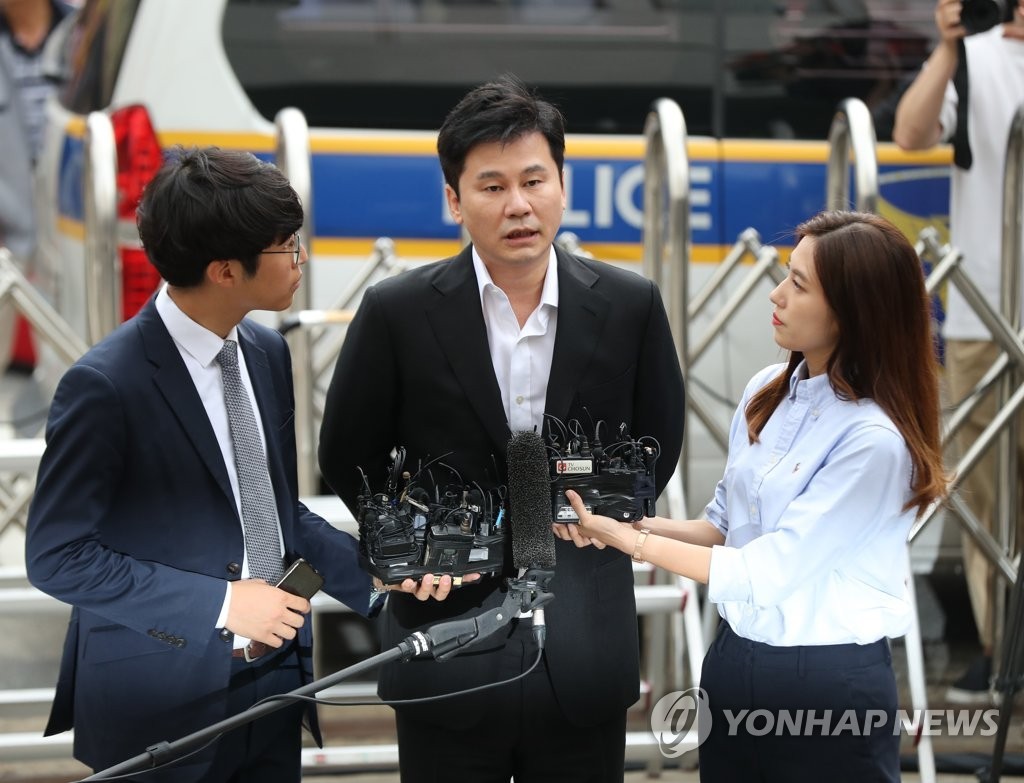 Yang Hyun-suk, former CEO of YG Entertainment, is surrounded by reporters as he leaves the office of the Seoul Metropolitan Police Agency`s Intellectual Crime Investigation Team in Seoul, on Aug. 30, 2019, after being questioned about his gambling and pimping charges.
Yonhap

The company’s share price has halved since it hit the highest level of 50,800 won on Jan. 7 and it appears to be extremely difficult to recover soon with more police investigations scheduled.

The founder and former chief producer Yang Hyun-suk is still under investigation for pimping charges and is also scheduled to be grilled for gambling overseas and illegal trading of foreign currencies.

Former iKON member B.I. was summoned for questioned by police on Sept. 17 for drug use. Even though B.I. left YG after the drug charges, the police are investigating whether he was involved in attempts to change the testimony of drug dealers.

Some market watchers speculate that it is unlikely that the company will suffer financial distress from recent taxes or anticipated payback of 67 billion won because it has 46.6 billion won in cash reserves and cashable assets and 106 billion won worth short-term financial assets as of end-June. But they agreed that the on-going police investigations will continue to hurt investor sentiments and it is unlikely that its share price will recover anytime soon.