[INVESTING IN KOREA] Can Sonokong become a Korean Marvel?

The ubiquitous toys of domestic toy seller Sonokong range from the megahit transformation car-robots “Turning Mecard” to “Sofy Ruby” (also spelled Sophie Ruby), an ordinary girl on an adventure to save a prince stuck inside a sketchbook. 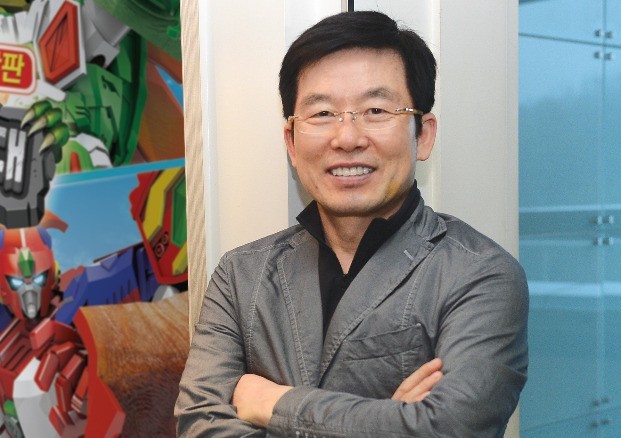 They are popular at toy stores, homes with children and even on streets with banners promoting concerts feature the popular heroines.

Sonokong’s toys are designed to usually only work as a series and a collection, giving them a kind of cult status that often makes them the only viable gifts for children.

"It is not surprising that my sons collected the whole collection of Turning Mecard because they talk about it at school and at home. I am always persuaded to buy them when they say all their friends have one,” said a 39-year-old mother surnamed Jung, who has two elementary school kids.

Turning Mecard is not a sudden success for Sonokong. It was rather a long wait for CEO Choi Shin-gyu.

In 1986, Choi established Seoul Chemical to begin the toy business and made a big gain with ingenious items such as toy vending machines. Ten years later in 1996, he changed the company’s name to Sonokong, which refers to the Chinese mythological character Sun Wukong, or the Monkey King.

From the early stages, Choi quickly became known as a trailblazer in the domestic toy industry, frequently releasing successful toy series, topping the domestic market and giving him the nickname of “toy president.”

Some of his inventions include gooey slime -- Ggeunggeunyi in Korean -- that sticks on the surface and slowly slimes down to the joy of children. He upgraded the slime toy in 1983 by using nontoxic materials developed through eight-months of study and research. With sales of more than 10 million units, the product brought him 4 billion won ($3.36 million) in profit.

This was followed by more successes in a broader range of toy categories. Among them is Top Blade, a hybrid version of a top-spin that uses a blade to spin faster. It was first released in the 1990s and was very popular with elementary school students. Through Top Blade, Sonokong raked in 100 billion won in accumulated sales by selling 20 million toys until 2002.

In 2014, Choi stepped down as CEO. The company explained that it he wanted to focus more on developing game software at Choirock Factory, an unlisted company set up in 2007 that creates and manufactures toys, animations and games and is fully controlled by the Choi family.

But Choi was still involved in company, leading it to more success. It was at this point that the hit series of successful toys such as Turning Mecard and Hello Carbot were born to help the company’s portfolio.

Each season, the toy maker has come up with different characters for Turning Mecard, combining them to create a signature mini car with intrinsic puzzle-like transformation features that pop into a full creature with a single touch to a magnetic “card.” Its spin-offs include Dinosaur Mecard, Ghost Mecard and more.

“I had to look for second-hand sales from online communities to get my son the latest toy, which was priced double than the original price. But I still had to get it because every time my son watches the character on TV, he wouldn’t stop saying that he wants one,” a 30-year-old mother said.

Market insiders say since Hello Carbot and Turning Mecard, the marketing strategy of featuring character toys in TV animation shows expanded rapidly in the country. The spin-offs would even lead to nationwide tours of musicals featuring the main characters.

“These days, it has become a standard for toy makers to launch a TV animation show prior to the actual launch of toys, as they do not sell without TV shows,” said an industry insider.

Sonokong debuted on the Kosdaq, Korea’s secondary bourse, in 2005. Its assets came to 104.3 billion won as of February and has around 100 employees.

Through the deal, Mattel acquired an 11.99 percent stake in the company from Choi for 13.97 billion won.

Sonokong also signed a two-year agreement for exclusive rights for sale, marketing and distribution of Mattel products such as Barbie dolls, in an effort to attract a wider customer base among girls who are relatively less attracted to minicars or robots.

The toy maker has said despite the Mattel acquisition the management will stay unchanged.

However, due to its ownership structure, Sonokong’s operating profit margin stood at 8.3 percent last year, lower than that of its rival Aurora World with 11 percent.

Meanwhile, the toy company has recently been mired in controversies, including allegations of embezzlement and unfair trading.

In March, some Sonokong employees sued Chairman Choi for using company funds for personal purposes, including spending over 87 million won for his mother’s 99th birthday party in 2011.

Rumors also circulated that there were unfair trade practices between Sonokong and Choirock -- Sonokong apparently paid an overly high production price to Choirock for lines such as Hello Carbot and Turning Mecard.

Choi’s son Jong-il is CEO of Choirock, owning a 45 percent stake. The chairman’s wife Lee Hee-sook holds a 10 percent stake and the rest is owned by other family members.

The total value of Choirock is estimated at about 21.3 billion won.

Former Sonokong Chairman Choi denied such rumors in a press conference and said that he used money from a game company that is 100 percent owned by him and not a Sonkong affiliate.

But Sonokong has also been facing a barrage of consumer complaints over its sales strategy. 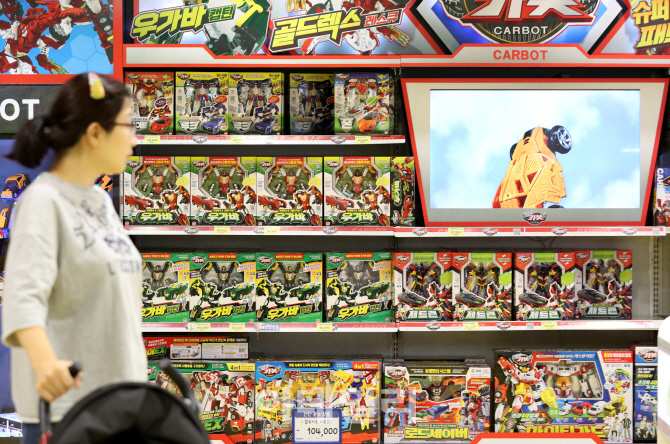 Sonokong toys on display at a local supermarket.

To buy the latest item in the Hello Carbot or Turning Mecard series, for instance, customers need to purchase a set which includes two older pieces.

For example, Hello Carbot’s Tyranno is sold at 128,000 won, which includes three character robots -- Klion, Tyrannotooth and Core -- which completes a Tyranno robot when the pieces are combined.

“Klion is one of the oldest and consequently least popular characters, but to buy the new model, customers need to purchase things as a set including Klion, so it's definitely a waste of money,” wrote a woman on an online community.

“Some of Sonokong’s sales strategies have harmed the company’s image,” said professor Lee Young-ae of consumer business from Incheon University.

“Especially with shifting consumer trends, since they now actively raise their voice, as well as increased quality of children products, companies in the children business must know that their business is not only related to their target customers -- children -- but their parents and the entire family,” she added.

Sales also suffered. In 2016, Sonokong’s operating profit logged 3.7 billion won, a 65 percent fall from the previous year. In 2017, it recorded an operating loss of 11.9 billion won.

“The popularity of Turning Mecard was at its peak in 2015 and 2016, but declined the following year. To deal with the inventory stocks, we sold products at lower price which led to a deteriorated operating profit rate,” said a Sonokong official.

According to its regulatory filing, Sonokong recorded sales of 100.4 billion won last year, a 3.5 percent fall on-year, but its operating profit and net profit returned to the black, 800 million won and 1.1 billion won, respectively.

Sonokong says it plans to launch a new toy lineup during the latter half of this year, by closely working with domestic and international partners.

“We have many (toy manufacturing) partners internally and externally. We will discuss about a new toy lineup and ways to bring them to the Korean market as we have been doing until now,” an official said.