Civil activists have vowed to prevent the troubled chief of Korean Air from getting paid billions of won worth severance pay should he leave his post as chairman.

Cho Yang-ho, who was ousted from the board of directors on March 27 during a shareholders meeting, heads Hanjin Group which includes the country’s flagship airline.

Two civil activist groups -- People’s Solidarity for Participatory Democracy and Solidarity for Economic Reform -- said in separate statements that Cho’s projected severance pay, estimated at around 60 billion won ($52.78 million), is excessive and warned of taking legal action, should he be paid that much. 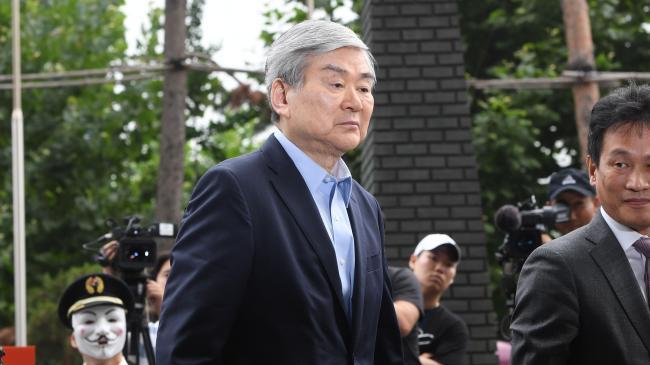 Cho has led the airline as chairman since April 1999, prior to which he was an executive since 1980s.

He would be eligible for 39 years severance pay during which he served as a board member, according to the civil activist groups. Their estimates took into account that his salary was 3.1 billion won last year.


The size of the severance package was decided in 2015 when the shareholders decided to pay six months’ worth severance pay for each year Cho served as chairman. The National Pension Service, which held a 5.25 percent take, then opposed the proposal calling it unreasonable but to no avail.

“We will file a lawsuit opposing Cho’s undue severance pay once it happens,” Kim Kyung-yul said on April 4 during a radio interview.

A lawmaker even called for him to voluntary give up his severance pay, saying that Cho, son of Hanjin Group’s founder Cho Choong-hoon, is responsible for the airline’s management failure. “The reason Korean Air is suffering now is because of the Cho family’s abuse of power. He should take responsibility and forgo the severance pay estimated at over 70 billion won,” Chae Yi-bai said in a statement.

The airline’s operating profit fell more than 30 percent to 640 billion won in 2018 from 940 billion won the previous year. But Cho’s annual salary increased by 200 million won to 3.1 billion won during the same period even though he was embroiled in a series of charges that include dodging inheritance taxes and embezzling company funds. His family members have also come under fire for mistreatment of company staff.

Activists argue that a slew of scandals caused by Cho’s family members have had a negative impact on the company’s brand and share value. In addition, Kim said the company’s profits have not been used for the group’s best interests, citing 800 billion won funds directed to save Hanjin Shipping and embezzlement worth 27 billion won.

A company official told The Investor that there is no plan for changes in Cho’s role at the moment.