Executives of local night club Burning Sun, including Seungri who was an inside board director, are being accused of conducting drug-riddled parties and condoning sexual assaults on customers. 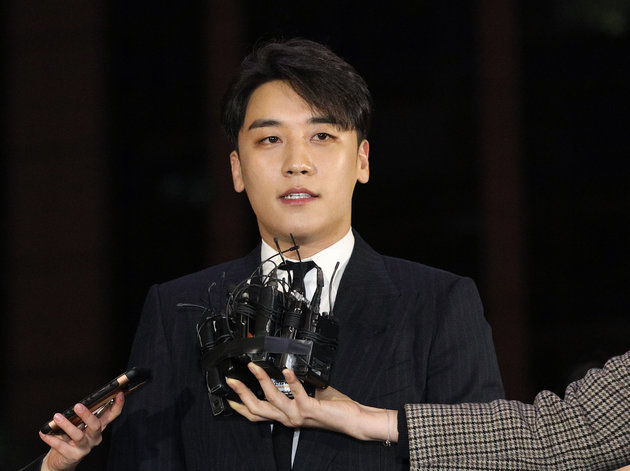 Burning Sun was a popular club in Southern Seoul that shut down in the aftermath of the scandal.

Immediately after the news broke, YG said in a statement that Seungri never directly participated in the club's management, and that he has resigned from his post at Burning Sun.

But the performer was once again thrust under scrutiny last week when a local news outlet reported that he may have indeed solicited prostitutes for investors from Taiwan, based on his KakaoTalk messages. YG denied the charges and said the messages were manipulated and untrue. Despite it, Seungri voluntarily approached the police to be interrogated.

As of March 5, the entertainment company’s stocks closed at 40,800 won.

Most industry insiders, however, appeared to be unfazed. They believe prices will soon recover, since other Big Bang members like G-Dragon and T.O.P also faced drug scandals in the past without the fandom toward the boy band being affected.

Some sources noted that the scandal will disappear when Seungri enlists in the army, which is due soon.

She added that news about YG artists like Blackpink can provide new momentum for the company and help reinstate the stock price.

Furthermore, the analyst predicted that YG’s new boy band Treasure 13, which is preparing to debut during the first half of this year, will eventually boost the agency’s stock value.

Analyst Lee Gi-hun from Hana Financial Investment had a similar assessment in a separate report, which said “Treasure 13 has four Japanese members, so it is highly likely to be successful in Japan and worldwide.” He also forecast further growth for YG over the next three years after Blackpink releases a comeback album and embarks on a global tour.

Some naysayers do say that there is lingering possibility of the decline lasting longer due to Big Bang’s significant contribution to sales. According to sources, band’s fans account for more than 79 percent of those who attended YG concerts in 2017.

YG stopped disclosing information on sales of individual bands since 2011, but revenue from Big Bang-related goods and concerts is estimated to have taken a majority share. Back in 2011, Big Bang-related sales reached 33.6 billion won, which accounts for more than 75 percent of the company’s sales, which posted 44.7 billion won.

Another worrying reason is because unlike other artists who were embroiled in controversies, Seungri is part of the management. YG Chairman Yang Hyun-suk in June last year appointed him as CEO of the DJ management unit NHR, which was acquired through its subsidiary YGX in May last year.

“Seungri has been scouting for talented DJs, but he was not officially registered as part of the management team. YGX will be managed by co-Chairman Lee Jae-wook and Kim woo-jin without any problems,” a spokesperson told The Investor, adding that since he has to attend his mandatory military service soon, he will naturally not be involved with NHR.