[THE INVESTOR] Mobile payment app Toss won the grand prize at The Investor’s Choice 2018 on Wednesday for offering a simple way for money transfers via smartphones to over 10 million users in Korea.

The awards ceremony focusing on promising startups was hosted by The Korea Herald’s investment news platform, The Investor.

Toss CEO Lee Seung-gun, who received the Quantum Award at the event held in Seoul, said his never-give-up spirit led accumulated transactions via the service to reach a whopping 26 trillion won ($23 billion), and Toss will seek to go beyond the Korean market. 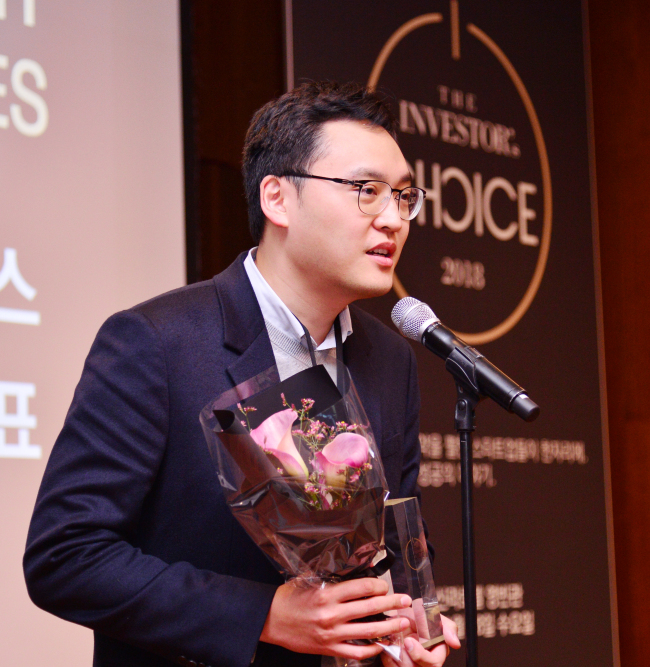 Toss CEO Lee Seung-gun speaks at The Investor`s Choice after receiving the Quantum Award on Nov. 28 in Seoul. Park Hyun-koo /The Korea Herald.

“I think the company is still in an early stage of development. With a long-term commitment, we hope to make a global impact and become a unicorn startup by pushing boundaries of the local market territory,” he said.

The Quantum Award is given to a startup judged to be the most inspirational and innovative by a panel of experts and investors including Korelya Capita CEO Fleur Pellerin, London-based Founders Factory Executive Peony Li, SparkLabs co-founder Bernard Moon and Lotte Accelerator CIO Lee Jong-hoon.

Four companies -- Memebox, Yanolja, Blocko and Fastfive -- were given the Next Award, which recognizes startups with the potential to become the next Quantum winner.

Memebox Global President Kim Do-in said the startup is becoming the company that he had in mind when he founded it in 2012 -- innovating beauty ideas with the power of technology while going global.

“Memebox will continue to communicate with customers in order to rapidly respond to market trends and understand their needs,” Kim said.

Yanolja, operator of the popular accommodation-booking app in Korea, pledged to expand its business overseas and offer a broader scope of travel services.

“From next year, we will stand at a time of challenge for targeting overseas markets. Our investment into Singapore-based Zen Rooms and an alliance with Rakuten to enter Japan’s vacation rental business were strategic decisions for the plan,” said Shin Sung-chul, general manager of Yanolja. 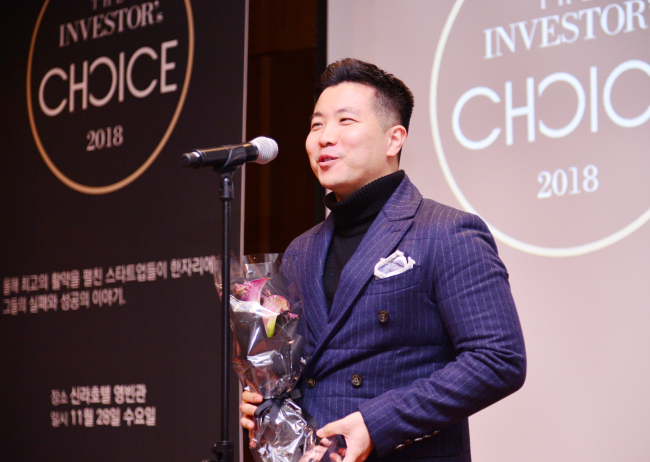 Memebox Global President Kim Do-in delivers a speech after receiving the Next Award at The Investor`s Choice, a startup conference, on Nov. 28 in Seoul. Park Hyun-koo/The Korea Herald.

Meanwhile, commercial blockchain startup Blocko CEO Lee Jin-seok aims to capitalize on the next stage of the technology with its middleware platform for digital identity and payment services. “Our flagship Coinstack has been widely adopted by big financial and tech firms like Lotte Card and Hyundai Card, and the number of clients are expected to grow to give a wing to our business.”

Another Next Award recipient Fastfive, a shared office startup, was recognized for generating strong growth in just four years since its foundation.

“We have a plan to build a strong platform in the first five years and offer services that improve the quality of life with content from the platform in the later years,” said Fastfive CEO Kim Dae-il.

The Mentor Award -- an award designed to encourage companies to make contributions for a healthy startup ecosystem -- was given to Mirae Asset Global Investment, Hyosung and Naver.