[THE INVESTOR] BUSAN -- G-Star, the largest gaming show in Korea, kicked off on Nov. 15, offering an opportunity for global game giants and small companies to showcase their flagship titles and attract new gamers.

During the game show, joined by some 700 exhibitors, visitors from here and abroad can not only play their favorite games and those that will be unveiled next year, but also participate in a range of sub-events, like talk sessions with developers and influencers and outdoor promotional events. Free gifts are also up for grabs.

Several hours before the opening scheduled for 12 p.m. at Bexco, the main venue of the conference, people formed long lines, getting ready to dive into the gaming world. 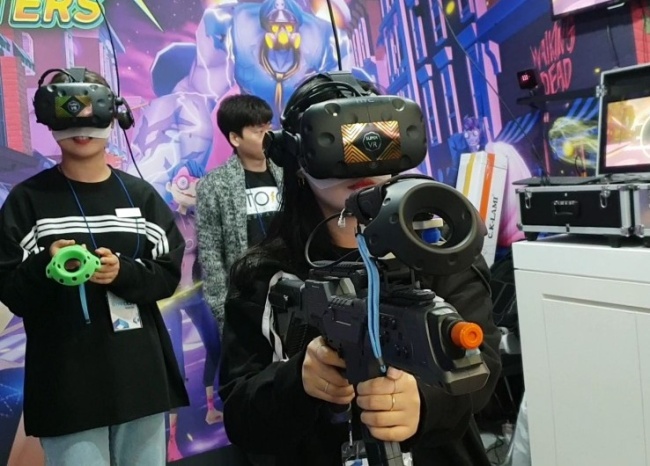 A gamer tries out a virtual reality shooting game at G-Star 2018, which is held on Nov. 15-18 in Busan. Kim Young-won/The Investor

“I come to this game show almost every year with some of my friends to check and play the latest games,” said Kim Min-seong, a high school student, who hopes to be a game developer in the future.

Since the college entrance test took place nationwide on the day, freshmen and sophomores did not go to school.

Inside the exhibition center were hundreds of dazzling booths featuring large-sized game characters, PCs donned with neon lights, and smartphone-installed podiums for users to play mobile games. Some models in eye-catching costumes based on popular game characters posed to attract visitors.

Longtime rivals Nexon, NCSoft and Netmarble were among the companies that had the largest presence at the event, setting up hundreds of mobile devices and PCs for users to play.

At this year’s G-Star, PUBG and Epic Games, two of the rising players in the battle royale gaming segment, also drew much attention from visitors.

PUBG’s booths were decorated with items featured in “PlayerUnknown’s Battlegrounds,” like a real-size open top jeep and a motorcycle with a sidecar.

In collaboration with Kakao Games, it showcased the mobile version of the same battle royale game.

Collaborating with Nexon, LG had 160 V40 ThinkQ and 295 G7 ThinkQ smartphones installed at its booth for visitors to play games with the mobile devices.

As a sideline event of the trade show, Google Play which operates the Android app store held a press conference. It invited its partners, including San Francisco-based app market data firm App Annie and Korean game developer Vespa to share their insights into the Android ecosystem as well as the success stories of partner firms.

“Partnerships are what enable us to build the platform and ecosystem that allows developers around the world to build great businesses,” said Purnima Kochikar, director of Google Play’s apps and games business development unit.

She added that the company will hold an indie developer award in Seoul next year to nurture fledgling game developers in the Asian region, which has seen a dramatic growth in terms of revenue and downloads in the app market.

Since being launched in 2004, the gaming show has been held for the past 10 years in the port city of Busan.

Taking part in a press briefing held before the opening of the game expo, Busan Mayor Oh Keo-don vowed to spend a total of 100 billion won (US$88.2 million) by 2022 to build a town dedicated to research and development for the gaming industry. The investment will be utilized to attract game developing companies to the city as well as nurturing talent in the segment.

“The gaming industry will play an integral part in the fourth industrial revolution, and Busan will try to contribute to the growth of the sector,” Oh said, adding that his government would first invest 8 billion won (US$7.09 million) to build an e-sports arena in the city next year.