[THE INVESTOR] Samsung Electronics is kicking it up a notch in the neck-and-neck competition in the smartphone market with its new mid-tier lineup, and is scheduled to take the wraps off its latest Galaxy A models in Kuala Lumpur, Malaysia, on Oct. 11.

As previously announced, it will unveil Galaxy A7, featuring three rear-facing camera lens, at the launch event. In addition, Galaxy A9 with four camera lenses on the back will likely wow the audience as well as Samsung fans around the world. 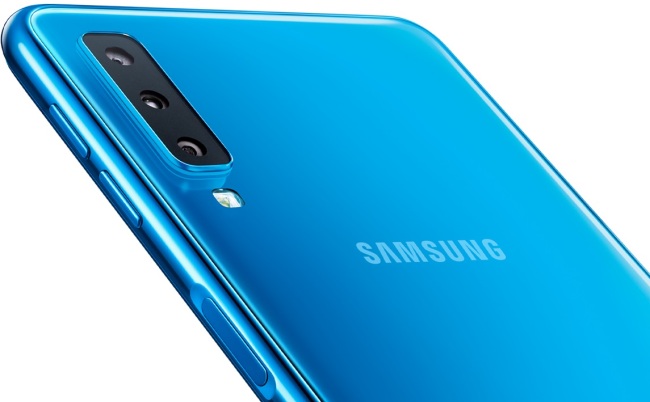 The A9, if unveiled at the event, will be the first smartphone with quadruple camera lenses. Based on leaked information, the four rear-facing camera modules, including ultra-wide, telephoto, and depth cameras, are lined up vertically. It comes with a 6.3-inch screen, 6-gigabyte RAM, and 128GB internal storage and supports facial and fingerprint recognition.

The A7, on the other hand, features a 6-inch screen, 4GB RAM, 64GB storage, and the biometric authentication systems.

Samsung’s mobile chief Koh Dong-jin has said that the tech firm would try to introduce advanced technologies in mid-range smartphones first in a bid to expand the customer base.

Some market analysts said, however, it would be an uphill battle for Samsung to improve its falling sales in the smartphone business.

Samsung posted a record operating profit of 17.5 trillion won (US$15.30 billion), up 20 percent on-year, in the July-September period this year, according to the firm’s earnings guidance published earlier this month. Among the three main business pillars, including chip and home appliances, only the smartphone business saw its operating income drop from a year earlier.

Around 1.38 million units of Galaxy Note 9, launched in August, were sold in the first month since its official release in late August, according to local investment firm Hana Financial Investment. The figure is 65 percent of that for the previous Note 8.