[THE INVESTOR] The CEO of embattled Shinil Group on Aug. 8 said it may scrap its plans for acquiring Jeil Steel.

“Under the circumstances, it has become difficult to pay off the installments, so we have asked Jeil to reconsider the deal based on thorough legal reviews,” he noted.

His remarks came after the police on Aug. 7 raided the office of Shinil Group and Donskoi International Exchange -- which is selling a cryptocurrency backed by the potential value of the shipwrecked Dimitrii Donskoii that Shinil had claimed to have discovered -- and six other locations for suspicion of fraud. 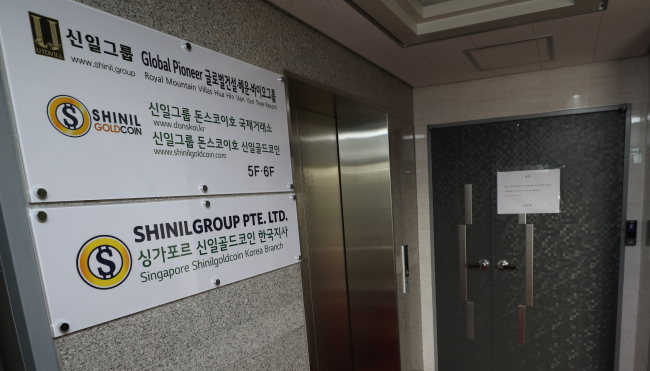 The police said today that it is tracking the money flow of company executives to see where the funds raised from the initial coin offering went.
Earlier last month Chae and Ryu Sang-mi, ex-Shinil CEO, formed an agreement to take over majority stake in Jeil Steel for 18.5 billion won (US$16.54 million). They paid the deposit of 1.85 billion won and part of the first installment of 200 million won on July 26. The remaining 675.8 million won was due on Aug. 6, but Jeil in a regulatory filing said it hasn’t received it.

Due to news of the potential acquisition, the announcement by Shinil -- an unlisted company -- about discovering Donskoii pushed Jeil’s stock prices up by more than 30 percent to 5,400 won from the previous average trading price of below 2,000 won. But as suspicions about the authenticity of the so-called “treasure ship” snowballed, prices nosedived. It is now trading at 1,360 won, stirring fury among investors that invested in Jeil stocks on hope of “treasure ship” discovery.

Shinil’s Singapore-based affiliate also collected funds from investors by promising to issue its own cryptocurrency Shinil Gold Coin, with “treasure” found in the ship as collateral. The seller Donskoi International Exchange website has closed down.

On the growing skepticism over the firm’s potential scam, Chae held a press conference on July 26, emphasizing it has discovered the hull of the battleship Dmitrii Donskoi that sank 113 years ago off the Korean coast. But as for the rumored 150 billion won worth of gold, he backtracked from the claim, saying it is unable to confirm the existence.