[THE INVESTOR] Korea’s unionized bank workers are likely to stage a strike in September for the first time in two years amid a feud with management over the introduction of a shorter workweek system and other key issues, according to the Korea Financial Industry Union on Aug. 8.

More than 80 percent of some 95,000 workers under the Korea Financial Industry Union voted on Aug. 7, with 90 percent approving the move, the union said.

The vote came as workers and management of financial firms failed to find a middle ground for 53 issues that they had been negotiating since April. The issues include implementation of a new workweek system and amending the extension of retirement age and wage peak system. 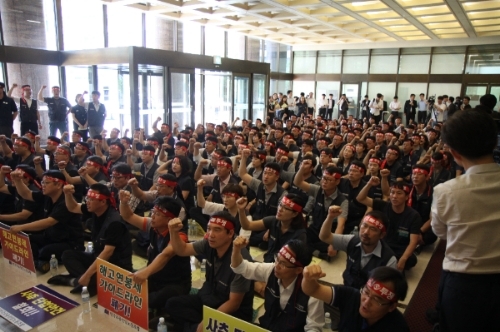 One of the major issues is the new 52-hour weekly working system under which the maximum work time was reduced from 68 hours.

Korea adopted the new system for companies with more than 300 employees starting from July 1.

Unionized workers are demanding an extension of retirement age from 60 to 63 along with a delay of the wage peak system to the age of 58 instead of 55.

The banks, however, argue that extending the retirement age and delaying the wage peak system are unreasonable considering they are under pressure to contribute to relieve youth unemployment issues.

Unionized workers last protested in September 2016 against the introduction of a performance-based pay system.

The Korea Financial Industry Union said they will unveil detailed plans for the strike on Aug. 9.