[THE INVESTOR] Although the gaming industry, valued at approximately US$116 billion, is huge in size, playing games is often considered just a pastime.

It is probably because games are rather irrelevant to the real world. What is achieved in the virtual world becomes sort of an illusion as soon as a player unplugs, and in-game money has no value offline.

In a bid to create real-world relevance, Israeli blockchain-based loyalty program developer Buff is building a solution that rewards gamers with cryptocurrency as a means of compensation for time spent playing games, and their in-game achievements. 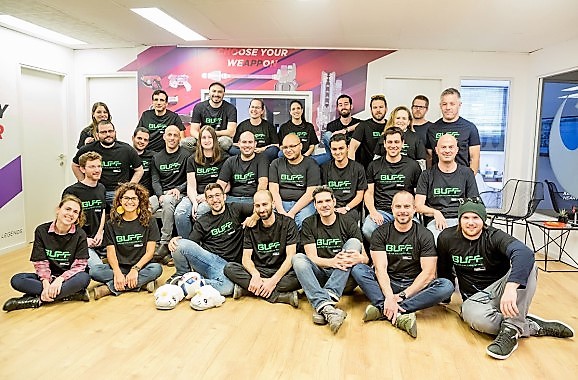 The Buff and Overwolf teams

“The more you play, the more you earn,” said Elay De Beer, CEO of Buff, in an interview with GamesBeat, adding, “It is a loyalty program for gamers on top of blockchain that allows gamers to earn something.”

Similar to Star Alliance mileages -- membership points that can be used like cash when purchasing flight tickets of different airlines -- the Buff coin, also called the ERC-20, allows gamers to buy in-game items across a variety of titles and platforms. The price of the coin will be set by user demand rather than the Buff team itself.

To earn coins, gamers just need to log in to their favorite games, spend a few hours, and make in-game achievements.

The Buff platform automatically tracks the player’s progress without interrupting gameplay, and data will be stored with blockchain technology in a secure and transparent manner.

Based on the performance in games, like “FIFA 18,” “League of Legends” or “Dota 2,” gamers will receive an appropriate amount of Buff coins, which can be traded with other players.

The company said the Buff solution can benefit game publishers as well since the loyalty program platform helps them to reach out to a new audience, improve the retention of existing users, and enables direct, automated interaction with players.

“Gamers trading in-game items using Buff can create a new digital trading market which could dictate the value of in-game items based on supply and demand, potentially leading to game publishers issuing new items (benefiting them as well as gamers),” the company wrote in its white paper.

“Establishing a loyalty program on Blockchain technology in the gaming industry will allow instantaneous creation of reward points that can be redeemed or exchanged in a fast, secure and transparent way across multiple platforms and between users and publishers -- all through a trusted environment operating without intermediaries.”

Buff plans to launch its public initial coin offering sale in the third quarter this year. Of the 300 million Buff coins to be issued, 20 percent will be sold during the ICO, another 20 percent will be held in reserve for game rewards, and the remaining will go to the Buff team.

The play-to-earn crypto solution developer has recently partnered with Overwolf, which offers overlay apps for a number of popular games, such as “League of Legends” and “Fortnite.”

Market watchers forecast business models like that of Buff which combine gaming and blockchain can invigorate the two industries in Korea and create a new market.

Korea is one of the six largest game markets in the world and one of the most vibrant cryptocurrency markets. Further, more than 1,500 game titles are released every month.

Game giants, including Netmarble, are currently running teams dedicated to blockchain and cryptocurrency in a bid to jump into the emerging markets.

The Buff team has not revealed any plans to cooperate with the Korean companies mentioned above, but it is anticipated that it would try to partner with some of them as it is trying to expand its operations in Asia.