[THE INVESTOR] The police on May 4 issued an arrest warrant for Cho Hyun-min, former Korean Air executive and daughter of the airliner chairman who allegedly assaulted an ad agency employee. She is also charged with business obstruction.

Hyun-min is the younger sister of Hyun-ah, who became notorious for her ‘nut rage’ incident back in 2014 when she threw a fit over how a bag of nuts were served and turned back an airplane. 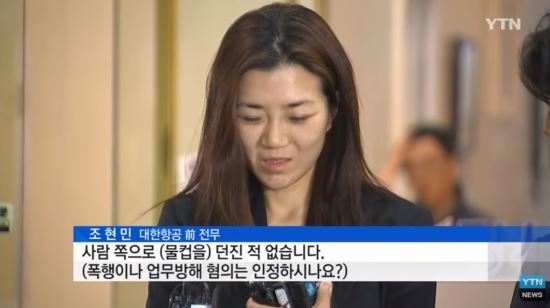 Below is the police report outlining its decision to issue the warrant for the younger Cho.


-The suspect denied the charges and made excuses, but a thorough review of statements from the victims and witnesses, and also that of recordings of the scene appear to prove that she did indeed commit the depicted crimes

-Digital forensics have proven that she discussed how to dismiss the matter with Korean Air, and also attempted to speak with and appease the victims

-Under the circumstances, we believe there is concern for destruction of evidence