[THE INVESTOR] South Korea's stock markets ended on a higher note on April 27 in the wake of a historical inter-Korean summit that signaled a road to denuclearization on the Korean Peninsula.

Earlier Friday morning, Kospi had breached the 2,500 mark at 2,508.13 in intraday trading for the first time in over a month. 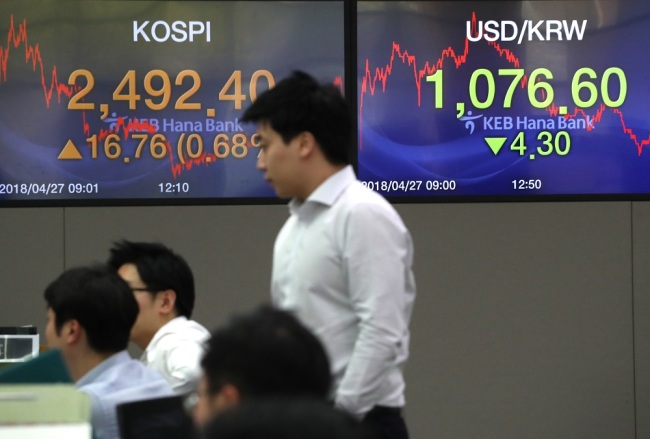 But analysts urged investors to remain cautious on heightening volatility on the stock market, despite signs of diplomatic and economic development in and around the Korean Peninsula.

Oh Jae-young, an analyst at KB Securities, acknowledged the Friday summit, the first one in 11 years, will serve as a “bridge to success” of an upcoming summit between Kim and US President Donald Trump, in a note to investors.

“If the two summits end in a success, these will contribute to the relief in geopolitical tension and subsequently lead to lowering the level of ‘Korea discount,’” wrote Oh, referring to a phenomenon of undervaluation of Korean capital markets due to risks involving North Korea.

But Oh also wrote the market will be subject to volatility for “as long as a year” depending on the procedures in shaping out plans for denuclearization and business cooperation.

“It will take a while for what was discussed in the summits to materialize” he added. “We have to keep an eye on the possibility of an increase in market volatility throughout the process of denuclearization, removal of sanctions and the following business cooperation.”

Indeed, stocks riding on anticipation of a construction boom in the coming of infrastructure-building projects in North Korea were weak on Friday. Hyundai Elevator for instance shed 1.1 percent and Eehwa Construction dipped 6 percent.

Other capital markets moved in line with the rerun of rapprochement in more than a decade.