[IFA] Harman CEO: Samsung AI speaker will be better than Google’s and Amazon’s

“The Samsung speaker will have a better AI platform than Google Assistant and Amazon’s Alexa,” Paliwal told The Korea Herald after a closed-door meeting with Yoon Boo-geun, head of Samsung Electronics' consumer electronics devision. He added that "a significant level of joint research and development of the device is underway."

The Harman CEO also stressed that the speaker would be a complete platform that supports operations of all kinds of home appliances and mobile devices, the ultimate goal of which is to establish an AI ecosystem.

On Sept. 1, Yoon held a confidential meeting with Paliwal at a private venue set up by Harman on the sidelines of the IFA 2017 in Berlin. 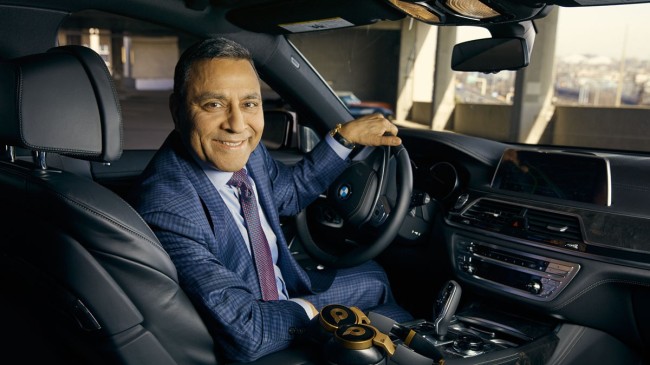 The AI speaker will be first product to be co-developed by Samsung and Harman since the US audio and car electronics maker was acquired by the Korean conglomerate for US$8 billion in March.

It was the biggest M&A project led by Samsung heir Lee Jae-yong to secure a new growth engine for the world’s largest provider of chips, handsets and home appliances.

“What we are going to launch will be a whole new ecosystem,” Paliwal said. “It will be a platform that will be able to connect all devices and home appliances.”

Paliwal added he will visit Seoul in October for meetings with top Samsung officials on operation and management issues of Harman.

Yoon and Paliwal’s meeting came a day after Yoon held a press conference, pledging to launch an unrivaled AI device next year but also expressing “devastation” about the absence of Lee Jae-yong, the de facto leader of the conglomerate who has been sentenced to five years in jail for bribery.

Maintaining his solemn face, Yoon on Sept. 1 also took an hourlong tour of booths at the 160,000-square-meter Messe Berlin by Samsung’s partners and competitors, including Miele, Bosch, Toshiba, Sony and Loewe, before reaching Harman’s private venue. The Harman room, located outside of the main exhibition hall, was closed to press and the public.

Yoon and Paliwal looked around Harman’s exhibition and moved to an observatory at the Funkturm Berlin Radio Tower located next to the Harman venue for private business talks.

Being aware of limited growth potential of the premium smartphone market, Samsung has been preparing to jump into the car electronics market.

Once the Samsung-Harman AI platform hits the market, it will bring nearly all objects to an unprecedented level of connectivity, Paliwal said after their talks.

Commenting that Samsung is already a company “better than Google and Microsoft” with sophisticated home appliances and wireless products and services, Paliwal said it would be unbeatable when the Samsung AI ecosystem was created.