[THE INVESTOR] Editor’s note: Samsung Electronics announced on July 27 that it posted record earnings in the April-July period on the back of robust chips, displays and smartphone sales. During a conference call in the morning, the firm also unveiled business plans for its core electronic components and smartphone businesses. Below is a summary. 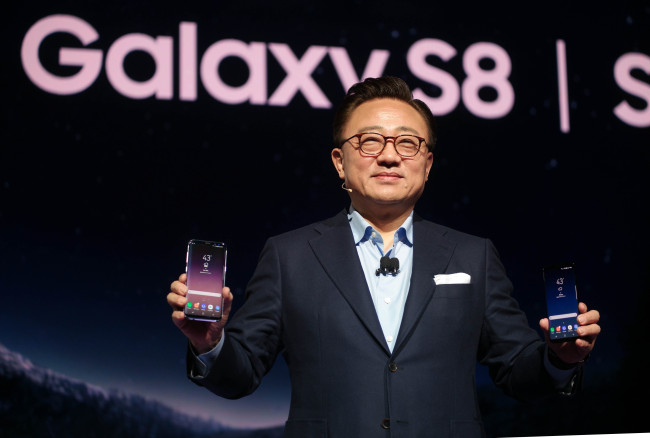 Lee Sang-hyun, marketing chief of the tech giant’s foundry business said Samsung will try to diversify its customer base and swiftly deploy cutting-edge extreme ultraviolet lithography equipment on its way to become a global foundry powerhouse.

“Samsung has started the production of 10-nanometer chips and plans to produce 8-nano chips in the later half of this year,” said Lee, talking about the company’s chip business roadmap.

By the end of 2018, Samsung will start the pilot production of 7nm chips based on EUV lithography tech which is used to etch the circuit design on a silicon wafer. Utilizing Samsung’s smart scaling solution, it plans to start producing the first batch of 6nm chips in 2019 while a 4-nm chips equipped with gate-all-around transistors will be mass-produced in 2020.

“The Galaxy Note series, first launched in 2011, come with a range of multimedia features, including the large-size display, and S Pen, only available with the smartphone models,” said an executive from the firm during the conference call. “The Galaxy Note 8 will feature more advanced, richer multimedia functionalities,” he added.

The new Note is anticipated to be fitted with a 6.3-inch display with an 18.5:9 aspect ratio, a Bixby artificial intelligence solution that supports Korean and English, 6GB RAM, and a 3,300mAh battery.

Samsung is also preparing to announce a new dividend policy for 2018-2020 by the end of this year.

In line with the plan, the company has acquired around 1,125,000 shares of treasury stocks including common and preferred stocks from April 28 to July 24.

The company will continue the buyback scheme as part of its efforts to increase shareholder value this year. By Oct. 27, the firm plans to repurchase and cancel 670,000 common shares and 168,000 preferred shares.